1 ON 1 WITH GARIN BJORKLUND 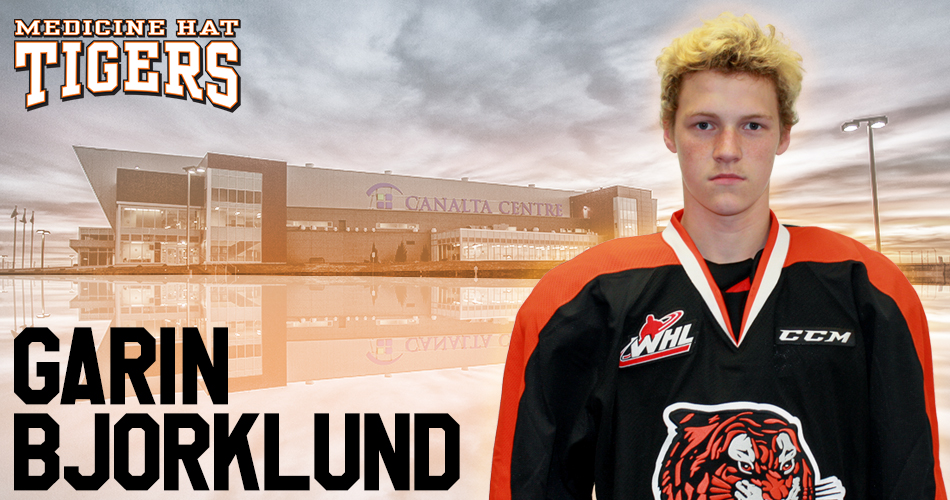 Medicine Hat, AB — On May 4th, 2017 the Medicine Hat Tigers and the other 21 clubs of the Western Hockey League made the dreams of hundreds of bantam aged kids. Getting drafted to one of the premier leagues in Canada is filled with hard work, hours of practice and maybe a little luck. For Tigers 2017 1st Round selection Garin Bjorklund, it is just the beginning.

Medicine Hat was awarded the 21st overall pick in the Bantam Draft with the success of their 2016-17 campaign and 2nd best record in the WHL. The Tigers decided to go with a goaltender with their pick, the first netminder to be taken in the draft and first goaltender taken by the Tigers in the 1st Round since Tyler Bunz was taken in 2007.

Insert Garin, a Grande Prairie, AB born kid with high end talent, who will have expectations of tending the Tigers net for years to come when he becomes eligible.

We sat down with Garin to get to know him a bit better heading into next season….

Q: How does it feel to be apart of the WHL and the Medicine Hat Tigers?

A: It’s an unreal feeling. One of the best in the world. I was very excited coming to camp to meet everybody, the coaches, other players and see what the city of Medicine Hat has to offer.

Q: Heading into the draft, what did you know about the City of Medicine Hat?

A: We came a few times to play the Tigers Bantam AAA team, I didn’t play in those games but driving through the city it looks really picturesque and beautiful.

Q: What do you have to do to get WHL ready over the next few years?

A: Being a goaltender you have to be mentally strong and that is something I want to prepare myself for the WHL. You can play in front of thousands of people and you can’t let a bad goal get to you, so mental toughness is key. I also want to get bigger and stronger physically to be in the best shape possible.

Q: Winning the Best Goaltender award in your league last season, does that give you confidence that you can bring that same elite level competition to the WHL?

A: It was a great honor to be awarded that trophy, you work hard all year long to try and be the best you can be, however at the end of the day it is just an award and you have to put it in your back pocket and work even harder. I try to bring an elite style level of competition to the rink every night. As a goaltender it is crucial to have that kind of mindset because you are the reason of winning and losing.

Q: You are the first goaltender taken in the 1st Round by the Tigers since Tyler Bunz in 2007, what are you expectations heading into next season? Expectations for yourself?

A: My expectations are simple and easy, be the best player that I can be. I want to show everyone that I deserved to be the first goalie picked of the draft and I deserved to be drafted in the 1st Round.

Q: Finally, who was the biggest influence on your hockey career to get you to this point?

A: Definitely my brother. He was drafted by the Tri-City Americans in the 2015 Bantam Draft and since that time I always wanted to be drafted in the WHL, especially try and be picked higher than him. So having that kind of competition helped raise my game and aspire to be something great and May 4th was the start of something special.

Medicine Hat fans came out over the past weekend to watch Garin and the rest of the 2017 Draft class at the Tigers annual Orientation Camp which took place at the Family Leisure Centre.

The Tigers are excited about Garin and look forward to making his progress towards earning a WHL contract and suiting up in the Canalta Centre in the near future.