1 ON 1 WITH NOAH DANIELSON 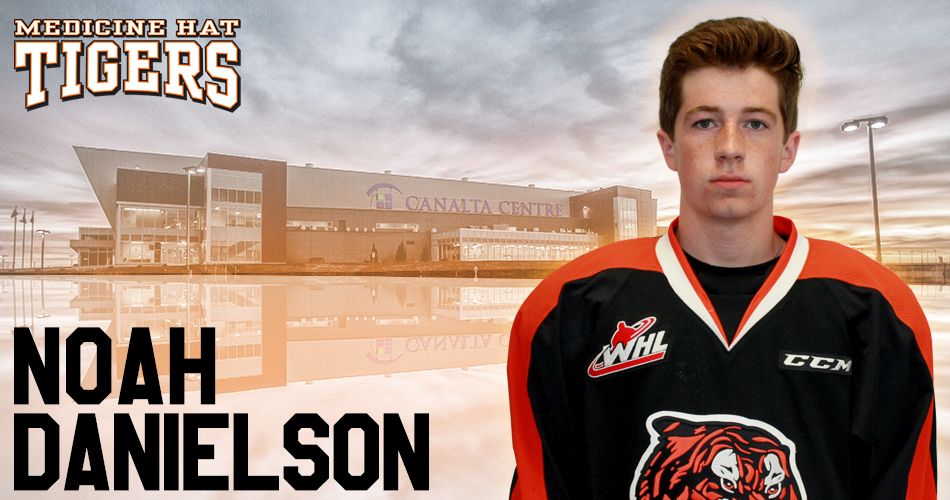 Medicine Hat, AB — On May 4th, 2017 the Medicine Hat Tigers and the other 21 clubs of the Western Hockey League made the dreams of hundreds of bantam aged kids. Getting drafted to one of the premier leagues in Canada is filled with hard work, hours of practice and maybe a little luck. For Tigers 2017 4th Round selection Noah Danielson, it is just the beginning.

Medicine Hat knew coming into the draft that lots of high end skill was up for grabs, especially in the Alberta Major Bantam Hockey League. Noah Danielson was one of those players teams must have been watching. The Olds, AB native led the entire AMBHL in scoring, recording 78 points in 36 games, including 36 goals. When Danielson fell to the 4th Round, it was an almost automatic pick for the Tigers, who have always loved high end skill from their prospects.

Noah’s high end talent will put lots of pressure on the 14 year old. But he knows his success will depend on growing as a player before his first season of eligibility (which is slated for 2019-20).

We sat down with Noah to get to know him a bit better….

Q: How does it feel to be apart of the WHL and the Medicine Hat Tigers?

A: It is a great honor to be a part of the Western Hockey League. I have heard so many good things about the organization and I am really excited to get my career started here.

Q: Heading into the draft, what did you know about the City of Medicine Hat?

A: I knew that the city was a small tight knit community. It’s not as big as a Calgary or anything but it is beautiful and warm. I am looking forward to seeing it up close and personal over the next few years.

Q: What do you have to do to get WHL ready over the next few years?

A: *laughs* I don’t think I am going to get any taller over the next few years, so I have to get physically stronger. The WHL is full of guys that are bigger and you have to prepare yourself accordingly, so I will be spending my time in the gym and training as much as possible.

Q: The Tigers drafted your teammate Brett Meerman with their following pick; do you think you guys would continue your chemistry together in the WHL?

A: Brett and I have been playing together for years, from spring hockey to summer hockey and then into our seasons here in Red Deer. We hope to continue our chemistry moving forward and it would be awesome to play on a line with Brett in the future.

Q: What do you have to do to be able to continue your success in the WHL offensively?

A: I like to watch a lot of hockey when I am not playing, pick up on little things the pros are doing offensively and defensively. I also think I just need to continue working on my shot, to score goals in the WHL you need a quick shot to catch goalies off guard. More importantly, just listen to my mentors, my coaches and teammates to help me along to become a better player.

Q: For the Tigers fans out there, what type of player are you and what do you expect to bring to the Tigers when you arrive in Medicine Hat?

A: I am a dynamic offensive player who likes to shoot the puck and create lots of offense. I hope to bring to the Tigers lots of points as one day I would like to lead the entire league in scoring

Q: Finally, who was the biggest influence on your hockey career to get you to this point?

A: Definitely my parents.  They have been there since day 1 in my hockey life, always trying to get me to be the best player I can be. They have paid everything for me as well and they are the biggest influence to where I am right now.

Medicine Hat fans came out over the past weekend to watch Noah and the rest of the 2017 Draft class at the Tigers annual Orientation Camp which took place at the Family Leisure Centre.

The Tigers are excited about Noah and look forward to making his progress towards earning a WHL contract and suiting up in the Canalta Centre in the near future.