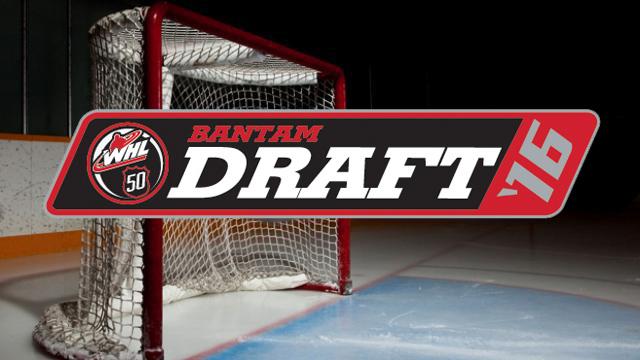 Medicine Hat, AB — The Medicine Hat Tigers stocked the cupboard at the 2016 edition of the Bantam Draft selecting 9 players, including 5 forwards, 3 defenseman and 1 goalie. The last time the Tigers selected 9 players in the draft was just a couple years ago during the 2014 edition, when James Hamblin was taken 17th overall.

The draft was highlighted by the Tigers 1st round selection when they took 6’1 forward Josh Williams from the Yale Hockey Academy. Williams scored 59 points (35G, 24A) in 25 games and was named the Canadian Sport School MVP for the Bantam Prep Division.

“Josh can play both a skill and physical type of game. He is a big body and has shown that he is capable of scoring at the Bantam level. We are thrilled to have Josh and his family join our organization,” said Tigers Director of Player Development Darren Kruger.

Medicine Hat selected size in this year’s draft as 7 of their 9 picks stand in at 5’10 or taller with their tallest pick being goaltender Kaleb McEachern who fills the net with his 6’4 frame. Second round pick Daniel Baker also fills out a large defense corps selected by Tigers scouts as the 6’2 Edmonton native recorded 41 points in 32 games to go along with 82 penalty minutes.

Medicine Hat capped off the draft in the 9th Round selecting 16 year old Logan Ganie who played with the Lloydminster Bobcats Midget AAA squad this past season, scoring 38 points in 33 games (18G, 20A). Ganie was also selected in the 2014 Bantam Draft by the Kamloops Blazers in the 9th round but went unsigned, allowing the Tigers to draft the Irma, Alberta native.

Next up for the Tigers is their annual prospects camp where many of the players selected will come out to show the coaching staff their talents. The camp takes place in late May.

Dates and times will be available at a later date.