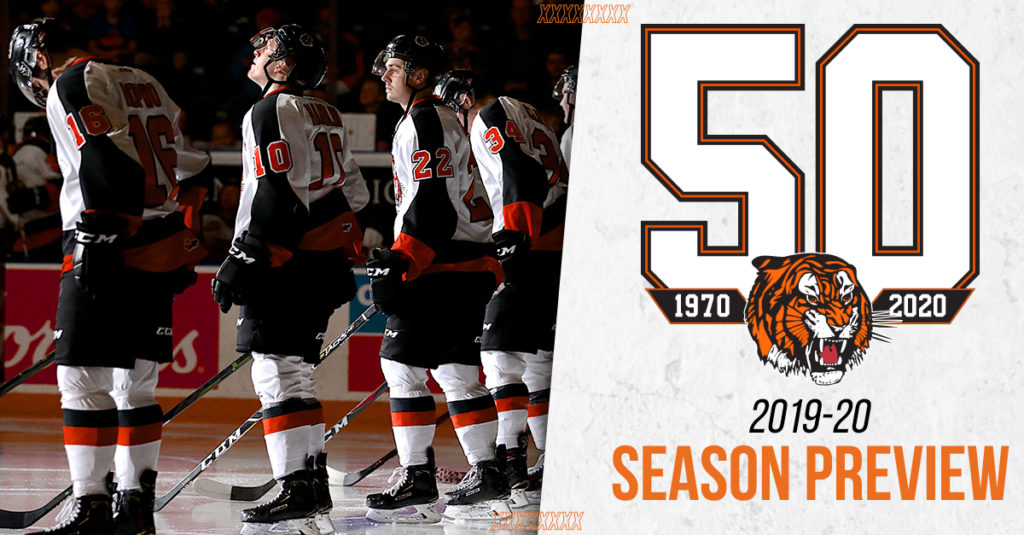 Medicine Hat, AB – The Medicine Hat Tigers are ready to kick off their 50th anniversary season this weekend.

“We are a bit of an unknown. Where we are going to be, no one knows for sure. For me, we are a team that relies on our community and our fans who have always been a big part of our success and that won’t be any different this year,” said Desjardins.

The Tabbies’ roster boasts 16 veteran players including second year captain James Hamblin who led the team in scoring last season with 77 points (33G, 44A) in 67 games. The 20-year-old Edmonton native is a hard-working, two-way centre who embodies what it means to be a Tiger and he thinks through hard work they will find success this season.

“The key to success will be to outwork our opponents. We have the skill and we have speed, so if we can outwork them as well we should do great,” said Hamblin.

Along with Hamblin, the Tigers will have veteran forwards Brett Kemp, Ryan Chyzowski, Tyler Preziuso, Bryan Lockner, Elijah Brown, Corson Hopwo, Hayden Ostir, Baxter Anderson and Nick McCarry who will all be hoping to have big years.

“I think it is a new beginning, a chance where all of us have a lot to prove. Every guy on this team was disappointed last year when they lost and they are looking for a chance for redemption this season. A lot are wanting to sign a pro contract and know they have to have big years,” said General Manager and Head Coach Willie Desjardins.

Adding to the offensive depth will be rookie forwards Noah Danielson, Caleb Willms, Jonathan Brinkman and Cole Sillinger who will all be hoping to leave their mark on the team.

Defensively, the Orange and Black will look to veterans Cole Clayton, Trevor Longo, Daniel Baker, Eric Van Impe as well as newly acquired 20-year-old Parker Gavlas to set the tone. Joining them on the blue line will be rookies Damon Agyeman, Dru Krebs and Ryan Watson. Agyeman, the 17-year old Calgary native, played seven games for the Tigers last season as an affiliate player and will be looking to use that experience to make an impact this season.

“I think last year being around the team and playing some games was huge for me,” said Agyeman. “Coming into this year I had more confidence than the year before and knew a little more of what I needed to do to be successful.”

The Tabbies goaltending tandem will comprise of Mads Søgaard and rookie Garin Bjorklund. Søgaard had a strong rookie campaign with the Orange and Black last season and he was drafted in the second round of the 2019 NHL Entry Draft by the Ottawa Senators. He is coming into his second year with the team hungry for success.

The Tigers will open their historic season with a home and home series against Central Division Rivals, the Lethbridge Hurricanes. Friday, the Tabbies will travel West on Highway Three for a 7 PM game at the Enmax Centre. Saturday, the team will return home to host the ‘Canes at the Canalta Centre. Kal Tire will be hosting a tailgate party in the Canalta Centre parking lot starting at 5 PM with all proceeds going to the Medicine Hat and District Food Bank Brown Bag Lunch Program. The puck will drop at 7:30 PM but fans are encouraged to be in their seats by 7:10 PM for a 50th anniversary tribute video and player introductions.