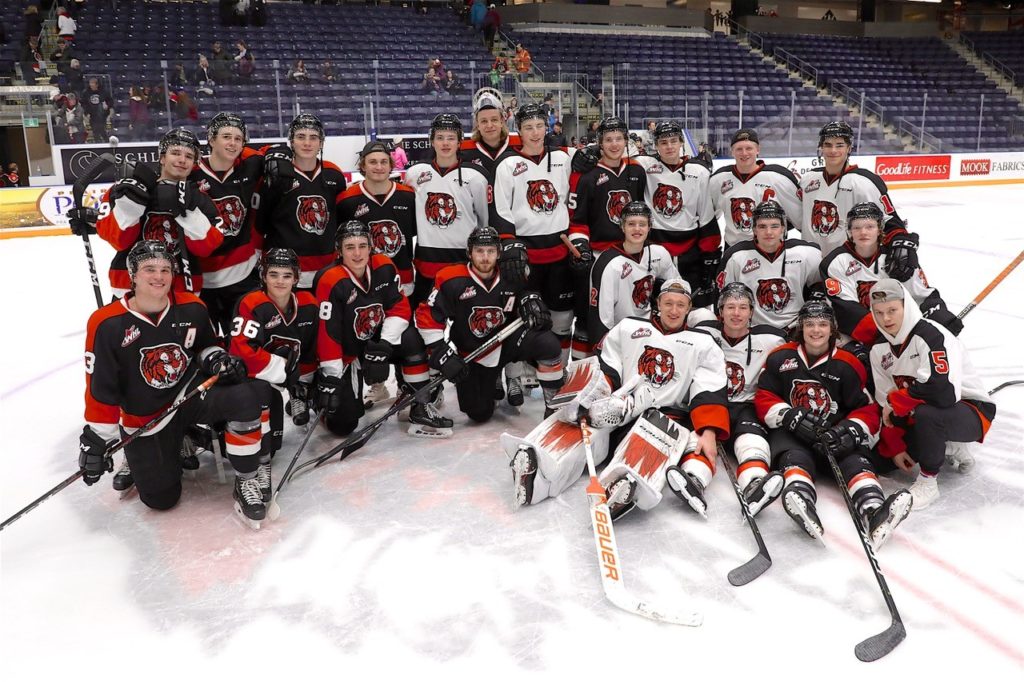 Medicine Hat, AB — The Medicine Hat Tigers took a break from action this week to celebrate giving back to the community with their Annual ATB Financial Skills Competition in support of the MS Society.

In lieu of tickets, donations to the MS Society were accepted at the door and this year’s event raised $4,620.50.

During the skills competition, the Tigers competed in seven different events and kept all those in attendance happy and entertained.

James Hamblin and Ryan Jevne were the team Captains for this year’s event. Hamblin won the coin toss and selected Tyler Preziuso first overall. The two Captains then did a snake draft to select the rest of their teams and they drafted their coaches as well as their hosts this year.

Fastest Skater: Each team captain put forward their top three fastest skaters to see who would be crowned this year’s fastest skater.

Dylan MacPherson from Team Hamblin won fastest skater with the final time of 14.68 seconds.
Most Accurate Shot: Each team put forward three shooters to fire at 4 targets. Whoever could hit all four targets in the least amount of time won the event for their team. This year at the request of the goalies, they also participated.

Logan Christensen of Team Hamblin won by hitting all four targets in 13.70 seconds.
.
Hardest Shot: Each contestant had two shots to try and break the 100 mph barrier.

Bryan Lockner of Team Jevne won Hardest Shot with 94 mph.
.
Showtime Shootout: Each player has two chances to impress the judges and record the highest score possible. Each round was worth 40 points.

Team Hamblin’s Jaxon Steele won Showtime Shootout with an impressive 82 points.
.
Team Relay: There were 2 groups (1 from each team) in this event made up of 6 players each. The group who was able to do the relay in the fastest time won.

Team Hamblin won the Team Relay by finishing in
.
Elimination Shootout: The last man standing wins.
Daniel Baker was the last man standing to win the Elimination Shootout for Team Jevne.
.
3 v 3 Hockey: The teams played 10 minutes of 3 v 3 hockey. Going into the final event the score was already 4-2 for Team Hamblin.
Team Jevne Goal Scorers: Ryan Jevne
Team Hamblin Goal Scorers:  James Hamblin, Logan Christensen, Jordan Hollett (EN)
.
Team Hamblin won the 2019 ATB Skills Competition with a final score of 7-3.
Thank you to all the fans who came out to the event to cheer the players on. Your generosity is what made the event a success.
More News