TIGERS CLAW BACK TO WIN 4-3 IN A SHOOTOUT 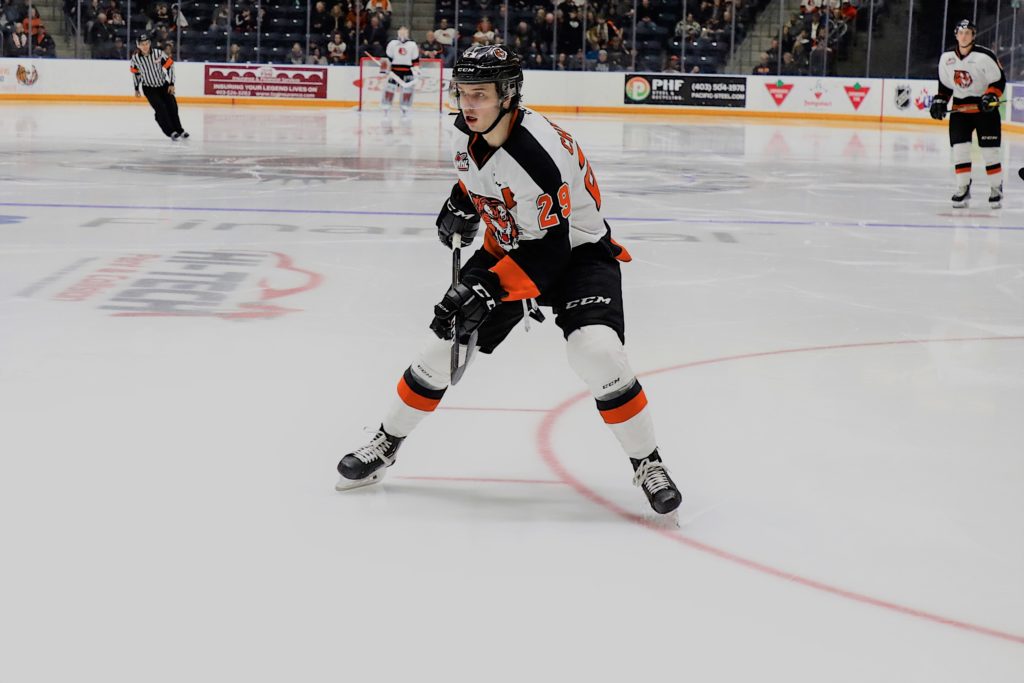 Medicine Hat, AB — The Medicine Hat Tigers kicked off their 50th anniversary season by defeating their Central Division rivals, the Lethbridge Hurricanes 4-3 in a shootout.

The Hurricanes took the lead late into the first period and held on throughout most of the game. Midway through the final stanza when trailing 3-1, the Tabbies’ alternate captains Bryan Lockner and Ryan Chyzowski scored just over a minute apart to tie the game up and send it to overtime. Neither team was able to score in the three on three overtime and the game went to a shootout. Chyzowski, the Tigers’ fourth shooter, scored the game winner.

Veteran forward D-Jay Jerome opened the scoring to give the Hurricanes the early lead in the first period before Dino Kambeitz scored in the second stanza to make it a 2-0 hockey game. Both Jerome and Kambeitz joined the Hurricanes from the Victoria Royals this past summer.

Shortly after Kambeitz’s goal while on the power play, Brett Kemp fed the puck to rookie forward Cole Sillinger who did not hesitate to beat goaltender Carl Tetachuk glove side to score his first goal of the season. Elijah Brown also assisted on Sillinger’s goal.

Early into the final frame, rookie Zack Stringer intercepted the puck and passed to Jacob Boucher who had a shorthanded breakaway and scored to give the Hurricanes the 3-1 lead.

Midway through the period, Jonathan Brinkman sent a beautiful pass to Lockner who buried the puck into the net.

Just over a minute later with traffic in front of the net, the puck bounced onto the tape of Chyzowski’s stick who was able to beat Tetachuk to score his first goal of the season. Trevor Longo assisted on the play that sent the game to extra time.

Goaltender Mads Søgaard started in net for the Tigers and stopped 34 of 37 shots faced. Lethbridge’s Tetachuk turned aside 48 of 51 shots faced.

The Tigers are 1-0-0-0 and they will return home to the Canalta Centre for their home opener against the Hurricanes. The game will be brought to you by Kal Tire who will be hosting a tailgate BBQ outside the Canalta Centre at 5 PM by donation to the Medicine Hat & District Food Bank. Doors will open at 6:30 PM and fans are encouraged to be in their seats by 7:10 PM for a special video presentation and player introductions.