TIGERS FINISH BC SWING BY FALLING 7-3 TO THE BLAZERS 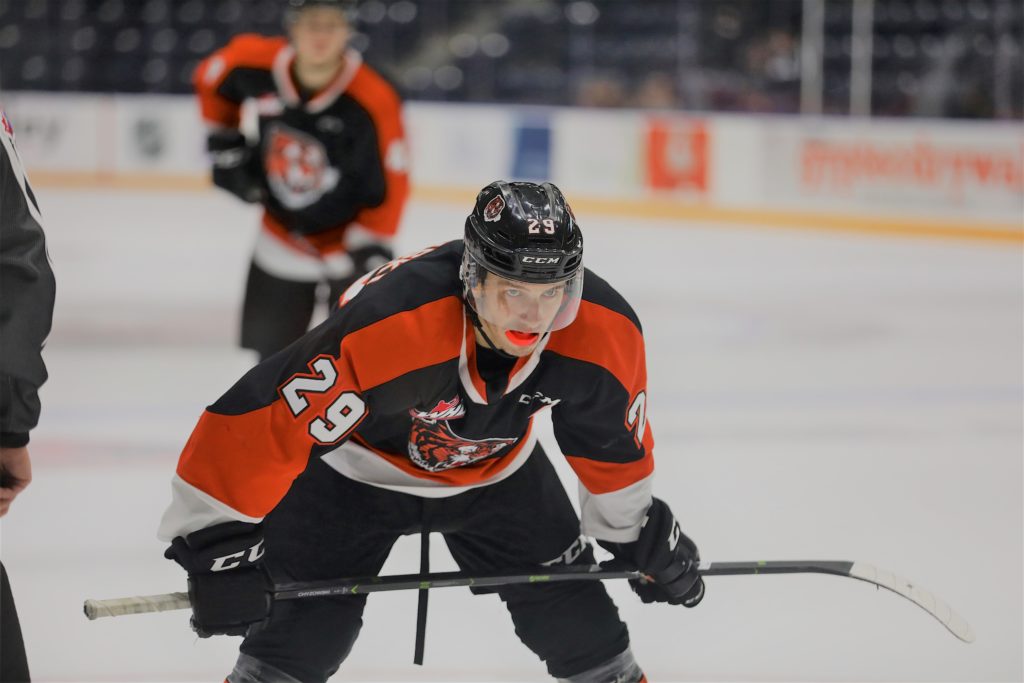 The Tabbies finished the trip with a 3-2-0-0 record improving their season record to 12-6-1-0. Captain James Hamblin had a three point night (1G, 2A) for the Tabbies on Saturday and finished the road trip with 11 points (6G, 5A).

The Kamloops Blazers scored three goals on their first 10 shots just under nine minutes into the game. Early in the game, Kyrell Sopotyk opened the scoring. Ryan Hughes scored the Blazers’ second goal before Connor Zary added a power play goal. Tigers netminder Mads Søgaard left the game after Zary’s goal and he was relieved by Garin Bjorklund.

Late in the frame, Jonathan Brinkman scored on the power play. Brinkman’s third goal of the season was assisted by Brett Kemp and Hamblin.

The Blazers responded quickly and Hughes scored his second goal of the night 16 seconds after Brinkman’s goal to make it 4-1 for the home team at the end of the first period.

Hamblin netted his 12th goal of the season to bring the Tigers within two in the second stanza. Corson Hopwo assisted on the play.

Midway through the period, Zary scored his second goal of the night for the Blazers before Zane Franklin added one to make it 6-2 after 40 minutes of play.

Franklin scored his second goal of the night on a power play just over five minutes into the final frame. Late in the game, Tyler Preziuso scored his seventh goal of the season on a play from Hamblin.

Bjorklund made 26 saves on 30 shots faced while Blazers goaltender Dylan Garand stopped 37 of the Tigers’ 40 shots.

The Orange and Black will travel to Red Deer Friday, November 15th to battle the Rebels. On Saturday, November 16th the Tigers will return home to the Canalta Centre to host the Edmonton Oil Kings. Saturday’s game will be the team’s first home game since October 15th and it is a NewRock Developments Chuck a Puck night in support of Medicine Hat Skateboarding Association. The game will start at 7:30 PM and tickets can be purchased in person at the Canalta Centre Box Office or online.