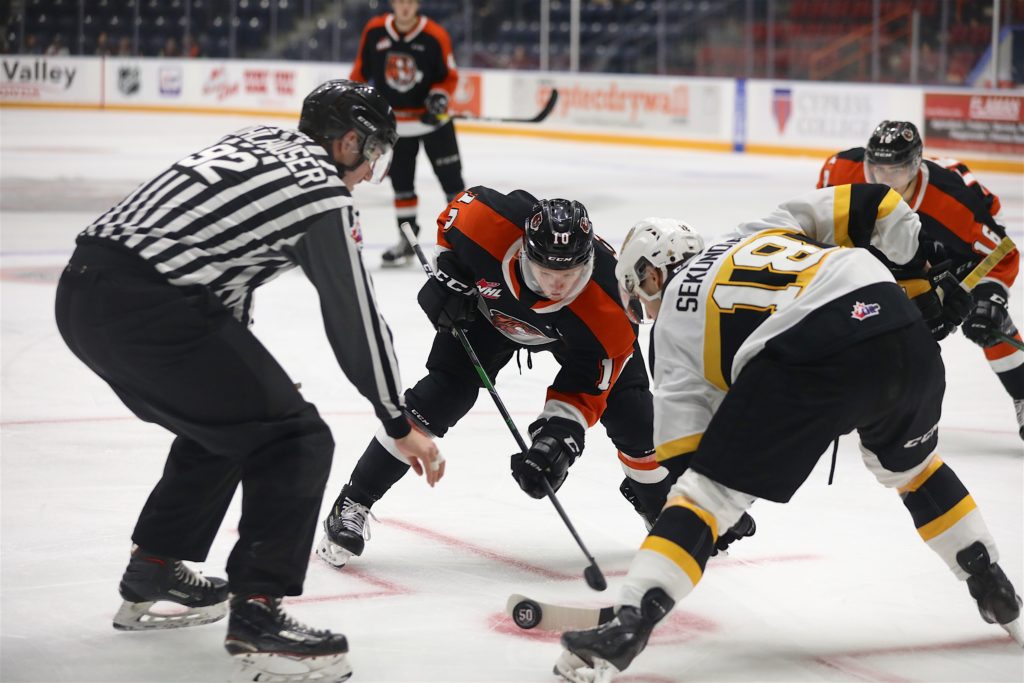 Medicine Hat, AB — The Medicine Hat Tigers were robbed 4-3 by the Brandon Wheat Kings who scored their game winning goal with one second left on the clock.

Leading 2-1 heading into the final frame, the Tigers allowed the Wheat Kings to score twice 51 seconds apart to make it 3-2 for the home team. Late in the fame, Captain James Hamblin set up Noah Danielson to score what would have been the game tying goal but in the final rush of the game, the Wheat Kings scored to take it.

Hamblin suited up for his 300th career WHL game with the Tigers in Tuesday’s contest and he collected his 150th career WHL assist. He is the 10th player in franchise history to play in 300+ games for the Tabbies.

Late in the opening frame while the Tabbies were on their third power play of the night, Cole Sillinger and Ryan Chyzowski combined for a quick give and go before Sillinger scored his 14th goal of the season. Their linemate Brett Kemp also assisted on the play to give Medicine Hat a 1-0 lead.

Early in the second stanza, Wheat Kings’ leading scorer Luka Burzan scored a power play goal to bring the game back to a stalemate.

With just over six minutes remaining in the middle period while the Tigers were on their fourth power play of the night, Dylan Plouffe played the puck to Cole Clayton whose point shot was redirected into the net by Corson Hopwo to regain the lead for the Tabbies. Hopwo’s goal is his ninth of the season.

In the final frame, the Wheat Kings scored twice 51 seconds apart to take a 3-2 lead. Ty Thorpe scored a shorthanded goal before Ridly Greig stepped out of the penalty box and scored to give Brandon their first lead of the night.

Late in the frame, Hamblin won the puck from the Wheat Kings in their zone and he set Danielson up to score his second goal of the season and tie the game 3-3.

With one minute remaining in the game, Greig scored his second of the night to steal the game from the Tigers.

Medicine Hat is now 25-12-1-1 and they will continue their road trip by traveling to Winnipeg to play the ICE Wednesday night. After Wednesday night’s game the Tigers will return home to host the Moose Jaw Warriors Friday night for the first game of a home and home series with the Warriors. Tickets for Friday’s game can be purchased in person at the Canalta Centre Box Office or online.