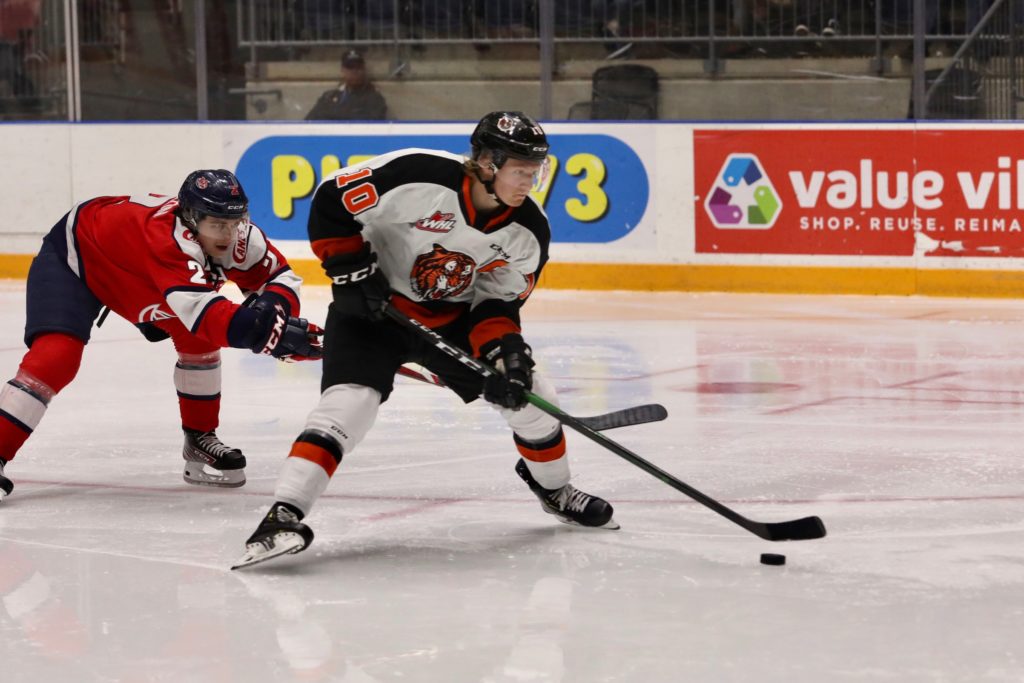 Medicine Hat, AB — The Medicine Hat Tigers got off to a hot start in the first period led by their Captain James Hamblin and defeated the Lethbridge Hurricanes 6-2.

Hamblin had a four goal game including a natural hat trick in the first period while linemate Lukas Svejkovsky collected a pair of assists in his 100th career WHL game.

Twelve seconds into the game Hamblin buried a rebound to score his first of the night. Corson Hopwo and Svejkovsky combined on the play.

Three minutes and forty-seven seconds later, Hamblin potted his second of the night on a play from Svejkovsky and Daniel Baker.

In the final minute of play in the opening frame, while the Tigers were on the penalty kill, the Hurricanes defenceman looks an edge and Hamblin collected the puck before tearing away to score his third of the night shorthanded. The Tabbies headed to the dressing room leading 3-0 after 20 minutes of play.

After a goaltending swap to start the second stanza, the Hurricanes were able to get on the board when Dylan Cozens struck bringing the Canes within two.

Just a few moments later Dylan Plouffe would score his eighth goal of the season on the power play with assists going to Cole Sillinger and Ryan Chyzowski. From there the Tigers would not look back.

The third period brought forth much of the same and saw the Tabbies go right back to work.

In case the fans at the rink Saturday evening weren’t treated enough, Hamblin added his fourth of the evening on a great individual effort that saw him make a neat little move to the backhand and extend the Tigers lead to 5-1 with linemate Corson Hopwo picking up the assist.

Justin Hall would keep the Hurricanes involved bringing the game to a score of 5-2.

Chyzowski would go on to rip a puck at Hurricanes goalie Thomson from what many would call an impossible angle and without a doubt goal of the night. Dylan Plouffe and Brett Kemp picked up the helpers.

Rookie goaltender Garin Bjorklund turned aside 26 of 28 shots in net for his 15th win of the season while Hurricanes Carl Tetachuk and Bryan Thomson split the duties for the night. Tetachuk stopped eight of 11 shots while Thomson allowed three goals on 23 shots.

Medicine Hat is 29-12-1-1 and their next game will be Sunday, January 19th when they head to Edmonton to face the league’s best Oil Kings.