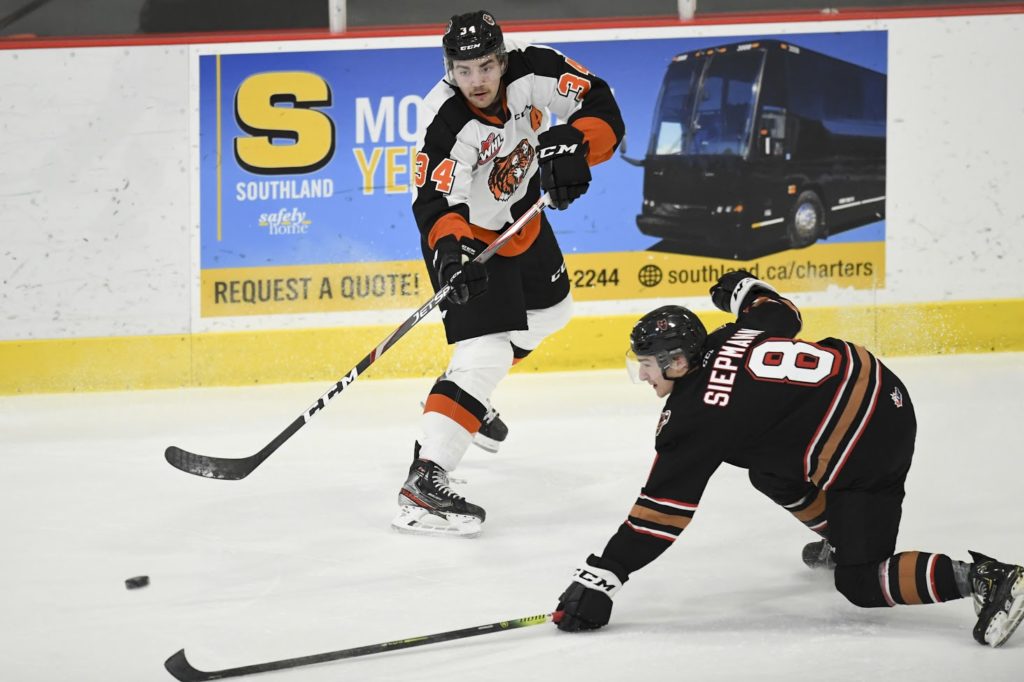 Medicine Hat, AB — The Medicine Hat Tigers hit the highway and took their talents west once again do battle with the Calgary Hitmen at Seven Chiefs Sportsplex on the Tsuut’ina Nation. This is the fifth meeting of the season between these two rivals, with the Tigers holding a 4-1 lead on the season series. Beckett Langkow got the nod in net for the Tigers while Jack McNaughton got the start for the Hitmen. With the Tigers dealing with some injuries, the Orange and Black would be looking to the rookies to step up and play some big minutes.

Brett Kemp took full advantage of a miscue by McNaughton, making no mistake and putting the Tigers up by 1 only 3:14 into the opening period. Only 1:56 later, Corson Hopwo tipped home his 9th goal of the season on the Cole Clayton point shot, with the secondary assist going to Brett Kemp. That would be it for McNaughton as he surrendered two goals on three shots, Brayden Peters relieved him in goal. The Hitmen responded with a goal of their own when Blake Allan just throws the puck on the net and got the puck passed Langkow to bring the Hitmen to within one to make it 2-1 Tigers. Adam Kydd kept the scoring parade going on a nice pass from Orca Wiesblatt. Josh Prokop got past the D-men and tucked the puck under Langkow for his 6th of the season as the Hitmen scored three times in 2:42. The Tigers responded right back when Tyler MacKenzie got his first career WHL goal, going top shelf on the short side on Taber, Alberta product Brayden Peters. These two teams combined for six goals on 26 shots in a wildly offensive first period.

Calgary started the middle frame on the Powerplay as Kemp got called for boarding at the end of the first. Corson Hopwo was awarded a penalty shot after he was tripped up on a breakaway, but Peters was equal to the task, game stayed tied. The Tigers successfully killed off the Hitmen man advantage, their 15th successful against the Hitmen in five games. Tigers Captain Ryan Chyzowski got called for a high stick on Orca Wiesblatt and received a 4:00 double minor. The Tigers special teams come up big again killing off the penalty as the Hitmen are 0/3 with the man advantage. After a wild six goal 1st period, there no scoring in the 2nd, tied up at 3 heading into the final frame.

The first chance of the period would go to Calgary on a 3 on 2, but Roary Neill can’t find an opening and Beckett Langkow keeps the game tied. The Langkow save seemed to spur the Tigers on as they would really start to press and show off their conditioning. The best chance on the flurry went to Okotoks, AB product Dru Krebs as he whistled a howitzer just wide. Tigers rookie Teague Patton scored off a faceoff at 7:19 of the 3rd period, that’s the first goal of his WHL career. The ever creative Lukas Svejkovsky creates some space and beats Peters with a laser to put the Tigers up by two. This game was destined to finish as it started as Adam Kydd gets his 2nd of the night as he goes top shelf on Beckett Langkow to bring the Pink and Black to within one again with 3:43 to go. With the net empty, Calgary’s Riley Fiddler-Shultz gets the second effort to go beating Beckett Langkow with only 10.9 seconds to go.

Off to 3 on 3 overtime we go! Both teams would get some chances, but Brayden Peters stole the show stopping Corson Hopwo on a 2 on 1, then moments later stoning Oasiz Wiesblatt. Langkow had to be sharp as well, as stopping the Hitmen advance. In the wide open overtime Josh Prokop had some space down the right side, but again Langkow stood tall. Brett Kemp took advantage of the aggressive hitmen attack getting in alone and beating Brayden Peters five hole to get the OT winner and the 7th of the season for the Yorkton, SK product.

The Tigers extend their winning streak to five games and will return home to Co-op Place to take on the Hitmen for the final time this season on Monday, April 5. Puck drop is 7:00pm.