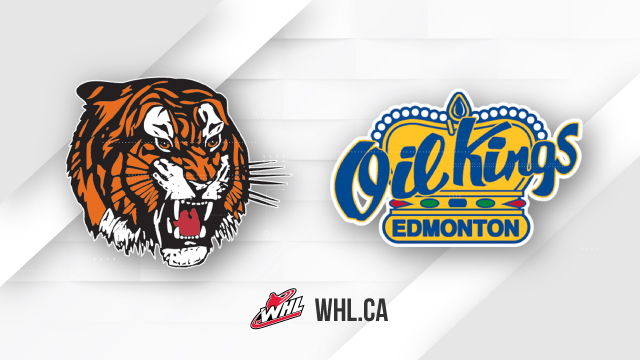 Medicine Hat, AB — The Medicine Hat Tigers took their talents north to the Capital to do battle with the 1st place Edmonton Oil Kings. The Oil Kings took the first two meetings of the season which took place on the second weekend of the season. The Tabbies will be looking get off to a strong start tonight as Garin Bjorklund gets the nod for the Tigers and Sebastian Cossa starts for the Oil Kings.

Great pace to start the game as both teams are looking to prove they are the top dogs in the Central Division. Jake Neighbours took a pass from Josh Williams and drove wide passed Dru Krebs, beating Bjorklund to give the home team an early 1-0 lead. The Tigers got a chance to showcase their potent powerplay with the best chance coming to Brett Kemp as a puck came off the end boards, but the Yorkton product couldn’t get a stick on it. The Oil Kings made it 2-0 when Josh Williams beat Bjorklund over the shoulder to collect his 10th goal of the season.

Oil Kings started the 2nd stanza off with just over a minute left on a man advantage from a too many men on the ice penalty at the end of the 1st, but the Tigers could not capitalize. Tigers kept the pressure up until the media timeout, but were unable to beat Cossa. The teams traded powerplays and chances throughout the middle frame, with Jalen Luypen getting the best chance of the period but he put the puck wide on a 2 on 1. Things opened up in the final 15 seconds of the frame as the team traded excellent, but both netminders were equal to the task, the score remains 2-0.

Jake Neighbours extended the Oil Kings lead to three when he got his 2nd of the night and 8th of the year, with the assist going to Josh Williams. Bjorklund would be called on multiple times to make big saves to keep the Tabbies within reach of the Oil Kings. Medicine Hat found itself in some penalty trouble when Ryan Chyzowski took a charging penalty to give Edmonton a 5 on 3 man advantage. Tigers defenceman Eric Van Impe was then called for a kneeing major on Jalen Luypen, Luypen would leave the game with a lower body injury. The Tigers successfully killed off the extended 5 on 3 as well as the remaining four minutes of the Van Impe Penalty.

Make the final 3-0 Oil Kings as Sebastian Cossa stopped all 30 shots fired his way, while Garin Bjorklund stopped 49 of 52.

The Tigers return home to play the Oil Kings on Saturday at Co-op Place in Medicine Hat. Puck drop is 7:00pm.