TIGERS TAKE ONE FROM THE CANES 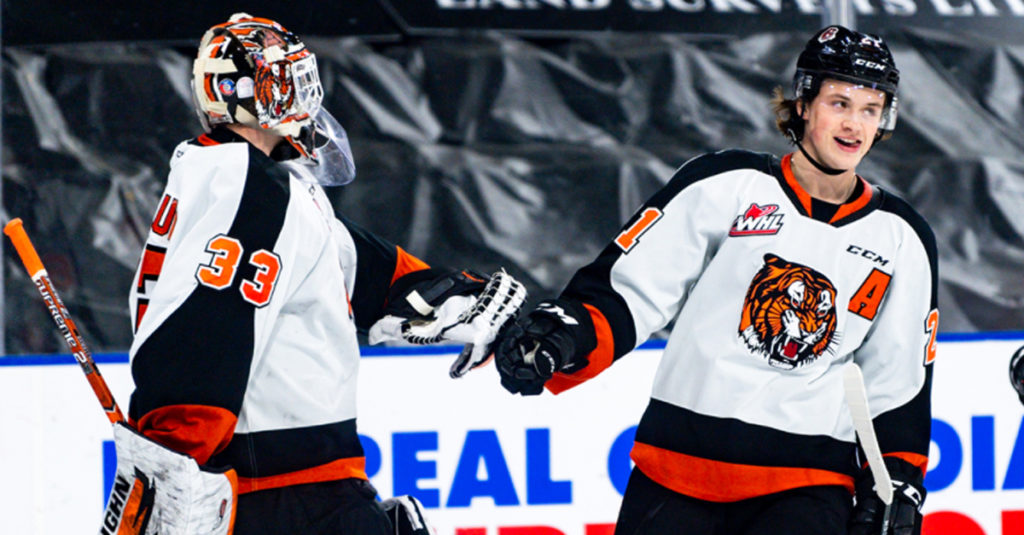 Medicine Hat, AB  — The Medicine Hat Tigers took that old familiar trip down the Crowsnest Highway to once again do battle with the Lethbridge Hurricanes.

It was a bit of a familiar start for these two teams with both teams getting some chances early on. Yorkton, SK product Brett Kemp kicked the scoring off beating Carl Tetachuk to give the Tigers an early 1-0 lead. Assists go to Oren Shtrom and Eric Van Impe. The Hurricanes were able to get the game back to level as Jett Jones got his 5th goal of the campaign.

To the 2nd period we go and Cole Clayton opens the flood gates for the Orange and black as he buries his 9th of the campaign as the Tigers broke out of the Hurricanes zone on a short handed 3 on 1. Clayton kept the puck and put it by Hurricanes netminder Carl Tetachuk. The Tigers were down a man again after Rhett Parsons got called for interference. Different penalty kill, same result as Nick McCarry got in all alone on Tetachuk and tucked the puck past Tetachuk to put the Tigers up 3-1. Two Minutes later Brett Kemp got his 2nd of the night beating Carl Tetachuk clean, Shtrom got his second assist of the night with the other one going Aidan Brook. Lukas Svejkovsky continued to scoring onslaught as Ryan Chyzowski set him up, showing unbelievable patience, and Svejkovsky made no mistake to put the Tigers up by a fist full.

The third period started with some familiar Highway 3 tenacity, with the Tigers trying to put away the ‘Canes and Lethbridge showing they won’t go down without a fight. Pittsburgh Penguins draft pick Lukas Svejkovsky got his 2nd of the night only five minutes into the third period, as he picked up the loose puck and beat Tetachuk above the glove to put the Tigers up by five. Lethbridge got one back on the powerplay with about five minutes remaining the game, but that’s as close as the Hurricanes would come, as the Tigers get back in the win column, beating the Hurricanes by a score of 6-2.

The Tigers are back in action Saturday night at Co-op Place as they play host to these same Lethbridge Hurricanes for game two of this three game series.