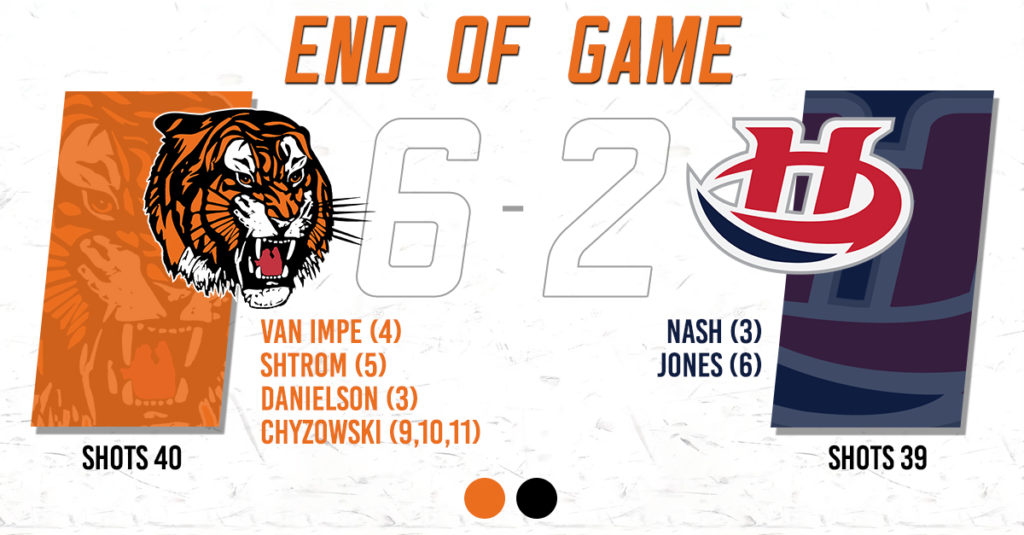 Medicine Hat, AB — After dropping a 6-3 decision at home in Medicine Hat on Saturday night, the Tigers were back on the road for the final meeting of the season between the Tigers and the Hurricanes. Garin Bjorklund started between the pipes for the Tabbies, while rookie netminder Jared Picklyk got the nod for Lethbridge.

These two familiar foes picked this game up right where the last one left off, with both teams getting some quality chances in the opening five minutes. Both teams were doing a great job of shutting down passing lanes and clearing away any loose pucks from the front of the net. It would stay scoreless until the 13:25 mark of the opening period when Eric Van Impe put the puck at the net and beat Picklyk, 1-0 for the Orange and Black. With just under 5 minutes remaining in the period, Garin Bjorklund kicked the leg out and made a great save off of Alex Cotton to keep the Tigers ahead by one. Ty Nash ripped the puck through a crowd and beats Bjorklund to tie the game up at 1, Dino Kambeitz was providing the screen on the play. Chase Wheatcroft got called for a high stick and was given four minutes in the penalty box.

The Powerplay carried over into the 2nd period, but the Tigers were unable to capitalize. The Tigers got another chance on the powerplay when Wheatcroft was called again, this time for tripping. Oren Shtrom put the puck in to the net off of Hurricanes defender Ty Nash to restore the Tigers one goal lead. 2-1 Tigers on the powerplay goal. Garin Bjorklund was called on to stand tall as the Hurricanes got some quality chances. The Tigers went up by two when rookie Oren Shtrom set up Noah Danielson with a beauty pass to the slot and Danielson made no mistake, beating Picklyk clean. The Tigers increased the lead to three as Ryan Chyzwoski made it 4-1 after putting the Lukas Svejkovsky rebound passed Picklyk.

The Tigers get off to a hot start in the third period as Captain Ryan Chyzowski gets his 2nd of the night and 10th of the season with the assists going to Reid Andresen and Carlin Dezainde. Jett Jones answers for the Hurricanes, beating Bjorklund on the wrap around to make it 5-2 with a little over 11:00 minutes to play. Ryan Chyzowski completes the hat trick getting and empty net goal with just over 2 minutes remaining in the game, putting the Tigers up 6-2.

The Tigers come away with the 6-2 victory and have one game remaining in the season and that will take place Thursday evening at Co-op Place when the Tigers will take on the Edmonton Oil Kings. Puck Drop is set for 7:00pm.