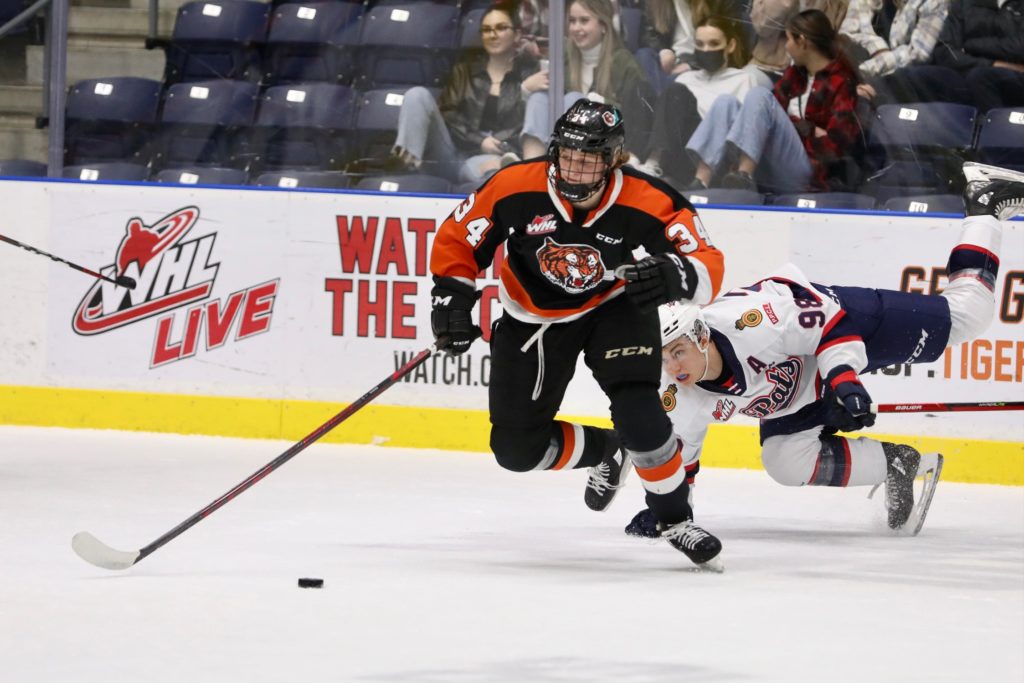 The Tigers welcomed Connor Bedard and the Regina Pats to Co-op Place on Tuesday night. It was the first game of four this season between the two clubs and their first meeting since February 29, 2020.

The Tigers opened the scoring at 3:09 of the first period with Lukas Svejkovsky’s team leading ninth of the season. Dru Krebs took a shot that bounced off some players in front and came out the side of the net. Svejkovsky found the loose puck and buried it to give the Tigers an early lead. Noah Danielson picked up a helper on the opening goal.  The lead wouldn’t last long though as the Pats would get on the board only 44 seconds later. Logan Nijhoff’s shot snuck through Garin Bjorklund’s five hold for his sixth of the season. The Pats scored another goal late in the period but it was called back as there was contact in the crease.

Regina’s star Connor Bedard would give the Pats the lead early in the second period. His wrist shot just snuck under the netminder’s arm for his ninth of the season. The Pats would add to their lead just over four minutes later with a power play goal. Stanislav Svozil found Drew Englot in front of the net and he chipped the puck top corner for his third of the season.

Ashton Ferster’s fifth of the season cut the lead to one with 6:39 remaining in the third period. Rhett Parsons found him in front of the net for a quick one-time shot to give the Tigers a chance to tie things up. Cole Carrier and the Pats had other ideas though. Carrier finished the period off with a natural hat trick in the final five minutes of play. His sixth of the season came off a nice pass from down low that he was able to put away top corner with a quick wrister. He followed that up with a goal 78 seconds later when he came down the left wing and let a quick snap shot go. He finished off the hat trick with an empty net goal while down a man to give the Pats a 6-2 victory.

The Tigers’ next game is Friday, November 26th when the Tigers travel to Brandon to take on the Wheat Kings at Westoba Place. Game time is 6:00 (MST) and can be heard live on CHAT 94.5 FM at tigershockey.com or watched via webcast at watch.chl.ca.