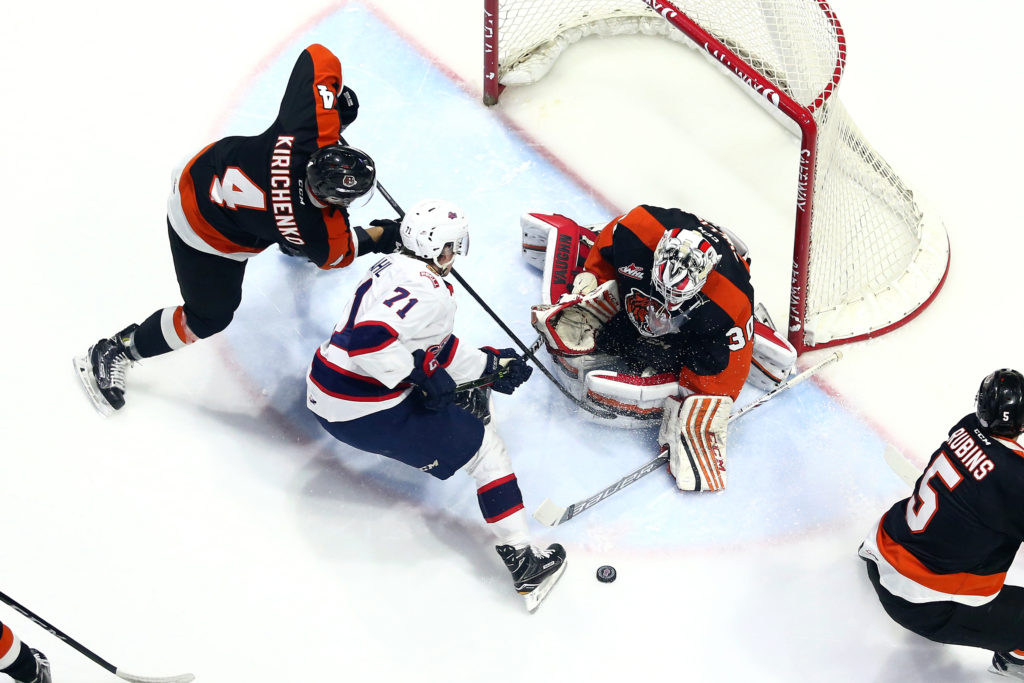 Regina, SK — Well… what can you say about the Medicine Hat Tigers on their current 3 game road trip. Just a few days removed from a come back win in Prince Albert, the Tigers were back it again Friday night, this time against the #2 ranked team in the country, the Regina Pats. Steven Owre would play the hero for a second straight game, scoring the eventual game winner late in the final frame.

It wasn’t the opening period the Tigers were looking for on Friday as they found themselves down by one quickly, just under 5 minutes into the game. Austin Wagner found a loose puck and buried it past an outstretched Michael Bullion who was making his 3rd straight start for Medicine Hat. The Tigers would close the gap nicely on the Pats as fans were treated to a back and forth affair early on. Bullion would stand tall in net stopping 11 of 12 shots his way in the frame as Medicine Hat, despite their chances, couldn’t get one past Tyler Brown and found themselves trailing 1-0 after 20 minutes.

The second period was an even worse start than the first 20 minutes. The Tigers found themselves in a 3-0 hole after the first 3 minutes of the period. Regina got goals from Nick Henry and Josh Mahura to send the home fans into a frenzy. Medicine Hat then clawed their way back into the game with a seeing eye point shot from Jordan Henderson. Henderson let a shot go from the blue line which seemed to fool a screened Brown and break open a 3-1 lead. A little bit later Henderson spotted a streaking Mark Rassell who would also snap one on net. The puck found the top corner and cut into the lead 3-2. But before the Tigers momentum could continue any further Sam Steel, the WHL’s leading scorer, broke in shorthanded and roofed a puck over Bullion and gave the Pats a 4-2 lead heading to the third period.

In the third this time the Tigers would start fast. Captain Clayton Kirichenko followed up the play with Chad Butcher and Zach Fischer. Kirichenko played give and go with his teammate and slid home his 11th of the season to close the gap to 4-3. It was a back and forth game in the third with neither team giving an inch. It almost seemed we had jumped to the playoffs Friday as both clubs were playing similar hockey. Medicine Hat was waiting in the bushes so to speak to pounce on their prey and got a break as a puck got caught up in the skates of a Pats defender. Butcher would be the only one who was able to get a stick on it and netted his 24th of the season to tie things at 4.

With under 4 minutes to play the Henderson would pick off a clearing attempt by the Pats and cruise in on the wing. Steven Owre was standing at the side of the net and yelled for Henderson to throw the puck on net. The defenseman did just that and Owre got a piece of it to change direction and find the back of the net, giving the Tigers a one goal lead. Regina would pull the goalie for the extra attacker but Medicine Hat would hold the fort and Zach Fischer bounced one into the yawning cage to seal the win, 6-4 handing the Pats their first 3 game losing streak of the season.

Medicine Hat finishes their 3 game road trip in Moose Jaw Saturday night before heading home for a pair of games at the Canalta Centre. Tuesday against Kootenay and Friday night against the Edmonton Oil Kings.