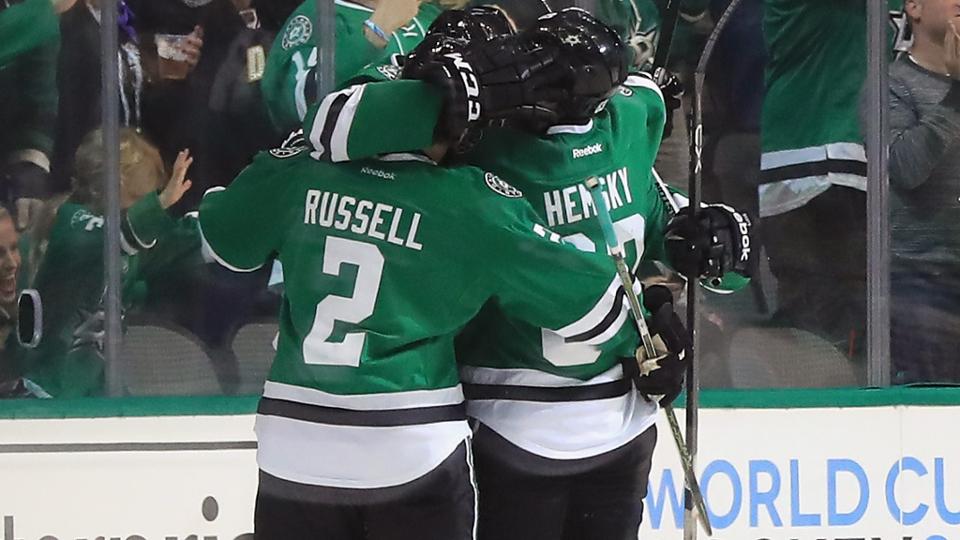 Medicine Hat, AB — The Medicine Hat Tigers will be represented in the 2016 edition of the Stanley Cup playoffs with 8 former players on the roster or in the front office for one of the 16 clubs vying for the Cup.

The two number one ranked teams in each Conference, the Washington Capitals and Dallas Stars both have a flare of orange and black as Dallas sees 3 former Tigers in the organzation. Kris Russell, recently acquired from Calgary at the trade deadline (pictured), Vern Fiddler and General Manager Jim Nill all will be seeking a drink from Lord Stanley’s mug.

Washington has just one lone former Tiger in Jason Chimera who had a strong season for the President’s trophy winning Caps. Chimera recorded 20 goals and 20 assists in playing every game (82) this season. Chimera made a return to the Hat last summer when he was an attendee of the Golf Tournament.

Joining the others are Darren Helm and Ken Holland in Detroit, where for the 25th consecutive season the Red Wings are in the post season dance. Helm was finally able to put together a productive season while being healthy as the last few seasons have been derailed due to the injury bug. Helm posted 13 goals and 13 assists in 72 games this season and will be seeking another Cup ring to his name.

Tiger fans will know this name very well as Jay Bouwmeester suits up with the St. Louis Blues in the first round of the playoffs, however the long time Tiger will be in tough against the Chicago Blackhawks in their matchup. Jay put together a nice season playing in 72 games and recording 3 goals and 16 assists.

Finally, but certainly not least, in one of the Tiger greats in Stacy Roest. Stacey’s playing day are in retirement but the long time Tiger is currently the Director of Player Development for the Tampa Bay Lightning. Roest and the rest of the squad will look to turn last season’s unfortunate loss to the New York Rangers into a Finals berth.

Below are their career stats with the Tigers:

The Tigers wish all 8 players the best of luck on their quest to hoist the Stanley Cup this season!