A FITTING END TO A WILD SEASON 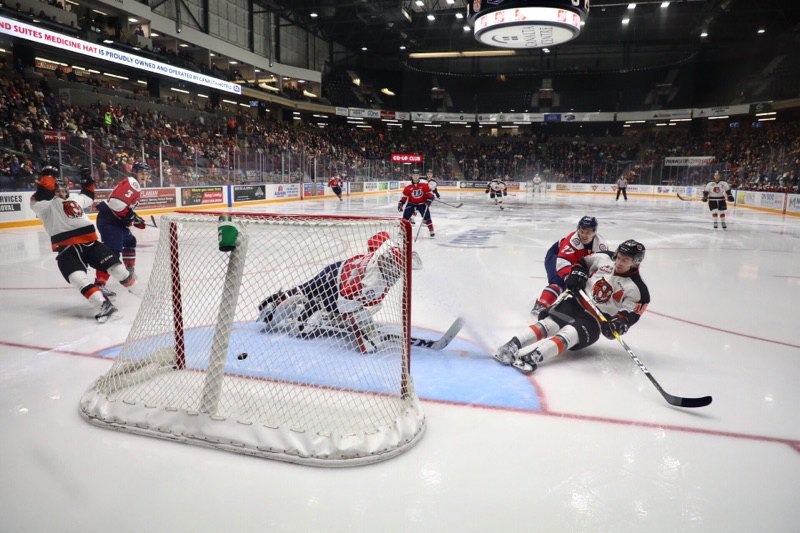 Medicine Hat, AB — It was a fitting end to a wild regular season for the Medicine Hat Tigers.

Mark Rassell, James Hamlin and David Quenneville all scored in the third period to close the book on 72 games with another comeback victory in Saturday’s 8-7 barnburner against the Lethbridge Hurricanes.

Steven Owre set the pace for the back-and-forth shootout just 34 seconds into action with his 26th goal of the year, but Hurricanes captain Tyler Wong quickly stole the show.

The overage forward closed out his final WHL regular season by breaking the 50-goal plateau, beating Tigers goaltender Michael Bullion to secure the milestone after a four-game goalless drought.

Calen Addison and Ryan Vandervlis combined for a pair to steal the lead away after 20 minutes while prompting a change in the Tigers crease. Affiliate goaltender Duncan McGovern stepped in for the second period, his seventh game this season. The 16-year-old Winnipeg product has been playing his season with the Manitoba Junior Hockey League’s Dauphin Kings — who play out of the same arena where the Brandon Wheat Kings will host Medicine Hat in the first round of the playoffs.

The change seemed to light a fire beneath the Tigers. Mason Shaw knotted things back up 35 seconds into the middle frame then Max Gerlach took over Medicine Hat’s third lead of the game two minutes later. Lethbridge responded in kind by yanking Skinner from the crease in favour of their own affiliate goaltender, Adam Swan, and it too prompted a change in pace on the ice.

Tanner Nagel put the Hurricanes back in the conversation by beating McGovern over the glove just over a minute late. While Hamblin pushed the Tigers back out in front with his 22nd of the season midway through the frame, Medicine Hat was once again unable to secure a lead at the break as Alec Baer and Wong struck in succession to push Lethbridge back out in front.

But the Tigers dug in their heels and added another to the long list of come-from-behind victories with a commanding effort in the third.

Rassell struck for his team-leading 36th goal of the year — and the 100th point of his career — to kick off the frame. While Egor Babenko tucked one past McGovern to give the Hurricanes another leg up, Hamblin responded with the timely tying marker then Quenneville completed the comeback with a blistering one-timer on the power play.

McGovern picked up the win with a 18-save effort, while Bullion stopped 12 of 15 in the first period. Lethbridge Skinner was pulled after allowing four goals on 24 shots and Swan stopped 17 in relief.