A LOOK BACK AT THE FIRST HALF 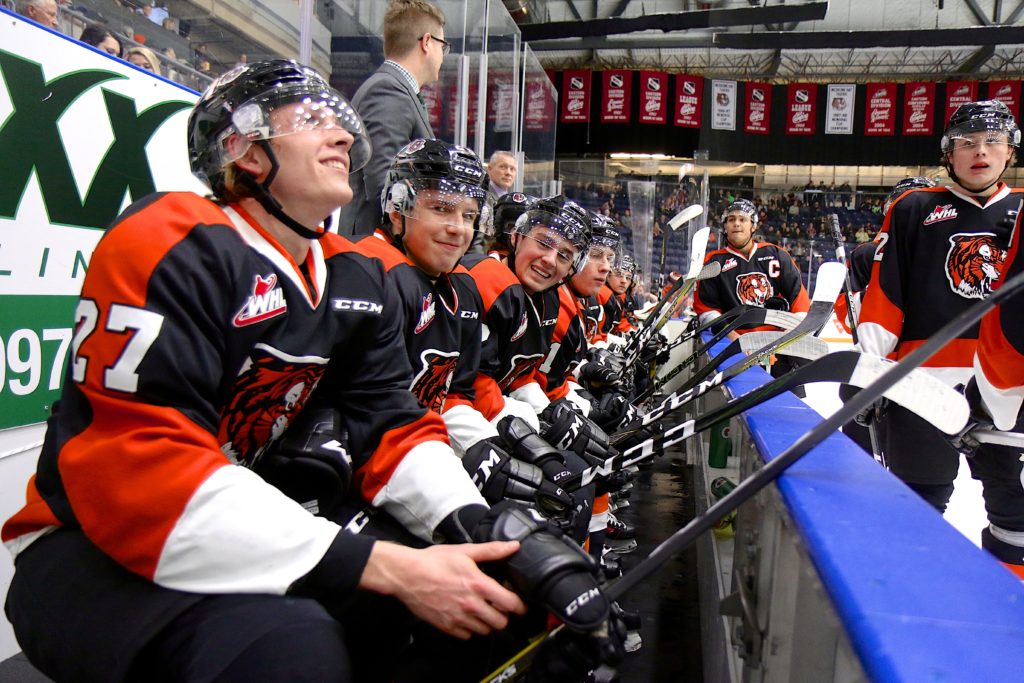 Medicine Hat, AB — With the Christmas break officially underway the Medicine Hat Tigers sent their players home with a 4 game winning streak after a 5-3 victory over the Red Deer Rebels last weekend. Over the course of the 36 games played, some important milestones and events occurred, including one of the best first halves in recent memory.

Let’s break down the first half of the season for the Tigers…….

Strong Start and Leading the Way

The Tigers have had a successful first half schedule which featured long road trips and multiple winning streaks.  At the break the Tigers have a record of 25-10-1-0 which is good for 51 points, first in the Central Division which they have led since the beginning of the season and have a 10 point lead on 2nd place Lethbridge in the Division.

Medicine Hat have the most victories in the Eastern Conference, they sit 3rd in the WHL in points and are 4th in the WHL in winning percentage (.708).  Their 174 goals currently leads the entire league, 5 more than the Regina Pats and the Tigers are one of two teams who have only lost once in overtime or a shootout (Portland).

With the success of the Tigers has come big surprises but none of those surprises fell on Chad Butcher and Mason Shaw who have been in the top 5 in league scoring for majority of the season. Butcher, entering his 5th and final season with the Tigers led the Tabbies in scoring last season with 74 points and already has 53 at the break. Shaw on the other hand plays alongside Butcher and has almost eclipsed last years totals in half the games.

Butcher has been on a tear. At the break Butcher has 16 goals, 37 assists, and 53 points.  He sits tied for 2nd in the league scoring race, just behind Regina’s Sam Steel. His 37 assists ranks 2nd in the WHL behind teammate Shaw. Butcher ended the first half with a 7 game point streak recording 13 points in that span and has only gone pointless in back to back games once this season.

Shaw on the other hand is right up there in league scoring recording 53 points, just 7 shy of his career high set last season with 60. Shaw has led the league for majority of the year until the last few weeks when the duo of Adam Brooks and Steel from Regina caught up. Shaw’s 42 assists leads the league in that category and sits 4th in power play assists with 17. In Shaw’s career as a Tiger he currently is averaging 0.98 points per game.

At the end of last season the Tigers Max Gerlach’s scoring seemed to slow down, seeing him only find the back of the net 12 times after a torrid start to his Tigers career. This season however the Texas born product looks rejuvenated and has more jump to his game. His strength and speed has allowed Gerlach to jump to 3rd in the WHL in goals and there looks to be no slowing down so far.

Gerlach on the season has 23 goals and 11 assists, good for 34 points just 11 off his totals from last season. Gerlach is the first American born player with back to back 20 goal seasons since Emerson Etem donned the Tigers uniform.

When the Tigers listed Mark Rassell before the 2014-15 season they didn’t expect the big winger to be one of the offensive leaders. Fast forward to 2016-17 and Rassell is turning heads. Looking bigger, stronger and faster Rassell has lit up the WHL this year, eclipsing all totals after the first 36 games.

Rassell has 17 goals, 13 assists for 30 points, 3 more than his previous career best set last season. Where Rassell excels the most is on this penalty kill with teammate James Hamblin. The duo have caused havoc for opposition power plays. Rassell’s canny ability to strip the puck away and breakaway speed as allowed him to amass 6 shorthanded goals already this year, which currently leads the league.

If Rassell continues his production and work ethic, pro scouts could come knocking this summer.

With 14 players over double digits in points this season the Medicine Hat Tigers are getting an all-round offensive game, no wonder they lead the league in scoring! Break out seasons from second year forwards James Hamblin, Zach Fischer and Ryan Jevne has allowed the Tigers brass to play a 4 line game. Rookies Ryan Chyzowski and Gary Haden provide depth up front as well to a balance the attack.

More importantly is the offensive game from the back end. David Quenneville leads all WHL defenseman in scoring with 44 points and 19 goals, 14 of them on the power play courtesy of his booming slap shot. Captain Clayton Kirichenko is having a career year as well recording 31 points, 28 of those assists, setting new career highs in both categories. Kirichenko also just recently passed the 200 games played mark for his WHL career which spans 4 seasons.

The Tigers European production has also been a big help with hulking Swede John Dahlstrom collecting 33 points in 32 games and 6’5 d-man Kristians Rubins picking up 13 points in 26 games, but bringing a good physical defensive game to the blue line. Dahlstrom will miss some time coming up because of the World Junior Championships and Rubins, who is also headed to the World Juniors with Latvia has been on the shelf with an upper body injury and will hopefully be ready for game action.

In November the Tigers went on 2 lengthy road trips, a 10 day trip to BC and Prince George and then a 5 day trip to Saskatchewan, where the Tabbies played 4 games in 5 days. The most notable part of November was the 10 game winning streak, which vaulted the Tigers to a large lead in the Central Division and had the Tabbies ranked in the CHL Top 10 for 4 consecutive weeks.

Medicine Hat scored 67 times while allowing 32 goals. The Tigers power play was 15 for 54 in the month, running at a 27.7% mark. That percentage jumped the Tigers to the number 1 ranked man advantage in the entire WHL at that time.

Success in the Division & Conference

Among the reasons for the Tigers strong start this season has been their play against teams in the Eastern Conference.

In 14 games this season against the Central Division the Tigers are 11-3-0-0. The Tigers have won 2 straight against divisional opponents and will kick off the second half of the year with 3 straight games of divisional match-ups.  Last season through 36 games they had a record of 8-8-2-1 against division rivals and finished the season with a 18-11-2-1 mark.

Where the Tigers have struggled is against the tough Western Conference. Overall this season the Tigers are 4-6-1-0 versus the US Division and BC Division this year.

25 victories before Christmas is the highest since the 2006-07 season, which was the Tigers Championship winning year (28 wins before the break).

Prior to that season the year with 25 or more wins before the break is unknown, as online records go as far as 1996.

33- The number of games played needed for Chad Butcher to reach 300 for his WHL career, which means he could only miss 3 more games this season. If he reaches the milestone he will become just the 9th player in franchise history to do so.

9- The number of double digits goal scorers on the Tigers, the most in the WHL led by Max Gerlach’s 23 markers. Also the number of games James Hamblin has left to play until he reaches 100 in his WHL career

1- The number of players who still need to record a point this season, that’s backup rookie goaltender Duncan McGovern.

85- Penalty minutes amassed by Tigers forward Zach Fischer through 30 games this season, currently leading the WHL in that category

23– The number of wins Nick Schneider has on the season, which is a new career high. Schneider leads the WHL in wins and minutes played by a goaltender.

18- Exactly half of the games remaining are against Central Division opponents in the second half of the season, with 5 left against the Western Conference