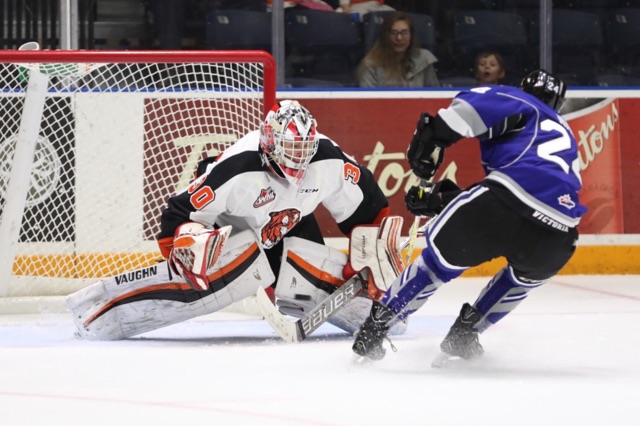 Medicine Hat, AB — On a day where the Medicine Hat Tigers announced they will retire the jersey of the great Tom Lysiak, the Tigers played a solid team game, got some puck luck and took home a 3-1 victory over the visiting Victoria Royals. Michael Bullion was between the pipes for the Tigers earning himself a second consecutive start after a shut out against Lethbridge the game prior. Cameron MacPhee was called up from Grande Prairie of the AJHL to fill Jordan Henderson’s spot who fell ill Tuesday and was unable to play. It was a great team effort on route to their 5th straight victory.

The opening period was a flashback to the 2005 NHL season. The trap. Both the Tigers and Royals played their neutral zone trap to a tee, not allowing much to happen and slowing the game down completely. Majority of the Tigers opportunities on Royals goaltender Griffen Outhouse were off the rush and some simple shots but nonetheless the Tigers fired 12 times, to only Victoria’s 2 shot on Bullion. It was a scoreless game through the opening 20 minutes.

It was a bit of the same for the start of the second period, this time however the Royals made Bullion busier creating chances using their speedy wingers Jack Walker and Matthew Phillips, who was in search of goal number 40 on the season. Bullion stood up to the challenge as the puck would be bouncing on Canalta Centre ice for both teams, as the clubs had trouble corralling pucks and taking clean passes. Then, just before the 7 minute mark in the period, a good shift from the 4th line unit of Ryan Jevne, Ryan Chyzowski and Gary Haden led to a loose puck being chipped by Jevne to Haden and to the back of the net for the Airdrie native’s 6th of the season, opening the scoring. The buzzer would sound on a solid period as Bullion had 5 periods of shut out hockey to his credit.

Tyler Preziuso got promoted to one of the Tigers top lines alongside Matt Bradley and Mason Shaw. With Prezuiso’s lightning like speed he created lots of offensive opportunities for his line mates. Prezuiso would take a pass from goaltender Bullion and streaked down the wing before feeding a pass in front of the net. The puck clanked off the skate of Bradley and into the back of the net, a clean goal by today’s day and age, his 27th of the season and a 2-0 lead. A breakdown in coverage had the Tigers scrambling with the speedy Walker and Phillips on a 2 on 1 for Victoria. Walker eyed up at the circle, made a stickhandling move and dished a nice pass over to Phillips who had the wide open cage for his 40th of the year and a 2-1 hockey game. For Bullion his shut out streak was snapped at 111:50. The Royals tried an all out blitz to tie the game but a good defensive play from Zach Fischer led to Steven Owre sliding the puck into the empty net and a 3-1 victory.

Medicine Hat is back in action on the weekend opening a two game set in Swift Current before heading back home to face the struggling Edmonton Oil Kings Saturday night at the Canalta Centre.