ALL ROUND EFFORT COMES UP SHORT IN SWIFT CURRENT 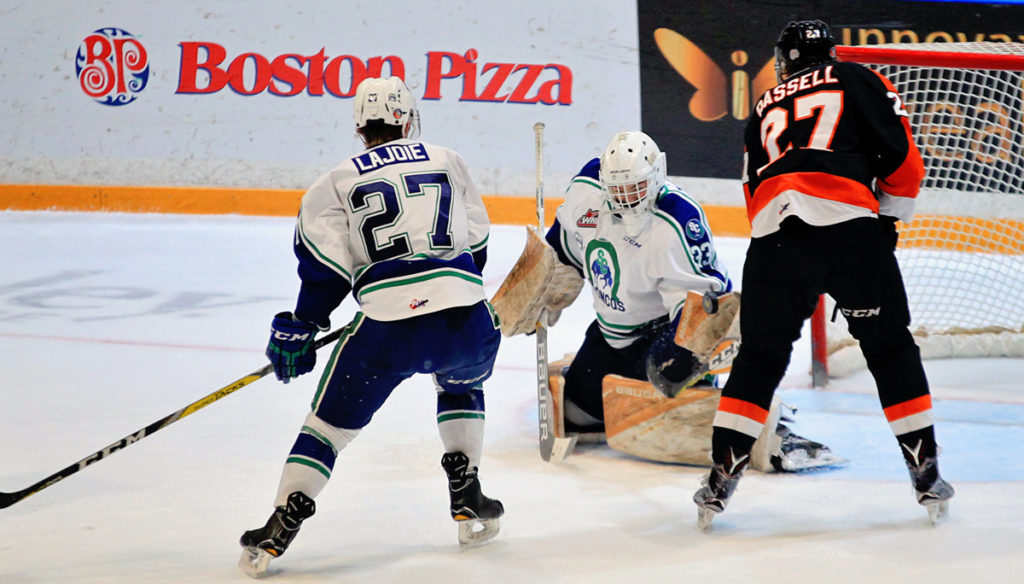 Swift Current, SK — It was a trying Friday night for the Medicine Hat Tigers. With the diagnosis of mumps in the locker room restricting John Dahlstrom and Jordan Henderson from action on top of already injured David Quenneville and Ty Schultz had the odds against them. However the boys would come out with lots of energy as the atmosphere from both teams as fierce, however the early edge would go to the Broncos before a late surge by the Tigers was foiled in a 3-1 loss.

Both clubs came out flying in the first period trading scoring chances. Jordan Papirny looked to be solid in net for Swift after his last start against the Tigers where he was pulled after 3 goals on 7 shots. At the other end was red hot Michael Bullion looking to increase his personal win total to 11 as a Tiger. But it was the Broncos that drew first blood as Finnish Import Aleksi Heponiemi scored his 22nd of the season to give the Broncos a 1-0 lead. Ryley Lindgren skated hard into the Tigers zone and made a smooth drop pass to set up Heponiemi for the goal. Heponiemi netted his 23rd and second of the night on a power play chance less than three minutes later to put the Broncos up 2-0. Teammate Tyler Steenbergen completed a cross-ice pass to Heponiemi who one-timed a knuckler by Bullion. It was a tough start the Tigers didn’t want to see but knew there was lots of hockey to be played.

In the second period the Tigers got good performances from Tyler Preziuso and call-up Josh Williams who made most of their new ice time and roles Friday night. The duo would sometimes be on the same line as Head Coach Shaun Clouston looked to juggle the lines, seeing what made the most chemistry. However the Broncos pressure would net them their 3rd goal of the evening as Riley Stotts snapped home his seventh marker of the season after Artyom Minulin`s point shot deflected off Bullion right onto the stick of Stotts. The goal would give the home side a 3-0 lead. The Tigers got a late power play and forward Mark Rassell disrupted the Broncos momentum by scoring his 27th of the season sliding a rebound past Papirny cutting the lead to 2 heading into the final frame.

The final 20 minutes saw the Tigers generate scoring chances and pushing to get back in this contest but Papirny was dialed in as he stopped all 13 shots he faced. Matt Bradley would be on the wrong end of the post as Papirny’s skinny red friends came into play. Bradley caught the Broncos goaltender going down too early and rifled a wrister past the shoulder, but the puck clanged off the cross bar and out of play. Earlier in the game Clayton Kirichenko also hit the cross bar in what could of been a closer game. Medicine Hat would push hard with Bullion pulled for the extra attacker but couldn’t get anything past the Broncos netminder, closing out a 3-1 loss and snapping the Tigers 5 game winning streak.

Medicine Hat will have no time to dwell on the loss and are right back at it on Saturday night, welcoming the Edmonton Oil Kings to the Canalta Centre for a 7:30pm puck drop.