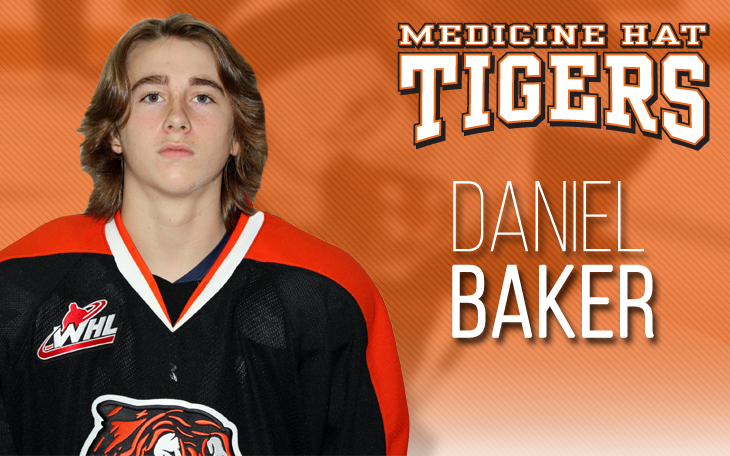 Medicine Hat, AB — The Medicine Hat Tigers wrapped up their 2016 Orientation Camp on Sunday afternoon but not without a new addition to the club in 15 year old defenceman Daniel Baker. Baker signed a WHL Standard Player Agreement following the morning scrimmage.

Baker was drafted earlier in the month by the Tigers in the 2nd Round, 28th overall. Baker has a 6’3 frame and has had praise by the Tigers coaching staff to be similar to long time Tiger Ty Stanton.

Tigers Senior Director of Player Development speaks highly of Baker’s game and progresses him to flourish in the WHL,

“Daniel is a good two way defender that we believe will prove to be dominant in the Western Hockey League. We look forward to his progress as a player over the next couple years,” said Kruger.

“I am very excited to be apart of the Tigers organization, it is a great city (bigger than I thought) but somewhere that I would like to start my WHL career,” said Baker moments after signing his contract.

Head Coach Shaun Clouston had some tough decisions leading into the Orientation Camp, with lots of skilled players attending, but Baker was one of the front runners and proved his worth and draft status,

“Daniel has committed to becoming a Medicine Hat Tiger. We look ahead to Daniel being a key member of our team and welcome Daniel and his family to the Tigers organization,” stated Clouston.

Baker will be eligible for his first season as a Tiger during the 2017-18 calendar year.

For a full recap on the Orientation Camp, check tigershockey.com starting tomorrow for all your updates and information stemming from the weekend festivities.