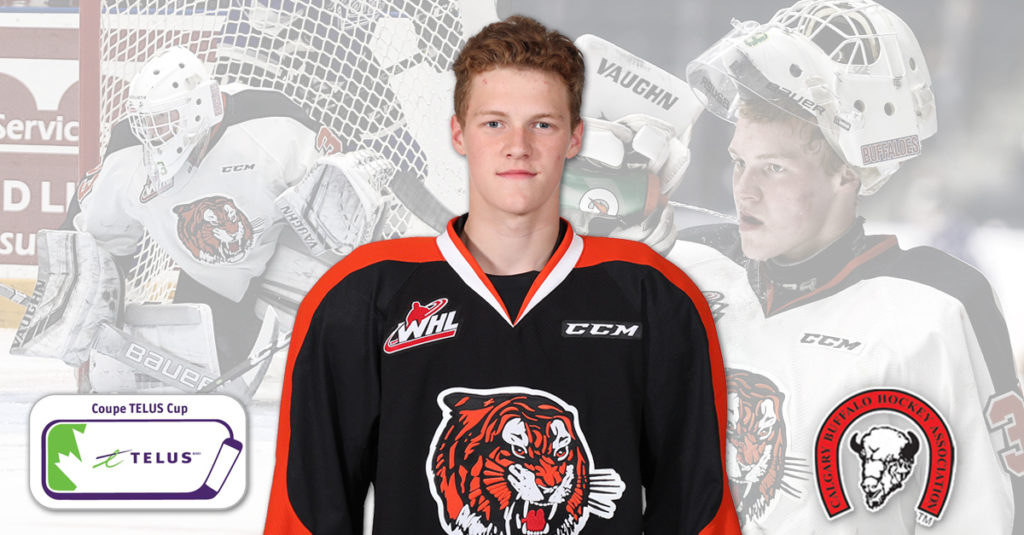 The Buffaloes finished the round robin play of the Telus Cup with three wins and two losses before falling to the Toronto Young Nationals 4-2 in the semifinal game on Saturday, April 27th.

“At the Telus Cup, you could see how talented teams all across Canada are and how bad we wanted to win after we lost the semi final game against Toronto,” said Bjorklund. “You could really see the passion and love for the game in our players’ eyes. It was sad to see us not making the championship game after we worked so hard all year.”

Calgary then fell 3-2 to the Tisdale Trojans in the Bronze medal game on Sunday. Bjorklund played five of his team’s seven games throughout the tournament and he posted 3.02 goals against average (GAA) and 0.900 save percentage (SAV%).

To earn their spot in the Telus Cup, the Buffaloes first needed to win the Alberta AAA Midget Hockey Championship.

“I think we had a lot of team success along the way before playoffs started, we really came close as a group and that definitely helped out. Playoffs can be a grind but you have to care of your body by eating well and stretching to prevent injuries in such an important part of the year, as well as having fun with it,” said Bjorklund.

Bjorklund suited up for all 11 of the Buffaloes’ post season games on route to defeating the St. Albert Raiders, the Mac’s Midget AAA World Invitational Tournament Champions, to capture the Provincial Crown. He posted a 1.76 GAA and 0.934 SAV% during the post season.

After the Alberta Championship, the Buffaloes then set their sights on defeating the BC Champions, the Cariboo Cougars from Prince George, in the Pacific Regional Finals.

“When we played Prince George in the Pacific Final they had a strong group of young men on that team with a lot of speed and skill,” said Bjorklund. “A goal of ours at the start of the year was to make the Telus Cup and we weren’t going to let that slip out of our hands when we were so close.”

The Buffaloes defeated the Cougars in two games during their best of three series to earn their spot as the Pacific Champions in this year’s Telus Cup.

“Playing my first two WHL games was really exciting and getting my first two wins made it that much better. All the boys welcomed me with open arms which always makes my time there unforgettable,” said Bjorklund of his opportunity with the Tigers.

In a season full of accomplishments including earning his first WHL win, winning the provincial and regional championships, Bjorklund also represented Canada in the World U17 Hockey Challenge, playing for Canada Black. He played two games in the tournament and posted a 2-0-0-0 record with 2.42 GAA and 0.919 SAV%. Canada Black finished the tournament in fifth place after defeating Canada White 5-3.

“Something I will take away from this season would have to play with confidence as well as having a good attitude in all situations to bring the boys up in the room,” said Bjorklund.

After taking a little bit of time off from hockey, Bjorklund will begin training and preparing for next season. He will be focusing on staying big while working on his puck handling skills with Tigers goaltending consultant, JF Martel.