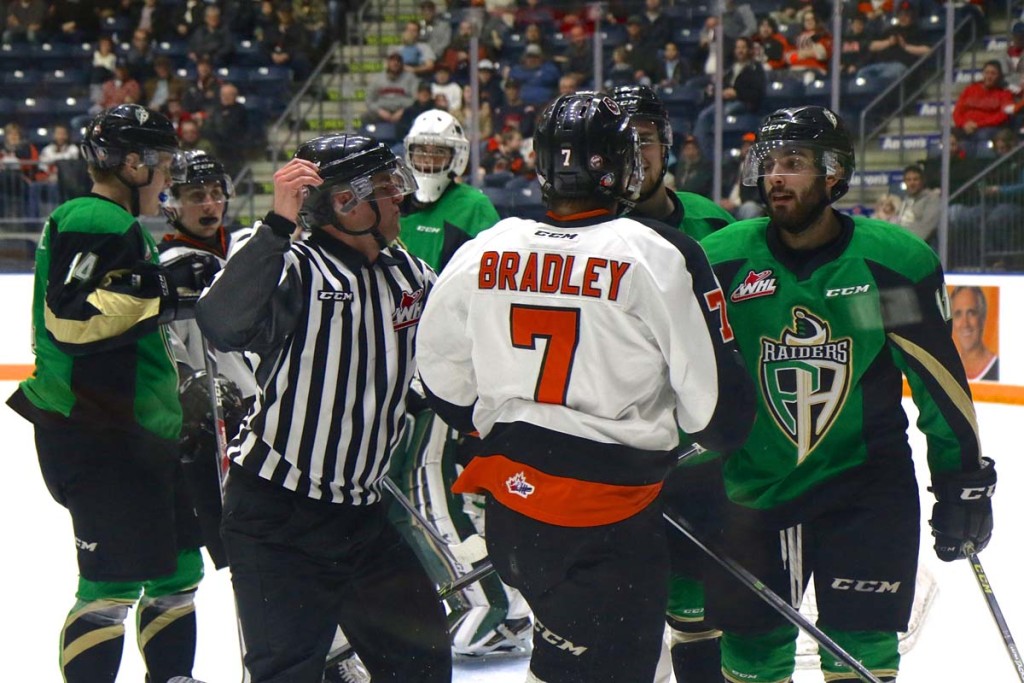 The 19-year-old MedicineHat Tigers forward was sidelined during camp with the Montreal Canadiens in July, and while he’s yet to return to contact, he’s already set his sights on the Chynoweth Cup this season.

“From talking to the guys already I know our goal is to win this league. I think this is the group to do it with and I’m really excited to get things going next week,” said Bradley, who is in Calgary for a leadership weekend with several Tigers veterans. “I think the way we finished the year was a little disappointing. But there were positives. We went 12-2 in the last 14 games or something, and we’re just going to take those positives and try to start the way we finished.”

The 131st overall pick in the 2015 NHL entry draft went down just minutes into his first game at the July Habs camp. But he hasn’t let the hurdle block his path.

“That was a big step back in July. I couldn’t really do much upper body for a couple weeks,” said Bradley, who scored 23 goals and added 28 assists for the Tigers last season. “It’s getting stronger now and I’m going to work with Joe (Frazer, Tigers assistant coach) at the start of the season to kind of catch up on all that I’ve missed.”

While the injury came during his first game at the July camp, Bradley says he still managed to soak in a lot from the veterans in attendance.

“They’re all really good guys. You kind of look up to them, but when you’re skating beside them and you’re not too far off from their level you can kind of look at that and it makes you want it so much more,” said Bradley, adding he’s feeling a lot more comfortable in his second year inside the Canadiens system. “I definitely felt a lot more comfortable going there.”

“Unfortunately that shoulder thing happened in the first period of the first game so I didn’t get much ice time to show them what I’m made of. Other than that it was a really cool experience and I’m looking forward to a good training camp.”

Bradley, who was told by Frazer that he’s stronger than he knows last season, still managed to stay on top of his lower body conditioning while rehabbing his shoulder, and says he’ll be entering this season stronger than the last.

“I’m a lot stronger. I’ve filled out a lot and gained a lot of muscle and I’m a lot more confident with myself and my game.”

Bradley — who is joined by Clayton Kirichenko, Steven Owre, Chad Butcher, Nick Schneider, Ty Schultz, Mason Shaw and Dave Quenneville at the leadership weekend — says the early discussions are all positive, and they can’t wait to see what the system’s rising talent has to offer with only a few open spots on Medicine Hat’s roster.

“I know we’re all really excited. Even this weekend, we’ve just been trying to put our goals together,” he said. “Everyone had a really good off-season and we’re coming to the camp here focused. I think right off the bat everyone is going to be dialed in. It should be a good, high-tempo, competitive camp.”

Training camp opens Friday at the Canalta Centre, with fans welcomed to come out and watch the action. A full schedule can be found at http://www.tigershockey.com.