CANADA COMES UP SHORT OF PODIUM 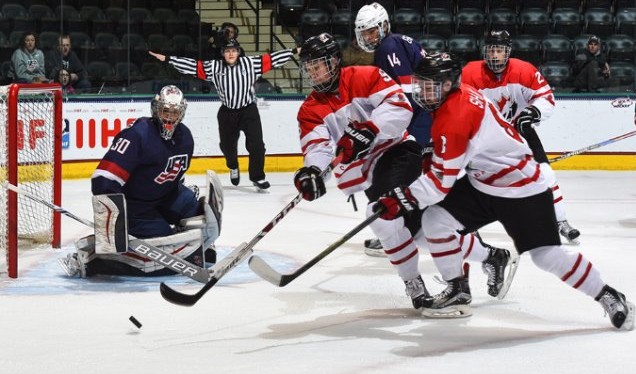 CANADA FALLS TO U.S., FINISHES FOURTH AT U18 WORLDS

GRAND FORKS, N.D. – Connor Hall (Cambridge, Ont./Kitchener, OHL) led the offence with a goal and an assist, but Canada’s National Men’s Under-18 Team settled for fourth place at the 2016 IIHF U18 World Championship after a 10-3 loss to the United States in the bronze medal game Sunday.

Canada found itself in an early hole after Joey Anderson and Logan Brown scored to give the Americans a 2-0 lead with barely five minutes gone.

Bitten got the Canadians back within one at 6:31, finishing a pretty pass from Shaw, but Kieffer Bellows struck right back for the Americans less than a minute later, restoring the two-goal advantage and chasing Stuart Skinner (Edmonton, Alta./Lethbridge, WHL) from the Canadian goal.

Evan Fitzpatrick (Lower Sackville, N.S./Sherbrooke, QMJHL) replaced Skinner but fared no better, allowing goals to Brown, Anderson and Nick Pastujov in a span of 5:38 as the Canadians went to the dressing room down 6-1 after 20 minutes.

Canada was certainly not short on chances, firing 25 shots on American goaltender Jake Oettinger through two periods, but couldn’t beat him in the second period, and a Kailer Yamamoto goal early in the middle frame made it a 7-1 game in favour of the U.S. through two.

Two more goals in the first 5:05 of the third period pushed it to a 9-1 American lead before the Canadians finally got another puck past Oettinger.

Hall got his first of the tournament at 7:05, following his own rebound and knocking it past the U.S. netminder, and Tippett made it 9-3 just over four minutes, finding space through the five-hole.

William Lockwood capped the scoring with 61 seconds for the U.S.

Despite the score, the Americans held a narrow 33-32 advantage in shots on goal.

Canada will look to get back on the podium at the 2017 IIHF U18 World Championship, scheduled for April 13-23, 2017 in Poprad and Sipsska Nova Ves, Slovakia.