CANADA HEADS TO SEMI-FINALS WITH 9-1 VICTORY 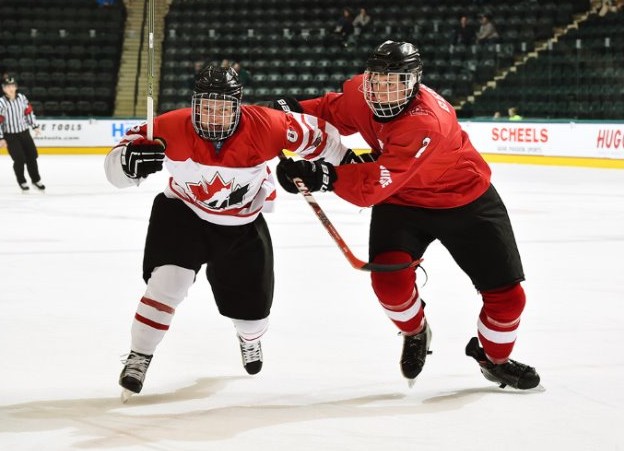 The Canadians will face the winner of the quarter-final between Sweden and Slovakia in Saturday’s semifinals (time to be confirmed).

The five points for Jost brought him to 14 for the tournament (six goals, eight assists), tying him with Connor McDavid (8-6—14 in 2013) for the most by a Canadian at a single U18 world championship.

Jost struck shorthanded to open the scoring, speeding away from the Swiss defence and going five-hole on a breakaway to put Canada up 1-0 just past the five-minute mark.

Quenneville doubled the lead almost seven minutes later on a Canadian power play, finishing off a tic-tac-toe set-up and providing the eventual game-winner.

Both teams picked up the offence in the second period, combining for 29 shots on goal, but Canada started to pull away on the scoreboard, starting with Jost’s power-play goal at 3:36.

Morrison got his first of the tournament midway through the middle frame, burying a feed from Howden, and McLeod played give-and-go with Jordan Kyrou (Toronto, Ont./Sarnia, OHL) before flicking a backhand past Swiss goaltender Philip Wuthrich at 16:19 for a 4-0 lead.

Switzerland finally got to Canadian netminder Evan Fitzpatrick (Lower Sackville, N.S./Sherbrooke, QMJHL) late in the period; Janik Loosli poked in a loose puck on a Swiss power play at 18:37, cutting their deficit to 4-1 after 40 minutes.

Canada went back to work on the power play in the third, scoring twice more with the man advantage; Howden knocked in a rebound at 2:01 after Dante Fabbro (Coquitlam, B.C./Penticton, BCHL) hit the post, and Jost finished his hat trick after a perfect saucer pass from Will Bitten (Ottawa, Ont,/Flint, OHL) at 10:07.

The Canadians scored on each of their first four power-play opportunities, and finished 4-for-5.

McLeod and Howden added goals in the final nine minutes to provide the final margin of victory.