CANADA TAKES TOP SPOT IN POOL B WITH 3-1 WIN 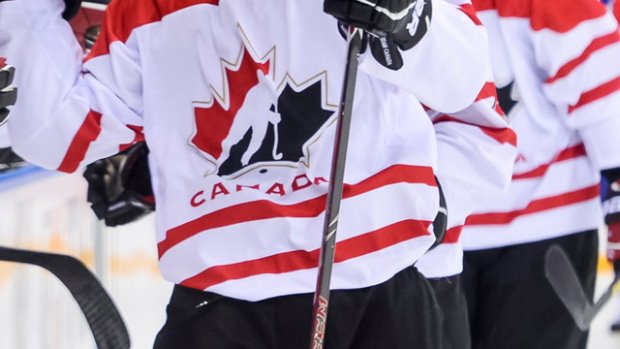 CANADA EDGES FINNS TO FINISH PERFECT PRELIMS AT U18 WORLDS

GRAND FORKS, N.D. – Evan Fitzpatrick (Lower Sackville, N.S./Sherbrooke, QMJHL) was terrific, making 26 saves and leading Canada’s National Men’s Under-18 Team past Finland 3-1 on Tuesday afternoon in the preliminary round finale for both at the 2016 IIHF U18 World Championship.

The win gives Canada first place in Group B with an unblemished 4-0 record in the round robin, and means the Canadians will face either Russia or Switzerland in Thursday’s quarter-finals (time to be confirmed).

Laberge opened the scoring on the power play just past the seven-minute mark of the opening frame, carrying the puck to the top of the face-off circle before going low to beat Finnish netminder Leevi Laakso.

Quenneville made it a 2-0 game just over five minutes after that, letting go a slap shot from the point that made its way through traffic and through Laakso.

Fitzpatrick took over from there, making his three best saves in the second period – one with the glove, one with the right pad, and one on a shorthanded breakaway – although he got some help from his friends; the Finns hit three posts through the first 40 minutes.

Finland held a 12-7 advantage in shots on goal in the third period, and finally got one behind Fitzpatrick when Eetu Tuulola redirected a point shot past the Canadian netminder with 5:16 to go.

But Jost iced the win in the final minute, outracing a Finnish defenceman before tapping the puck into an empty net with 36.6 seconds to go.

The Canadians continued their strong play at five-on-five; they allowed five goals in four games through the preliminary round, and only two of those came with the teams at even strength.