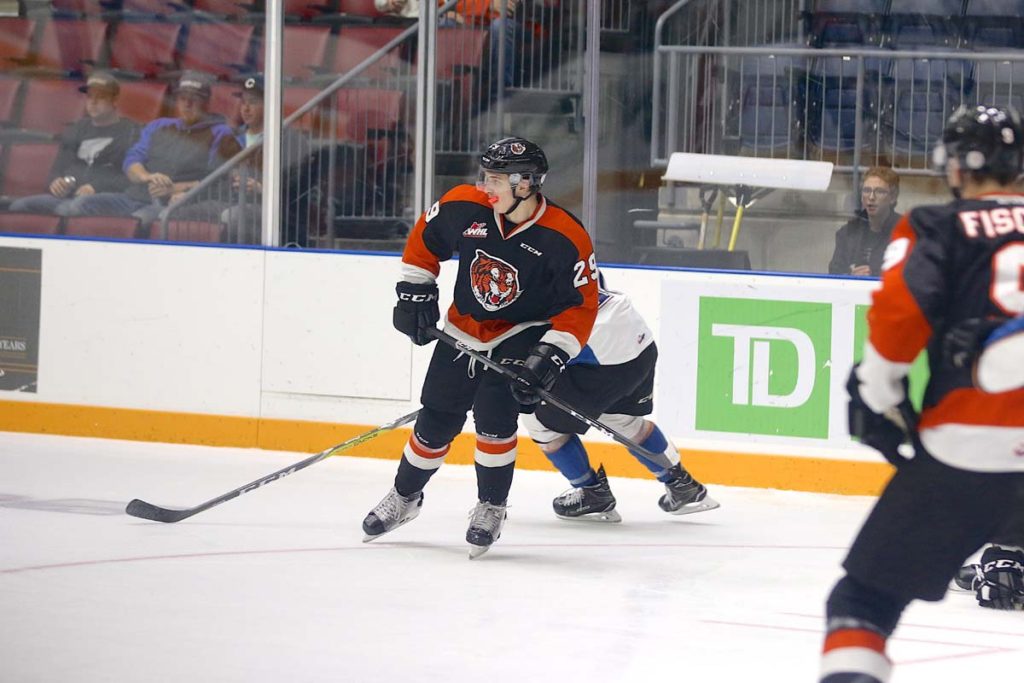 Medicine Hat, AB — The stage is the WHL Playoffs, the opponent, the Brandon Wheat Kings. However, back in August Ryan Chyzowski wasn’t sure if he would make the team as a 16 year old considering the depth and age of the Tigers returning players. Now fast forward 72 games and Chyzowski finds himself playing a regular shift at centre with Tiger veterans Ryan Jevne and Tyler Preziuso.

“This is pretty special,” said Chyzowski, “To be a part of this team and be with these guys is something that doesn’t happen very often. We have a special team and for it [make the playoffs] to happen in my first year in the league is awesome and I’m happy to be playing in the post season.”

A 2015 1st Round Bantam Draft Pick, Chyzowski has lots of ties to hockey including his big brother Nick, who is a WHL veteran of 271 games with the Kamloops Blazers. With big brother Nick, their numbers are similar. Ryan recorded 12 points in 52 games as a 16 year old while Nick picked up 11 points in 57 games in his first season with Kamloops. Ryan’s father Dave works for the Blazers in their business office and also had a luxurious career after being selected 2nd overall in the 1989 NHL Entry Draft. Dave played 126 games in the NHL and recently retired from hockey just 7 years ago.

Chyzowski knows that the pressure is on but wants to take it one season at a time. Playing the post season can help his game and become a potential star for the Tigers for another 4 seasons.

“It’s my first season in the league so every day has been a new learning experience this year. Heading to the playoffs extends the season and allows myself to learn even more about preparation and what it takes to be a championship team.”

Through the first round of the playoffs Chyzowski’s line has played well adding depth and energy to a Tigers lineup full of talent. Chyzowski, Ryan Jevne and Tyler Preziuso have saw time against the Wheat Kings top line in Dauphin with Brandon attempting to line match on the young Chyzowski. The trio haven’t faltered and have been a trustworthy line for Head Coach Shaun Clouston. Chyzowski knows however he plays an important role in the Tigers run to the Championship.

“There really isn’t any personal expectations for me this post season. I just want to play my game when I am on the ice and bring lots of energy to the dressing room and to my teammates,” stated Chyzowski. “The success of the team is important to me and if I can do anything to help that, it’s what I am going to do.”

Chyzowski hopes to follow in the footsteps of his teammates Steven Owre and Chad Butcher who both broke into the league as 16 year olds and are just finishing their WHL careers this season. Butcher played 300+ games in a Tiger uniform and Owre played 270+ games. Owre and Butcher have proved to be great mentors for Chyzowski this year, handing out pointers and preparation tactics to be successful in the league.

“They are the older guys on the team, they are definitely my role models. I have watched them all season on how they prepare and what they do to bring themselves success. Obviously throughout the year they give me pointers and help me as much as they can, but they are good leaders and it has been fun.”

Throughout the long 72 game regular season and into the post season, Chyzowski has learn lots about himself both as a person and as an athlete. Mental preparation, physical preparation, balancing school and hockey, pressure of competing every night are all every day occurrences for the 16 year old, but that hasn’t slowed him down and Chyzowski wants to make sure that follows him throughout his WHL career.

“I think the biggest thing I have learned this year about myself is how mentally strong I can be. Being positive when things are going bad is tough to do but it is required if you want to have success in the league and I think I overcame that this season.”

Chyzowski has some sound advice for future 16 year old rookies….

“Just take it all in,” Chyzowski says with a big smile, “It’s a big step from midget to junior but learn as much as you can and be positive in all situations and you will have success.”

Chyzowski and the Tigers wait their 2nd round playoff opponent after sweeping the Brandon Wheat Kings on Wednesday. Second Round action is slated to get underway sometime next week depending on scheduling.