DECKHUT EXCITED TO EXPERIENCE HOCKEY NORTH OF THE BORDER 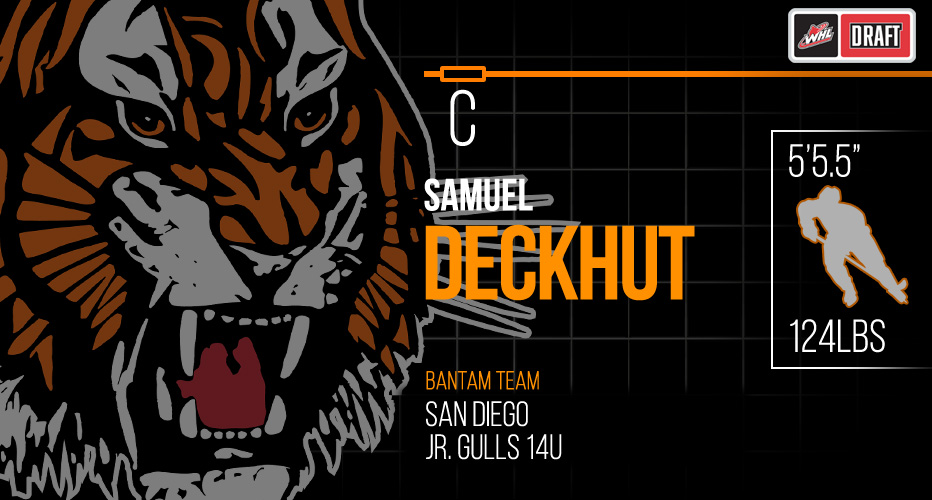 As a budding hockey player in sunny San Diego, Samuel Deckhut is a bit of an anomaly.

The 15-year-old San Diego Gulls bantam AAA forward is the only member of his junior high school class who even plays the game, but that hasn’t prevented Deckhut from forging a path to the WHL as a bantam draft pick of the Medicine Hat Tigers.

“Whenever I tell people I play hockey they’re like, ‘in San Diego? Really?’ … Being in an area with so much hockey would be pretty cool, so much different from here,” said Deckhut, who was selected by the Tigers in the 12th round at “I was at my house and we were about to go to San Jose for this one camp, but right before we left the house my dad yells at me, ‘You got drafted to the Tigers!’ It was pretty cool.”

While he lives in an area where hockey is more or less considered a fringe sport, Deckhut has been able to thrive thanks in part to a hockey-loving family. His mother, Charlotte, says Samuel found his passion on the ice at an early age and has been chasing the dream of playing at the highest level ever since.

“He hit the ground running with hockey. He was on skates at like two (years old) just because we were at the rink all the time anyway so we’d put him out there. He’s just got the personality for it,” said Charlotte. “He’s the youngest of three so he’s spent a lifetime trying to keep up with his older brothers and he’s always had that fighting sprit. He does not want to miss out and he will die trying.”

The 5-foot-6, 124-pound forward added he’s enjoyed being the youngest of three boys in his family. While it comes with some challenges, there’s always someone to play hockey with while everyone else his age is off playing a different sport.

“When we were younger, me and my dad against my brothers would play 2-on-2 in the driveway,” said Samuel. “It was a lot of fun playing with them, and they’re always teaching me how to play. It’s cool having older brothers to help you out.”

While Charlotte admits hockey is an afterthought for many young athletes in southern California, the Deckhuts have been able to immerse themselves in an impressively rich, albeit small, hockey community.

“I have three boys who play hockey so it’s such a huge part of our world here. All our best friends are hockey parents and we spend a lot of time doing hockey-related activities so it feels very full and fabulous but it’s obviously a tiny community,” said Charlotte. “It’s sort of a wacky sport, it’s like he’s an alien playing this crazy thing that no one understands.”

But Samuel clearly has a strong understanding of the game, something made evident in his 2016-17 season highlight reel posted on Youtube— a sample of the young lefty’s 19 goals and 30 assists in 39 games this season.

Despite being the only member in his school classroom with the ability to skate, Deckhut has established himself as a viable prospect at the bantam level through dedication, love for the game and a strong support system.

While he’s on one of just a few competitive bantam teams in his area, Samuel has been able to rub shoulders with a number of NHL players and alumni, and has even played under a few.

“On the bench there’s always at least one NHL dad coaching,” said Charlotte. “You just have access to hockey in a different way than I think you do in a place where everyone plays.”

Samuel added he regularly crosses paths with former NHLers Craig Johnson and Dave Karpa. And with any luck, he’ll end up living with Arizona Coyotes captain Shane Doan. Samuel is on the cusp of confirming a place on Doan’s son Josh’s midget Coyotes squad for next season, leaving him in a promising environment while he gears up to crack the Tigers roster.

“I would just be living with them and two other billets, which is pretty cool,” said Samuel. “It’s like a 90 per cent chance. We still have to get into the school and stuff, but if that all works out I’ll definitely go there.”