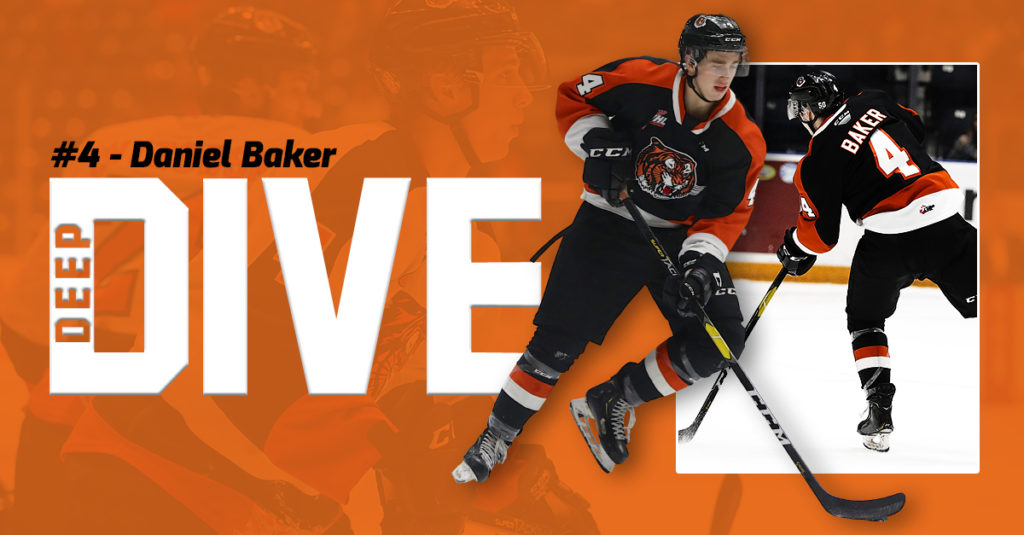 The 6’4, 183 pound Edmonton product started his hockey career at age five and his first memories of playing hockey were on the backyard rink. Baker grew up with his older brother, Josh, playing and competing against each other.

“My brother and I would spend hours playing road hockey, mini sticks and ice hockey. He always pushed me to be better,” said the 19-year-old.

From the backyard rink, Baker progressed through hockey playing for Whitemud West and the Canadian Athletic Club (CAC).

While playing for the CAC team during the 2015-16 season, Baker was named the Alberta Major Bantam Hockey League Top Defenceman. A prestigious award that a few Tigers have won including Jay Bouwmeester (1997-98), David Quenneville (2011-12), Dylan Plouffe (2013-14), and most recently Tigers prospect and local product Josh Van Mulligen (2019-20).

After the conclusion of the 2015-16 season where he collected 41 points (20G, 21A) in 32 games played with the CAC, Baker was drafted in the second round, 28th overall by the Medicine Hat Tigers.

“I remember seeing my name on the computer and being excited to be drafted by such a storied franchise,” said Baker of the Western Hockey League (WHL) bantam draft.

During his 15-year-old season, he began playing for the Northern Alberta X-treme Prep team in the Canadian Sport School Hockey League (CCSHL). He scored seven goals and collected 18 assists in 28 games played that season.

The following year, Baker continued to play for the X-treme and he also got his first taste of WHL hockey making his first appearance with the Orange and Black September 22nd, 2017, in Lethbridge.

Late in the season, the injury-plagued Tigers called Baker up to play during the month of February. He made eight appearances while collecting his first WHL point by assisting on Elijah Brown’s second period goal against the Calgary Hitmen February 9th, 2018. After that stretch of hockey with the Tabbies, Baker returned to the X-treme and helped them win the CSSHL Championship before rejoining the Tigers for their playoff run.

“Being able to win a championship that year was very special,” said Baker. “Adjusting to the size and the speed of the WHL had its challenges but I thought I was able to adjust my game to help the team [Tigers] when they needed me.”

During the 2018-19 season, Baker embarked on his rookie season with the Tabbies and immediately became a regular in the roster. He scored his first career WHL goal December 5th, 2018, against the Moose Jaw Warriors, which he says is his favourite hockey memory to date.

“When I was a rookie having two 20-year-old defencemen in Linus Nassen and Dylan MacPherson really helped. They were good leaders for the younger defencemen such as myself,” said Baker.

Returning for his sophomore season, Baker built on the success of his rookie campaign and became a leader for the younger players. Baker was relied on to play against some of the top forwards in the league which he believes has helped push him to be the best player he can be.

Although the Tabbies season was cut short due to the COVID-19 pandemic, Baker set new career highs in all offensive categories with 13 goals and 25 assists for 38 points in 62 games played. Medicine Hat finished the season in second place of the Central Division with a 41-19-2-1 record. Baker was recognized along with sophomore forward Corson Hopwo as the co-winners of the MacLean Wiedemann Lawyers LLP Most Improved Player Award.

“Since being drafted by the Tigers I have been lucky enough to have coaches and teammates who push me to get better. Playing alongside great players who want to win has helped me at both ends of the ice,” said Baker.

Currently, Baker is working out five to six days a week doing various strength training as well as off-ice shooting pucks and stick handling. He is focusing on improving his lower body strength and quickness to help his skating. Baker is looking forward to picking up where the Tigers left off next season.

“Not being able to finish this season was disappointing therefore I look forward to the opportunity to help win a championship next season,” said Baker. 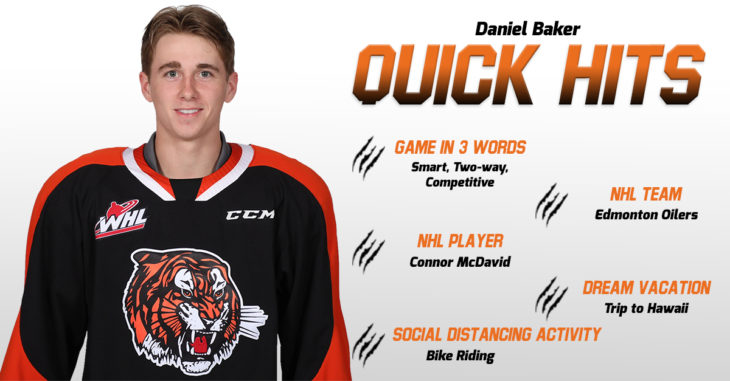 The next event for the Tigers will be the Canadian Hockey League (CHL) Import Draft that is scheduled to take place later this month.