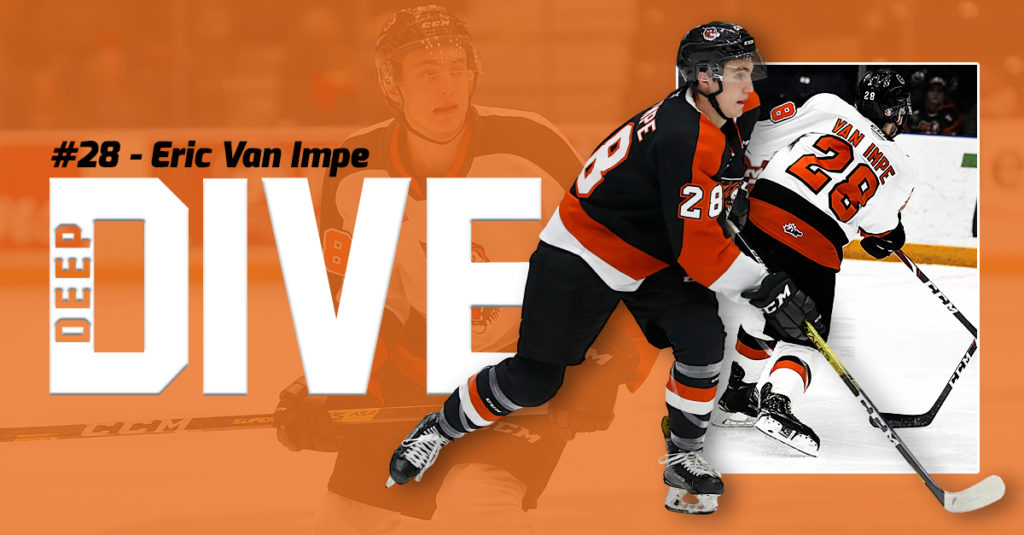 Medicine Hat, AB – A lot of people say they have grown up with the game of hockey and for Medicine Hat Tigers defenceman Eric Van Impe that was a reality.

Van Impe is the son of Darren and he is one of four current Tigers who has a father who played in the WHL and the NHL.

The 6’3, 185 pound defenceman was born in New York City while his father was playing for the New York Rangers during the 2001-2002 season. Van Impe has dual citizenship with the United States but some of his earliest memories are from when he lived in Germany while his father played In the Deutsche Eishockey Liga (DEL) from 2003-2008.

“I remember lots of it,” said Van Impe of living in Germany. “I actually used to speak German well for the age I was and I used to have to translate for my parents a bit. But yes I remember growing up there for a bit and going to all my dad’s games.” 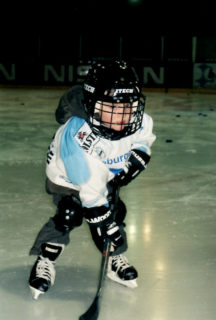 Van Impe got his first taste of hockey while living in Germany with his family. He first started skating at around the age of three and his first hockey memory was skating with his dad after a practice when Darren played for the Hamburg Freezers. Van Impe was six when he started his hockey career with a German team, but he only practiced because he was still too young to play.

The 19-year-old year is also the oldest of four children, his younger brother Ben is 17 and was born in Prince Albert, SK, while his younger sisters Sarah (15) and Meghan (13) were both born while the family lived in Germany. After their time in Germany, his family made their way to Calgary where Van Impe began playing in the Simon Valley Minor Hockey system. While playing for Simon Valley, he met his Tigers teammate Nick McCarry.

“Second year atom I played with him [McCarry] for the time so I would’ve been 10,” said Van Impe.

During his time in the Simon Valley Minor Hockey system, his father also coached him. Having a father who played professionally is something Van Impe believes has benefitted him.

“Growing up I always knew the guy trying to help me out had actually gone through it so it makes it a lot easier to trust what he’s saying,” said Van Impe of his father. “He has definitely played the biggest part in my hockey career to date.”

After his time with Simon Valley, Van Impe joined the Calgary Northstars Hockey Association and during his WHL bantam draft year, he played for the Calgary Northstars Sabres U15 AAA where he put up 43 points (15G, 28A) in 36 games. He also played for Team Calgary North in the Alberta Cup that season where his team lost in the B final to Team South. Van Impe collected three points (2G, 1A) in five games played. He was then drafted in the second round, 30th overall by the Spokane Chiefs.

The following season, he played for the Calgary Northstars U18 AAA team where he collected 15 points (5G, 10A) in 34 games while adding two assists in five playoff games. During his 16-year-old season, he suited up for the team same team and finished the year with 33 points (13G, 20A) in 34 games. It was during that season that Van Impe was traded to the Tigers from the Chiefs and he made his WHL debut with the Tabbies January 5th, 2018, against the Edmonton Oil Kings. The Tigers won 5-1 and Van Impe finished with a +1 rating.

The following season, Van Impe joined the Orange and Black for his rookie campaign in the WHL. He scored his first career WHL goal on September 26, 2018, against the Oil Kings. He finished the year with six points (2G, 4A). He also won the team’s ATB Financial Scholastic Player of the Year Award.

When asked about his most memorable hockey moment so far he said it was a tie between his WHL debut and his first goal.

“Just how cool it was to get those accomplishments,” said Van Impe of the experiences. “And how much more relaxed you feel once you get your first game over with.”

Returning for his sophomore season with the Orange and Black, Van Impe set new career highs in all offensive categories with four goals and 13 assists in 63 games played before the season ended due to the COVID-19 pandemic.

“On and off the ice it’s been a ton of fun. The teammates I’ve been with the last couple of years have made things very enjoyable. It’s a very competitive league and things aren’t just given to you,” said Van Impe of his Tigers career to date.

While he has enjoyed his teammates, there is one in particular that he has looked up to the past couple years, James Hamblin.

“Jimmy being the captain for the last two years was an easy guy to watch and learn from. Just seeing how he handed himself day to day,” said Van Impe.

While Hamblin moves onto to play professionally with the Bakersfield Condors of the AHL next season, Van Impe has set his sights on helping the Tigers win the league. To prepare for it he has been working out five days a week and skating anywhere from two to four times a week. His primary focus this summer is to increase his lower body strength. 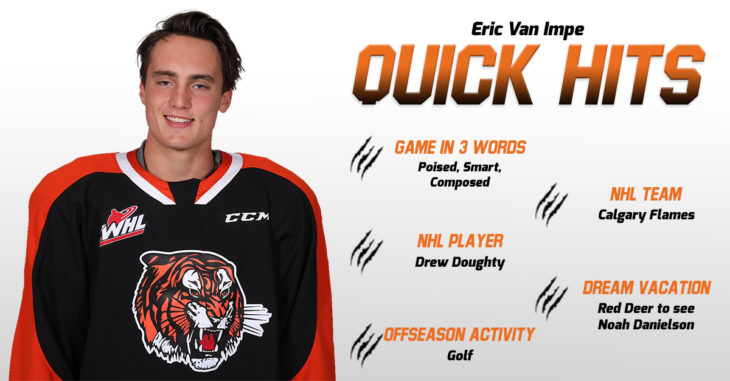 The WHL announced their return to play protocol for 2020-21 last month with a target start date of October 2nd.