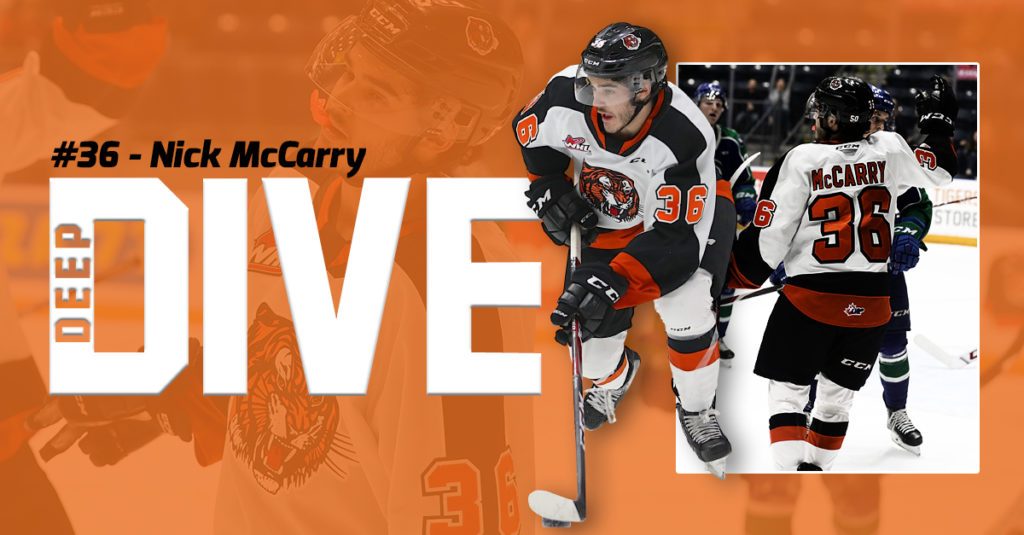 Although he was not drafted in the Western Hockey League’s (WHL) bantam draft, McCarry’s grit and work ethic helped him achieve his goal of playing in the WHL.

“I was never drafted or even looked at in bantam. I didn’t play bantam AAA either and I was a bit undersized but that never stopped me from working hard and doing what I needed to, to separate myself from bantam to midget,” said the 19-year-old Calgary native. “I wouldn’t take back the experience even one bit because it’s for sure a good one that really shows if you work hard anything is possible. It’s really helped me too in life in hard situations and overcoming obstacles.”

The 5’9 forward learned to skate at the age of two and he began his hockey career with the Simon Valley Minor Hockey Association at the age of three.

One advantage McCarry believes that has benefitted his hockey career is growing up with older brother Tyler.

“I used to skate with him and his buddies all the time which helped me skate with older guys and learning from them right away. He has always believed in me and supported me which has helped me make it to the next level and reach my goals,” said McCarry.

Tyler currently plays for the University of Providence in the American Collegiate Hockey Association (ACHA) II.

Another advantage that has helped McCarry chase his dream of playing in the WHL was that his father, Sean, owns the Hockey Development Centre (HDC) in Calgary. This has allowed McCarry the opportunity to skate and train at the centre whenever he wants as he constantly looks to improve his game. But along with the HDC, McCarry credits his father for helping him with hockey as well.

“My dad coached me my entire career when I was playing for Simon Valley. He has taught me a lot about to help me be the best player I can be and pushed me growing up to do my best,” said McCarry.

During his time with the Simon Valley Minor Hockey Association, McCarry began playing alongside future Tabbies teammate and best friend, Eric Van Impe, when they were around 10 years old.

“Yeah, it’s really crazy to think that we grew up playing together and it’s truly a dream come true,” said McCarry of being able to play in the WHL alongside Van Impe. “Playing on the same team and living together for sure makes everything more comfortable moving away from home. It means a lot especially when you get to go on this journey with one of your best friends.”

McCarry signed his WHL standard agreement with the Tigers during the 2017 training camp and made two appearances in Orange and Black during the 2017-18 campaign. He played that season with the Calgary Northstars U18AAA team alongside Van Impe. The Northstars finished that season with a 23-9-3 record, finishing fourth in their division before falling to the Calgary Flames in the division quarter finals matchups. McCarry put up 35 points (15G, 20A) in 34 regular season games and added one goal in four games during the playoffs.

During the 2018-19 season, McCarry began the year with the Fort McMurray Oil Barons of the Alberta Junior Hockey League (AJHL) before being called up to join the Tigers for the remainder of the season. With the Oil Barons, McCarry had 14 points (7G, 7A) in 30 games.

“It was a good experience to go there [Fort McMurray] and gain some confidence in junior hockey and to bring it to the next level. I met a lot of unbelievable guys on the Oil Barons too and I’m thankful for them giving me an opportunity. There are fewer mistakes in the WHL and you always have to be pretty much perfect and in the right spot at all times,” said McCarry.

With the Tabbies, McCarry put up six points (3G, 3A) in 24 regular season games helping the team finish with a 35-27-4-2 record. The Orange and Black fell to the Edmonton Oil Kings in six games during the first round of the 2019 playoffs.

Returning for his first full season in Orange and Black this past season, McCarry set new career highs in all offensive categories with 23 points (13G, 10A) in 58 games.

“I owe my success this season to my teammates for making me better every day and my coaches obviously for giving me the opportunity to move up in the lineup and pushing me to be better on and off the ice as well as to keep believing in myself that I can be an offensive guy on the team,” said McCarry.

Since the Tigers’ 50th anniversary ended early due to the COVID 19 pandemic, McCarry has been taking advance of the HDC. He has been working out five times a week and skating twice a week while focusing on improving his shot, becoming a faster skater and getting stronger.

When asked what advice he would give any undrafted player dreaming of making it to the WHL McCarry said, “Don’t stop working hard and it’s never over. If you want it, then go for it. You just have to believe in yourself and trust the process.” 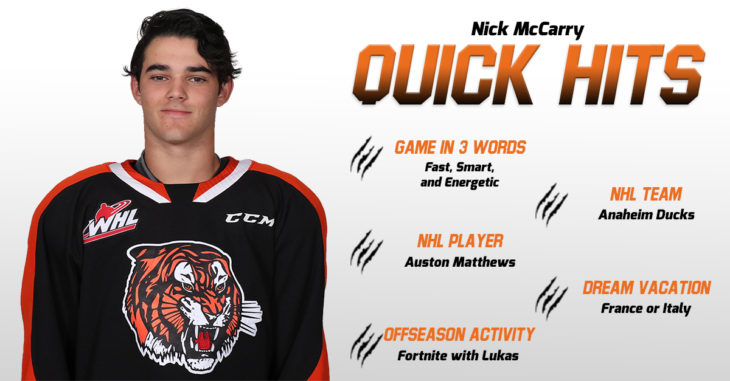