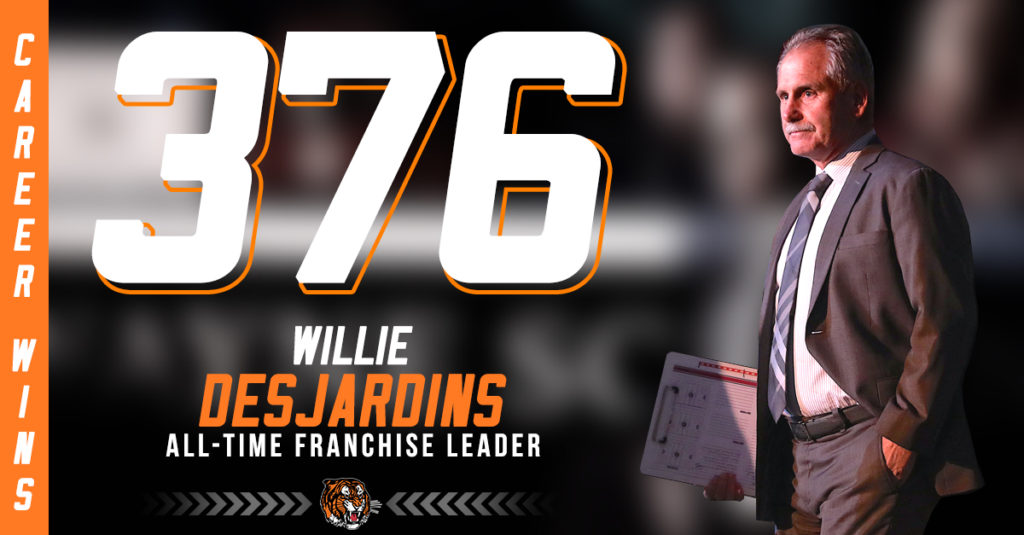 Desjardins, who hails from Climax, Saskatchewan began his coaching career at the University of Calgary in 1985 as an assistant and eventually became head coach of the club in 1989. Next, it was off to Japan to coach to coach the Seibu Bears. Upon returning to Canada, Desjardins had stints with the Saskatoon Blades and as an assistant coach for the Canadian Men’s National Team.

In 2002 Willie was hired by the Medicine Hat Tigers and was instrumental in the Tigers’ first playoff appearance in five years. The following season the Orange and Black claimed their 4th Western Hockey League Championship and a berth in the Memorial Cup. For the 2nd time that decade and for the 5th time in franchise history the Tigers would again climb to the top of the mountain, winning 52 games, capturing the Western Hockey League crown and making it to the Memorial Cup Final.

The Tigers success under Desjardins would continue throughout the decade, winning 40 games in six of his eight seasons, capturing four consecutive Central Division banners (’04, ‘05’, 06’, and ’07) and two Eastern Conference Championships (’04 and ’07) while Willie was at the helm.

Desjardins would then take his talents to the pro ranks and to the Lone Star state where he started as an Associate Coach for the Dallas Stars, then as Head Coach he guided the Texas Stars to a Calder Cup Championship in the 2013-14 Season. Following that Desjardins was hired to coach the Vancouver Canucks, then he was hired as the interim coach of the Los Angeles Kings in the 2018-19 season.

While not originally from Medicine Hat, Desjardins and his family have called Medicine Hat home throughout most of the 21st century. On May 31, 2019 there was a homecoming as Willie Desjardins was once again introduced as the Tigers General Manager and Head Coach.

Desjardins says, “It’s been an honour to be part of such a great organization. I’d like to thank Darrell and Brent Maser for their support. I’ve been fortunate to be surrounded by some great people over the years, and because of that we’ve had some success. The players win the games. Without their hard work and determination, we wouldn’t be here.”

There will be little time to celebrate the milestone as Desjardins looks for career win 377 this coming weekend.

Goals For Mental Health raises $19,455 as WHL players score in support of CMHA
11 hours ago