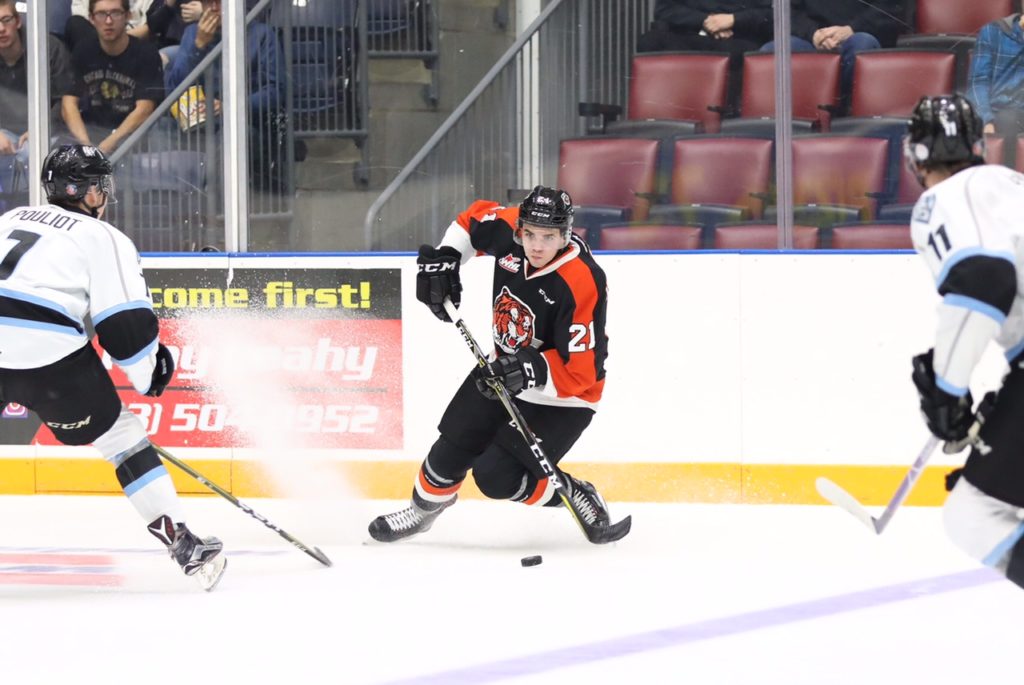 Dawson Heathcote must have had a horseshoe in his hockey pants on Friday night at the Canalta Centre.

The 17-year-old rookie forward capitalized on a pair of fortuitous bounces then worked his way onto the highlight reel with an impressive individual effort to complete his first career hat trick — with his fourth career goal no less — and lead the Tigers to an 11-1 landslide over the Kootenay Ice.

Ryan Jevne set the tone early for Medicine Hat. The 19-year-old power forward finished off a rebound in front of Kootenay Ice netminder Bailey Brkin just 22 seconds into the game to set the framework for a wild 60 minutes.

The 1-0 lead stood for the majority of the opening frame until Heathcote put his milestone night in motion. The Nanaimo product deflected a loose puck behind the net with his skate and caused it into the goal— opening the floodgates for the blowout to come.

The Ice put themselves in penalty trouble immediately after the marker and David Quenneville made them pay for the mistake. The 19-year-old blueliner blasted a one-timer past Brkin for one of his three points on the evening — bringing him to 17 on the year with at least one in every game.

The Tabbies picked up right where they left off in the second period. Heathcote kept the offensive onslaught rolling on another chance occurrence early in the frame — redirecting an odd bounce off the end-boards into an open cage — then Jevne broke in all alone and drew a penalty shot just over a minute later.

Jevne made no mistake on the opportunity, forcing Brkin to react with a deke then sending a backhand shot into the roof of the goal for his second of the night and third of the year. Jevne finished the night with five points.

It was only the start of Medicine Hat’s most dominant period of the season. Heathcote kept the burning pace alive just a few minutes later, firing a puck past Brkin from the high slot to end the netminder’s night early and send several hats flying onto the ice.

Ryan Chyzowski joined the scoring parade later with his third of the year later in the frame, then Dylan MacPherson found his own moment a few minutes later. The 19-year-old Redcliff product put one through the wickets of Ice backup Kurtis Chapman for the first goal of his WHL career, in his 66th game with the Tigers.

Gary Haden drove a ninth puck into the Kootenay cage less than a minute laer to bring Medicine Hat within one shot of double digits and cap off a six-goal second period.

The Ice finally put a stop to the bleeding early in the third. Colton Kroeker cut in on a breakaway and beat Tigers goaltender Jordan Hollett over the glove for his fourth of the year, but it merely put a dent in Medicine Hat’s daunting lead.

Tigers captain Mark Rassell completed the quest for 10 midway through the third, finishing off a feed from Josh Williams for his own 10th of the season. Chyzowski struck again a few minutes later extend Medicine Hat’s lead to double digits.

Tigers goaltender Jordan Hollett stopped 23 shots to lock up his third victory of the season and push the Tigers to 6-3-0-0. Brkin was pulled after allowing six goals on 23 shots. Chapman stopped 26 in relief, but couldn’t stop the Ice from falling to 4-6-1-0.

The Tigers hit the road to Lethbridge Sunday to take on the Hurricanes at 6 p.m.