FISCHER EXCITED TO BE PART OF THE NHL 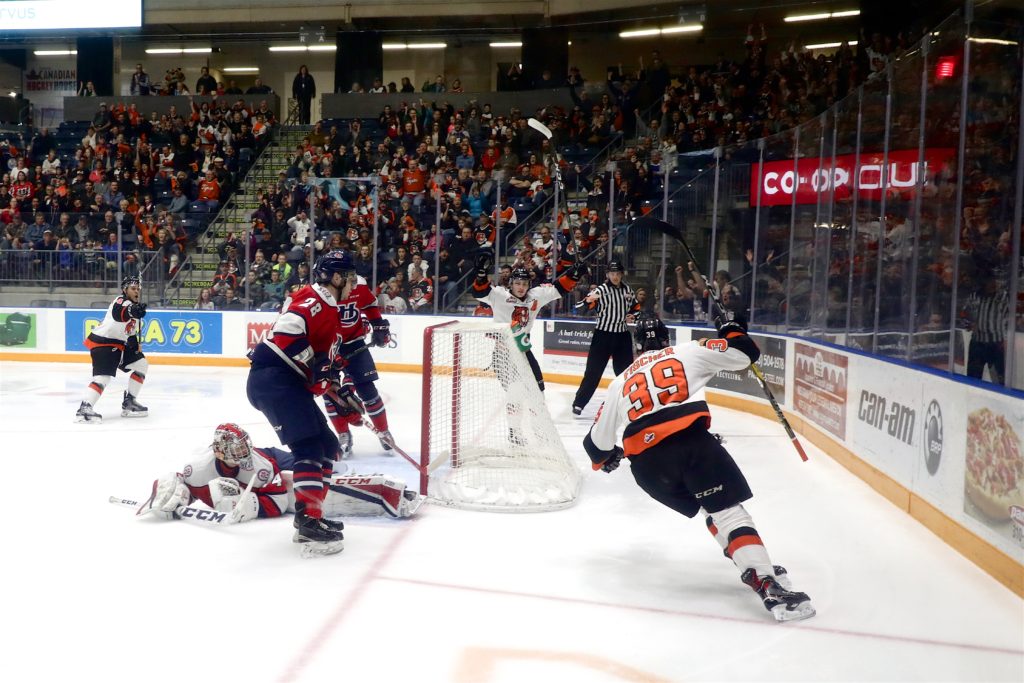 Medicine Hat, AB — Zach Fischer had a can’t miss 2016-17 season. But the more incredible story for the Lloydminster, Alberta native is the route taken to get the Western Hockey League in the first place. Undrafted to the WHL during his bantam season despite putting up more than a point per game, Fischer never lost sight of his goals, and in 2013 was listed by the Tigers.

Spending two years playing midget hockey in Lloydminster and once again putting up point per game totals Fischer made the jump to the WHL in 2014-15. As a rookie Zach put up 10 points in 54 games. The following season Fischer endured multiple injuries, including a broken ankle which led the scrappy winger to miss most of the season. Instead of hanging his head because of the injury, Fischer persevered and made his return for the push to the post season in 2015-16.

Finally healthy, the last half of the season was just the tip of the iceberg of his potential. He recorded 8 points in the final 7 games of the season including the tie breaker game against the Edmonton Oil Kings.

As the season ended following the game against Edmonton Fischer went home and took to the gym. He knew he had to get bigger and stronger to have a healthy 19 year old campaign and be the player Tigers scouts saw back in 2013. August 2016, Zach arrived in Medicine Hat and from the get go, made his name known scoring a hat trick in the Tigers home opener becoming the first ever player to do so in the Canalta Centre.

Fischer’s season would unravel the potential and skill he had. A point a game player. 34 goals. 15 fights and an intimidating presence made him a “can’t miss” player night in and night out. Knowing scouts were usually in the stands on a nightly basis watching the names heard on TSN or Sportsnet, Fischer wanted to make his name one to watch in 2017.

“I tried not focusing on if I get drafted or who is watching me every night,” stated Fischer from his cabin in Alberta, “Instead I just told myself everyday to work hard and make each day better. As the season went on and we had success on the ice as a team, I was hoping my hard work would pay off and I would hear my name come June, I didn’t want to get my hopes up just in case, but I am thrilled that it happened.”

Although Fischer wasn’t in attendance for the NHL Draft, which took place in Chicago, he was keeping a close eye as the day unfolded Saturday. Fischer and his family were out at their cabin in Turtle Lake, Alberta for draft day when the news broke he would be the newsest prospect of the Calgary Flames.

“The first feeling I had was relief but then got super excited! I tried not watching the draft at all and watching the names listed on the draft board but then my mom and girlfriend came rushing out to me as I was working on our boat dock and said it had happened,” said an excited Fischer, “My agent called me soon after and then my phone just blew up with texts and calls from family and friends.”

Zach joins teammates Mason Shaw and newcomer Jordan Hollett to be drafted in Chicago. Shaw was selected by the Minnesota Wild in round 4 and Hollett was picked a round after Fischer by Ottawa. Being drafted at any position in the NHL is a great experience and for Fischer it was no different.

“Being drafted is a feeling that I will never forget for the rest of my life. I have been working my entire life to get to this milestone and to finally be able to achieve it is very exciting. It is a huge honor to be drafted by the Calgary Flames, a team that I watched as a kid. I am ready to bring my skills to camp and show everyone why they drafted me.”

As the 2017-18 season approaches Fischer is one of the handful of skaters Tigers brass will have to decide on due to overage status. But keeping the hulking winger seems inevitable based off of last season’s stats but the opportunity to play pro hockey also lurks in the wings for Fischer who could earn himself a contract come puck drop in September.

“I am going to work on my skating this summer as it is my main focus to be able to play at the next level. I want to go to camp, meet the new people within the organization and work hard to make the team. I am truly thankful to be a part of the Calgary Flames organization.”

If there is one thing young hockey players can learn from Fischer’s journey is to never give up and to always work hard, something that Zach has always preached to himself,

“When I didn’t get drafted into the WHL I was upset at first but I didn’t let it set me back. I used the rejection so to speak as motivation to keep going and get better both as a person and as a hockey player. I truly believe that if kids don’t get drafted it is okay. With hard work, determination and the right mindset anything can happen. Just work hard and you will get rewarded for the work you put in.”