FITTING END TO A HISTORIC NIGHT 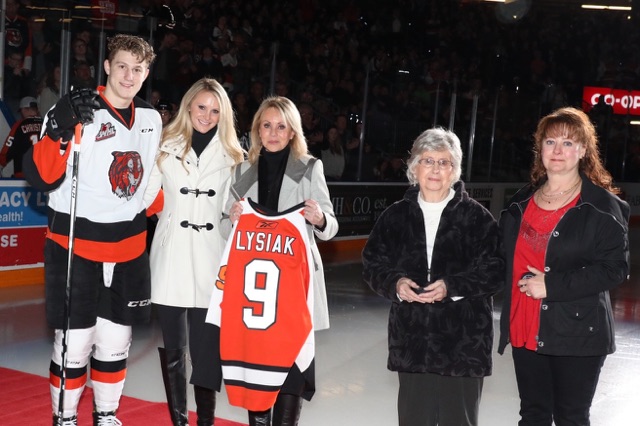 Medicine Hat, AB — Tom Lysiak night went off without a hitch Saturday at the Canalta Centre.

The Medicine Hat Tigers honoured a franchise legend by lifting Lysiak’s No. 9 to the rafters prior to puck drop in a heartfelt ceremony, then jumped all over the Brandon Wheat Kings in a 4-0 victory.

David Quenneville made his return to the scoresheet midway through the first period. The 18-year-old Edmonton product got back to his old tricks on the power play, ripping a point shot past Wheaties goaltender Logan Thompson to put Medicine Hat on the board.

Mason Shaw kept the momentum rolling a few minutes later with his 25th goal of the season to give the Tabbies some breathing room after 20 minutes, while goaltender Michael Bullion continued his hot streak with 12 saves in the frame.

The 19-year-old netminder has been on a tear since joining the Tigers on Jan. 1, and Saturday was no exception. Bullion made a handful of highlight reel stops while working in a few of his patented puck-handling moments before locking up his second shutout in five starts — and the second of his career — with a total of 26 saves.

Medicine Hat continued to chip away at Thompson in the second period before Mark Rassell broke through once more. The Calgary product beat Thompson clean over the blocker for his 30th goal of the year, joining linemate Max Gerlach as the second Tigers to achieve the feat. Matt Bradley and Zach Fischer are both sitting on 29 goals.

Rookie forward Gary Haden joined the scoring party early in the third period, snapping a shot off the crossbar and into the net to bring the crowd of 4,489 to its feet while sending the Wheat Kings onto their heels.

The Wheaties generated their best chance of the evening shortly after Haden’s marker. A Brandon 2-on-1 left Reid Duke staring down an open cage off the rebound, but Bullion sprawled across and stole away a sure thing with an incredible pad save.

The retirement of No. 9 forced Fischer to change numbers. The goal-scoring enforcer pulled off a Lysiak jersey and gave it to the Tiger alumnus’ family members in attendance after the ceremonial face-off, revealing his new number, 39. Fischer finished the game with an assist to help lift the Tigers to 44-18-1-0 on the season.

Tigers leading point-getter Chad Butcher increased his season tally to 89 with a pair of assists, while Rassell finished the evening with a goal and a helper.

Thompson still managed to eclipse a .900 save percentage with 45 stops on the night, but it wasn’t enough to keep Brandon from falling to a 28-25-6-3 record.

The Tigers travel to Prince Albert Wednesday to take on the Raiders.