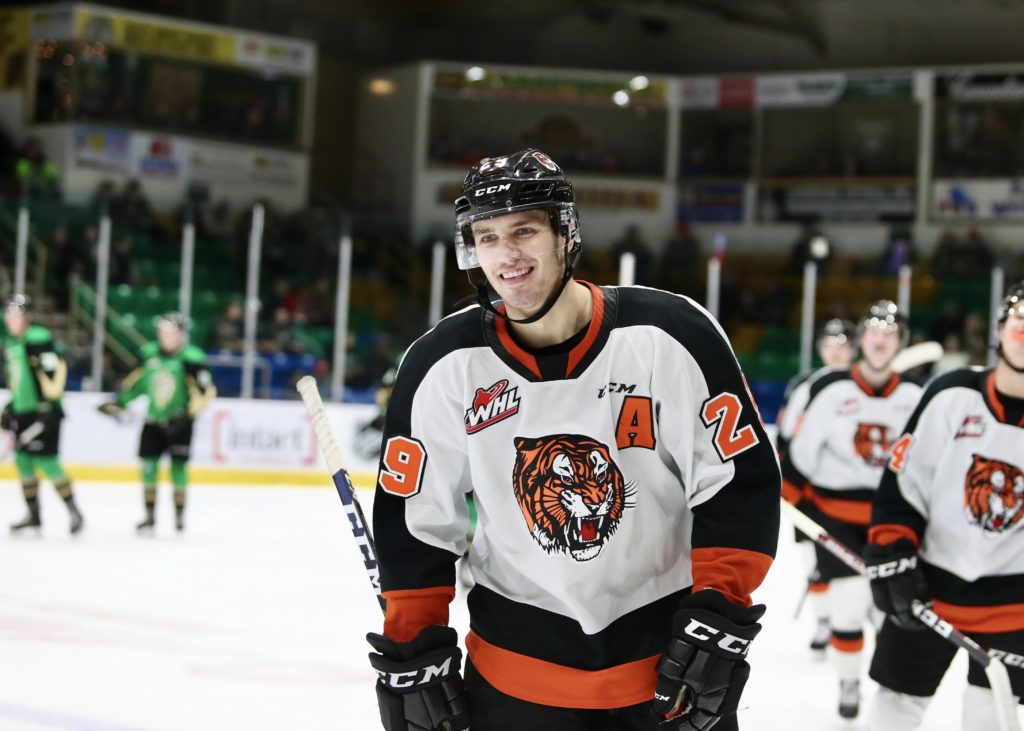 The Raiders had tied the game up 4-4 early into the final period before the Tigers scored four unanswered goals. Brett Kemp scored before Ryan Chyzowski added a pair and rounding it out was Cole Sillinger with a single goal. The 16-year-old rookie forward had a five point night (1G, 5A) while his linemates, Kemp and Chyzowski, each netted hat tricks in the contest.

Late in the opening period, Sillinger fired the puck on net and Brett Kemp was all alone to bury the rebound to score his first goal of the night.

Thirty-four seconds later, Sillinger passed to Kemp in the neutral zone who beat his man one on man before dancing the puck into the net for his second of the night to give the Tigers a 2-0 lead. Chyzowski also assisted on the play.

In the first minute of play of the second stanza, Sillinger won the puck behind the net and passed it out front to Chyzowski who fired it past Raiders goaltender Boston Bilious for his first of the night. Kemp picked up an assist on the play.

Just over three minutes later the Raiders found their way onto the scoresheet courtesy of Brayden Watts.

Midway through the frame, while the Raiders were on the power play Kaiden Guhle scored to cut the Tigers’ lead to 1.

The Tigers responded by being tenacious in the Raiders’ end and it paid off when Caleb Willms and Nick McCarry combined to set up Cole Clayton who fired it into the upper left hand corner to make it 4-2 for the Tabbies. Clayton’s goal was his second of the season.

With six seconds remaining in the period, the Raiders struck again when Spencer Moe scored his first of the night. The Tabbies headed to the dressing room leading 4-3 after two periods of play.

Thirty-four seconds into the final frame, Moe scored his second of the night to tie the game up 4-4.

Shortly after Moe tied the game up, while the Tigers were on the power play, Kemp snapped the puck on net to score his third of the evening and 14th of the season. Kemp’s hat trick is his second WHL career hat trick after he scored his first in March 2019 against the Red Deer Rebels. Elijah Brown assisted on the play.

On the Tigers’ next power play, Sillinger combined with James Hamblin to set up Chyzowski for second of the night.

Bilious left the game after Chyzowski’s second goal and was relieved by rookie netminder Carter Serhyenko. Bilious stopped 24 of 30 shots in 46 minutes and 51 seconds played.

With seven minutes left in the game, Kemp fed the puck to Chyzowski who one timed it in to score his first career WHL hat trick. Chyzowski now has 16 goals this season. Sillinger also assisted on the play.

Sillinger finished the game off by scoring with six seconds left to play. He fired the puck into the upper left hand corner for his 12th goal of the season. Clayton and Daniel Baker assisted on the play.

Tigers rookie goaltender Garin Bjorklund stopped 31 of 35 shots faced in the contest while Serhyenko turned aside 6 of the Tigers’ 8 shots he faced.

The Orange and Black are now 22-8-1-0 and they will travel to Red Deer on Friday to take on the Rebels. After Friday’s contest, the Tigers will return home Saturday to host the Edmonton Oil Kings for their final game before the holiday break. Fans are encouraged to bring new and unwrapped toys to Saturday’s game for the Wawanesa Insurance Toy Drive in support of the Medicine Hat News Santa Claus Fund. Tickets for the game can be purchased in person at the Canalta Centre Box Office or online.