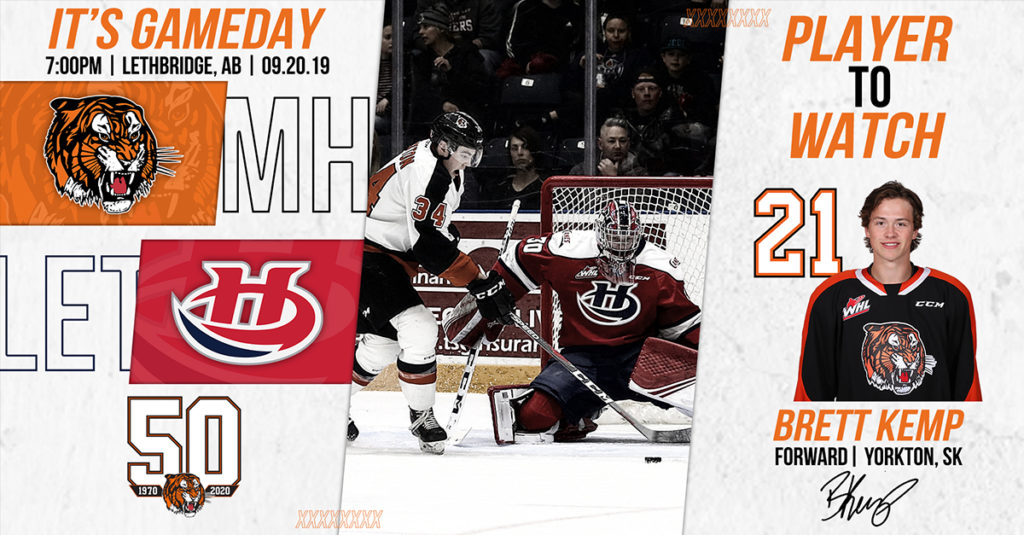 The Medicine Hat Tigers will open their 50th anniversary season with a home and home series against Central Division rivals, the Lethbridge Hurricanes. The Tigers have 15 returning veteran players and recently added 20-year-old Parker Gavlas to their roster to help bolster their blue line. The Tabbies will look to veteran forwards James Hamblin, Brett Kemp and Ryan Chyzowski to lead the charge offensively.

The Tigers and the Hurricanes are no strangers to opening their WHL campaigns by playing against each other. They have consistently faced off in a home and home series since the 2012-13 season with Medicine Hat boasting a 9-5-0-0 record against Lethbridge in the opening weekend series. Over the past five years, the Tabbies’ regular season record against the ‘Canes is 12-18-1-0.

After finishing second in the Central Division last season, the Lethbridge Hurricanes will have 12 returning players including goaltender Carl Tetachuk who posted a 3-0-0-0 record, a 1.67 GAA and a 0.949 SAV% against the Tabbies last season. The Hurricanes went 1-2-1-0 in preseason play and they were led by 2002 born forwards Alex Thacker (1G, 3A) and Chase Wheatcroft (1G, 3A).

Brett Kemp set new career highs in all offensive categories last season with 33 goals and 27 assists in 64 games played and he will be looking to build on that this season. The 19-year-old Yorkton, SK native is a smart, fast forward that has good hands and a great shot. Look for Kemp to drive to the net and create scoring lanes for the Tigers tonight.

Returning for his overage season, James Hamblin was selected by his teammates to captain the 50th edition of the Medicine Hat Tigers. The former first round bantam pick has played his whole WHL career in Orange and Black, suiting up for 261 games, scoring 79 goals and picking up 113 assists. Hamblin is a fast, skilled, two way forward with a relentless work ethic.