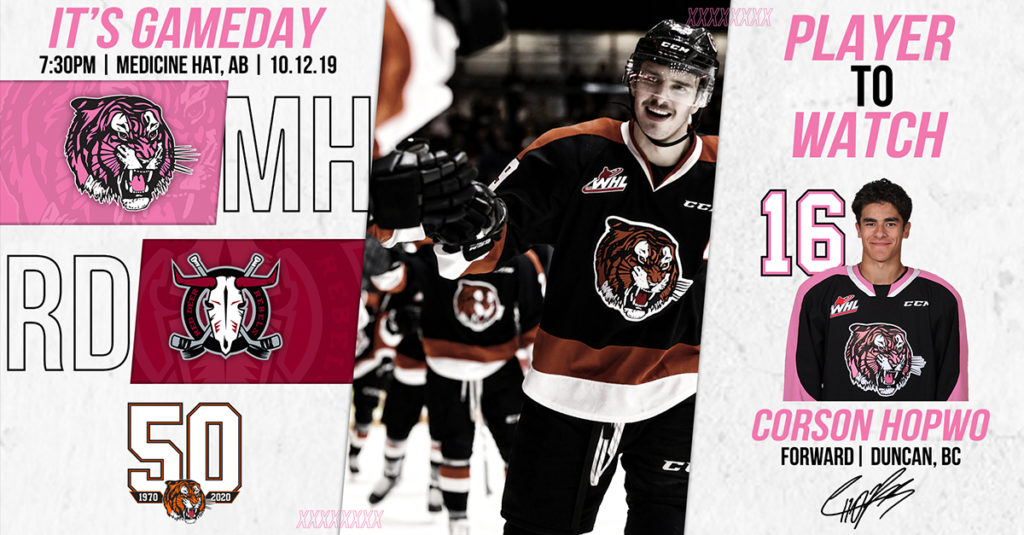 The Medicine Hat Tigers defeated the Winnipeg ICE 5-2 at the Canalta Centre on Friday night. Veteran forward Tyler Preziuso scored two goals while rookie netminder Garin Bjorklund stopped 29 of 31 shots faced. After tonight’s contest with the Rebels, the Orange and Black will host the Saskatoon Blades on Tuesday, October 15th before playing nine straight games on the road. The Tigers are 6-2-1-0 and they are led by Captain James Hamblin with 11 points (4G, 7A) in 9 games.

Tonight’s meeting between the Tigers and Rebels is their second of this season. Last Saturday these two Central Division rivals met and the Rebels came out on top in overtime. The last time Medicine Hat defeated Red Deer was March 13, 2019, when the Tigers won 7-4. Over the last five years, the Tabbies are 13-5-1-0 against the Rebels.

The Red Deer Rebels were kept off the scoresheet Friday night when they fell 5-0 to the Portland Winterhawks. After tonight’s tilt in Medicine Hat, the Rebels will return home for a four game homestand starting Friday, October 18th, against the Edmonton Oil Kings. The Rebels are 4-4-0-0 to start the season and they are led by Brett Davis with 7 points (4G, 3A) in 8 games.

Corson Hopwo is a hardworking, skilled forward in his second season with the Orange and Black. The 18-year-old Duncan, BC product brings energy, speed, high hockey IQ and good footwork into every game. In his career with the Tigers, Hopwo has 20 points (6G, 14A) in 68 games played. Look for Hopwo to drive to the net and create scoring opportunities tonight.

The Canadian Cancer Society is a national, community-based organization of volunteers whose mission is the eradication of cancer and the enhancement of the quality of life of people living with cancer. It is the largest charitable funder of breast cancer research in Canada and last year dedicated $16.4 million to fund a wide range of Canadian research projects related to breast cancer.