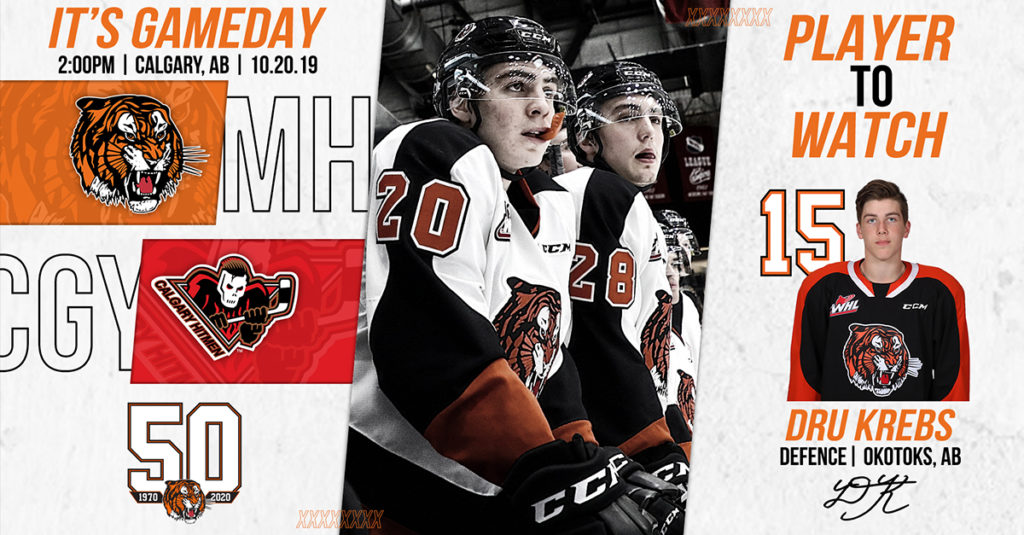 The Medicine Hat Tigers defeated the Saskatoon Blades 3-1 on Tuesday night. It was their last home game until November 16th since they will play the next nine games on the road starting this afternoon in Calgary against the Hitmen. The Tigers are 8-2-1-0 to start the season and they are led by veteran forwards James Hamblin with 14 points (5G, 9A) and Ryan Chyzowski with 13 points (7G, 6A).

This afternoon’s contest will be the second time these two Central Division Rivals have faced off this season. The Hitmen shut the door on the Tigers in a 2-0 victory September 29, 2019. The last time Medicine Hat defeated Calgary was November 4, 2018, in a 5-4 contest. The Orange and Black are 10-7-2-0 against the Hitmen over the past five years.

The Calgary Hitmen defeated the Moose Jaw Warriors 7-3 on Friday night improving their season record to 5-2-10. Forward Orca Wiesblatt had his WHL two-goal game on Friday and he also picked up an assist earning first star of the night. The Hitmen are led by 2019 Vancouver Canucks draft pick Carson Focht (6G, 6A) and Russia import Egor Zamula (4G, 8A) with 12 points each.

Rookie defenceman Dru Krebs scored his first career WHL goal on Tuesday night against the Saskatoon Blades. The 16-year-old Okotoks native was drafted by the Tigers in the second round of the 2018 WHL Bantam draft, 38th overall. He is a strong skating defenceman who likes to jump in offensively and who makes smart plays defensively.

Captain James Hamblin was named the WHL On the Run Player of the Week and he earned Vaughn CHL team of the week honours for the week of October 13th. The 20-year-old Edmonton product is a speedy, skilled two-way forward who leads his team by example with his hard work ethic and tenacity.
Quick Hits