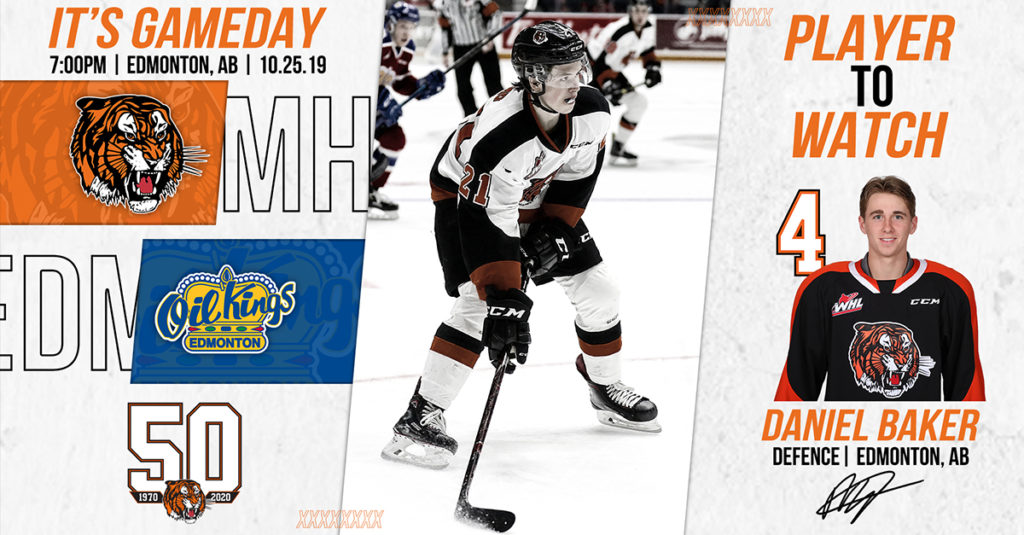 The Medicine Hat Tigers fell 6-3 on Sunday to the Calgary Hitmen. It was the Tigers’ first of nine straight road games. After tonight’s contest against the Oil Kings, the Tabbies will travel to Lethbridge to battle the Hurricanes on Saturday before leaving for a five game BC road trip. After the BC swing the Tigers will pay a visit to the Westerner Park Centrium to play the Rebels. Medicine Hat’s next home game is November 16th against the Oil Kings. The Orange and Black are 8-3-1-0 and they are led by veteran forwards James Hamblin (5G, 11A) and Ryan Chyzowski (9G, 6A) as well as rookie forward Cole Sillinger (8G, 7A).

Tonight’s game will be the first meeting between the Tigers and Oil Kings this season. The last time these two Central Division rivals faced off was in the 2019 Eastern Conference Quarter Finals where the Oil Kings came out on top in a 4-2 series. The Tigers are 13-3-2-0 against the Oil Kings in regular season play over the past five years. The last time Medicine Hat defeated Edmonton was January 16, 2019, in a 4-3 shootout. James Hamblin was the lone goal scorer in the shootout to win the game for the Tigers.

The Edmonton Oil Kings defeated the Red Deer Rebels 5-1 last Friday night. The Oil Kings had five different goal scorers in the contest while rookie goaltender Sebastian Cossa stopped 21 of 22 shots faced. Edmonton is now 8-1-3-0 and they are currently sitting in first place of the Central Division. They are led by veteran forwards Riley Sawchuk (6G, 8A) and Josh Williams (5G, 8A). After tonight’s game, the Oil Kings will host the Seattle Thunderbirds on Saturday.

Daniel Baker is a smart, two-way defenceman in his second season with the Orange and Black. The 18-year-old Edmonton native has 7 points (4G, 3A) in the Tigers’ last five games and he has now set a new career high in goals doubling his last season total. Baker is a calm, collected player with a great ability to the read the play. Look for Baker to make an impact on both ends of the ice for the Tigers tonight.

Captain James Hamblin is leading the Tigers offensively with 16 points (5G, 11A) so far this season and he is ranked 8th in the league for points. Hamblin is tied with Brett Kemp for most assists on the team with 11 each. The 20-year-old Edmonton product is a fast, skilled, two-way forward who leads his team by example through hard work and tenacity.