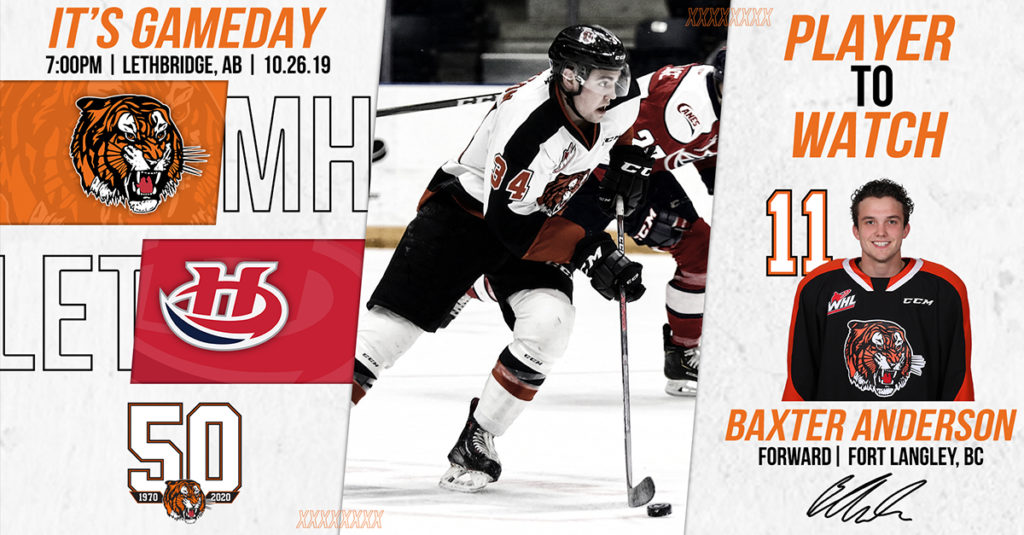 The Medicine Hat Tigers fell 4-2 to the Edmonton Oil Kings last night at Rogers Place. It was the Tigers’ second of nine straight road games. The Tabbies are 3-3-0-0 on the road this season and they are 8-4-1-0 overall. After tonight’s contest, the Orange and Black will depart on a five game BC road trip starting in Victoria next Saturday. The Tigers will stop in Red Deer after their BC swing to battle the Rebels before returning home November 16th to host the Oil Kings. Medicine Hat is led by veteran forwards Ryan Chyzowski (9G, 7A) and James Hamblin (5G, 11A) as well as rookie forward Cole Sillinger (8G, 8A), all with 16 points.

Tonight will be the third meeting between the Tigers and the Hurricanes this season. The two Central Division Rivals opened their 2019-20 campaign by splitting a home and home series. The Tigers took the first game 4-3 in a shootout in Lethbridge with rookie Cole Sillinger scoring the team’s first goal of the season midway through the second period while Ryan Chyzowski had the game winning goal in the shootout. On the Saturday night in Medicine Hat, the Hurricanes came out on top of a 3-1 game.

The Lethbridge Hurricanes extended their winning streak to six games in a row after defeating the Brandon Wheat Kings 5-2 on Friday night. Koletrane Wilson (2A) and Jett Jones (1G, 1A) each had a couple of points in the victory while goaltender Carl Tetachuk stopped 25 of 27 shots faced and picked up an assist. After tonight, the Hurricanes will travel to Manitoba to play back to back against the Winnipeg ICE and battle the Wheat Kings.

Baxter Anderson is a gritty, fearless forward in his third season with the Orange and Black. The 19-year-old Fort Langley, BC product is not afraid to mix it up and he is hoping to play a larger role on the Tigers team this season. Look for Anderson to agitate opponent’s as he helps create scoring lanes for the Tigers.

Captain James Hamblin is a shifty forward with deceptive speed who has 16 points (5G, 11A) in 13 games played. He has a great hockey sense and a tireless work ethic. Hamblin is not afraid to battle for the puck, set his teammates up or find the back of the net himself. Look for the 20-year-old Edmonton native to drive to the net and create scoring opportunities tonight for the Tabbies.