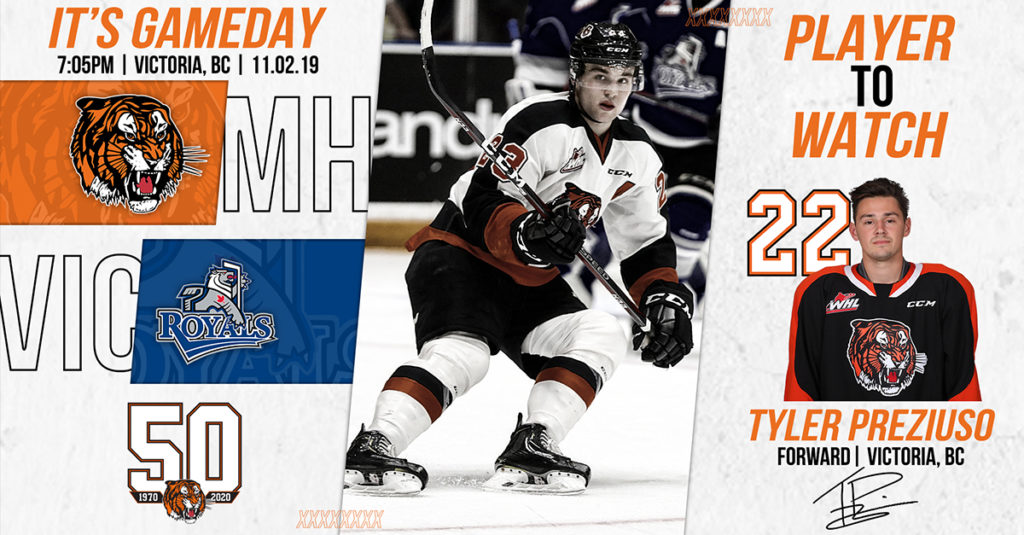 The Medicine Hat Tigers returned to their winning ways last Saturday night when they defeated the Lethbridge Hurricanes 3-2 in a shootout. Rookie goaltender Garin Bjorklund stopped 30 of 32 shots faced and all three shooters in the shootout. Tonight’s game is the Tabbies’ first game in a five game BC road trip. After tonight they will pay a visit to Langley Events Centre tomorrow afternoon to battle the Vancouver Giants. The Orange and Black are 9-4-1-0 and they are led by James Hamblin (6G, 11A), Ryan Chyzowski (9G, 8A) and Cole Sillinger (8G, 9A) all with 17 points each.

Tonight’s game will be the only meeting between these two hockey clubs this season. Their last meeting was Dec 29, 2018, in Medicine Hat when the Tigers won 4-2. Rookie goaltender Garin Bjorklund made his WHL debut in the contest and stopped 21 of 23 shots faced while veteran forward Ryan Chyzowski had a 3 point (1G, 2A) night. Over the past five years, Medicine Hat is 3-1-1-0 against Victoria.

The Victoria Royals hosted the Kelowna Rockets for a pair of games earlier this week. On Tuesday night, the Royals won 4-3 in a shootout. Veteran forward Kaid Oliver scored the game winning in the shootout while overage goaltender Shane Farkas stopped all three shooters. On Wednesday night, Victoria fell 1-0 to the Rockets. The Royals are 6-6-1-0 and they are led by veteran forward Tarun Fizer with 10 points (6G, 4A).

Tyler Preziuso is a smooth skating, well rounded forward with an explosive first step. The 20-year-old Victoria product is a career Tiger who to date has played 279 games for the Orange and Black, while picking up 124 points (50G, 74A). “Tyler brings great leadership on and off the ice. He is well respected by his teammates and gives it his all every night. His speed and tenacity on the puck make him hard to play against shift in and shift out,” said Assistant Coach Joe Frazer.

Captain James Hamblin is a fast, skilled, two-way forward who leads his team by example through hard work and tenacity. The 20-year-old Edmonton native is tied as one of the Tigers’ top point producers so far this season with 17 points (6G,11A). In his career as a Tiger, Hamblin has suited up for 275 games, scoring 85 goals and picking up 124 assists. Look for Hamblin to make an impact on both ends of the ice in tonight’s tilt.