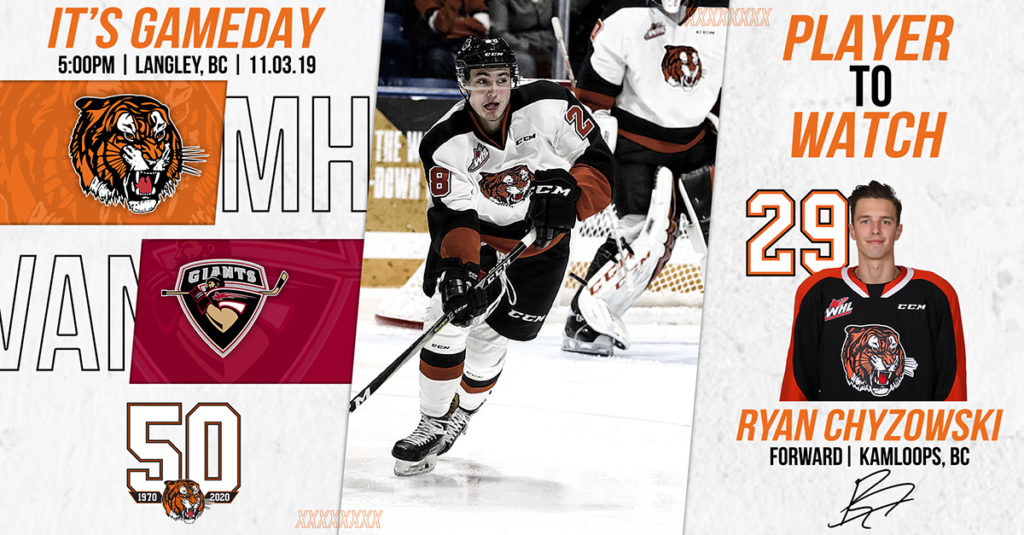 The Medicine Hat Tigers opened their five game BC road trip by defeating the Victoria Royals 6-3 Saturday night. Captain James Hamblin scored his first career WHL hat trick to help propel the Tigers to victory. After today’s game the Tabbies will head to Prince George to battle the Cougars on Wednesday night and they will finish their BC road trip by playing Kelowna on Friday and Kamloops on Saturday. The Orange and Black are 10-4-1-0 to start the season and they are led by their Captain Hamblin with 20 points (9G, 11A).

This afternoon’s game will be the only meeting between these two hockey clubs this season. The last time the Tigers and Giants faced off was January 2nd, 2019, in Medicine Hat with the Tigers coming out on top in a 4-3 victory. Captain James Hamblin had a three-point night (2G, 1A) in the game. Over the past five years, Medicine Hat is 2-2-1-0 against Vancouver.

The Vancouver Giants defeated the Tri-City Americans 6-3 at the Toyota Center last night. Today they return home to the Langley Events Centre to host the Medicine Hat Tigers. After tonight’s contest, the Giants will host the Portland Winterhawks on Friday. The Giants are led by 2020 NHL Draft Eligible forward Justin Sourdiff with 16 points (8G, 8A) in 17 games played. Vancouver is 8-8-1-0 and they are currently in 3rd place in the BC Division.

Ryan Chyzowski is a reliable 200-foot player that competes and can shoot the puck hard. The 19-year-old Kamloops product opened the scoring for the Tigers less than a minute into last night’s tilt against the Royals. Chyzowski is the Tigers’ leading goal scorer with 10 so far this season and he is tied for second top point producer for the Orange and Black with linemate Brett Kemp. Both players have 19 points so far this season. Look for Chyzowski to make an impact in tonight’s contest.

James Hamblin is the Tigers’ top point producer with 20 points (9G, 11A) so far this season. In 276 games played for the Orange and Black, the 20-year-old Edmonton native has 88 goals and 124 assists. Hamblin is a fast, skilled, two-way forward who leads his team by example through hard work and tenacity.