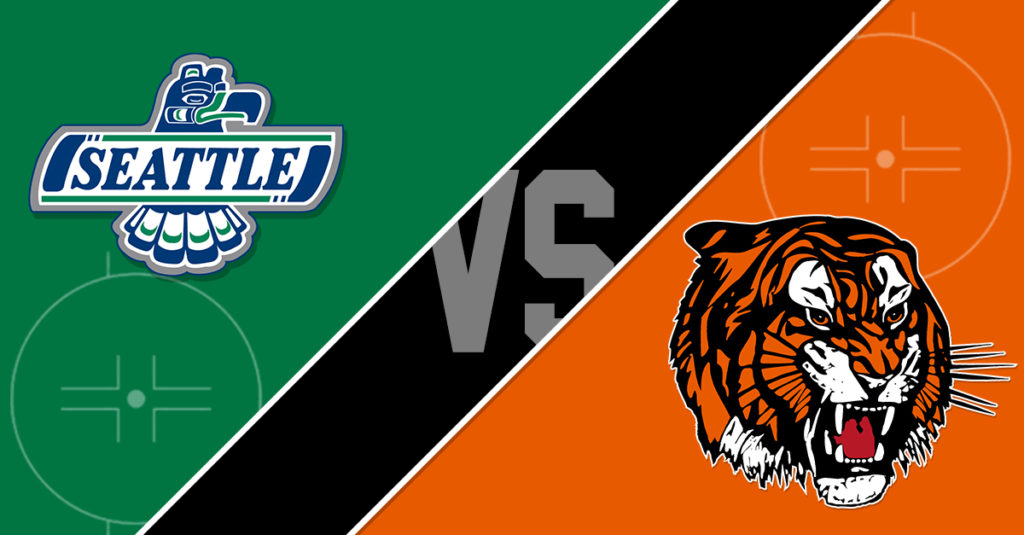 VS SEATLE — The Medicine Hat Tigers will play their 2nd game in as many nights as the defending WHL Seattle Thunderbirds are in town. The Tigers are coming a huge 7-2 win over the Saskatoon Blades on Friday night. This will be the first and only meeting this season between these two clubs. Medicine Hat will look to make it 2 in a row tonight. While the Thunderbirds are riding a four game winning streak of their own, coming off a 3-1 win over the Edmonton Oil Kings.

Who to Watch:
Tigers – Tyler Preziuso is having a strong start to the 2017-2018 WHL campaign. Preziuso has recorded 5 goals, 8 assists for 13 points through 15 games. Tyler is coming off a 3 point night over the Saskatoon Blades with 2 goals and 1 assist.  Thunderbirds – Defencemen Austin Strand is leading the scoring charge for the Seattle registering 10 points in his last 6 games.

The Tigers made a splash at the annual CHL Import Draft this summer. Linus Nassen was selected in the second round by the Tigers and comes to Medicine Hat via Sweden. Nassen was drafted by the Florida Panthers in the 3rd round of the 2016 NHL entry draft. Nassen has 11 points in 15 games and is quickly forming a deadly offensive combination with David Quenneville. Kristians Rubins, who was selected by the Tigers in the 2016 CHL Import draft is the first Latvian born player to ever suit up for the Orange and Black.

The Tigers acquired 18-year-old netminder Jordan Hollett from the Regina Pats in the offseason. Hollett is a 6th round selection of the Ottawa Senators and currently is sporting a 5-3 record with a 3.45 GAA and a .881 SV% The Orange and Black also have veteran goaltender Michael Bullion. Bullion has a 4-3 record posting a .886 SV% and a 3.45 GAA.