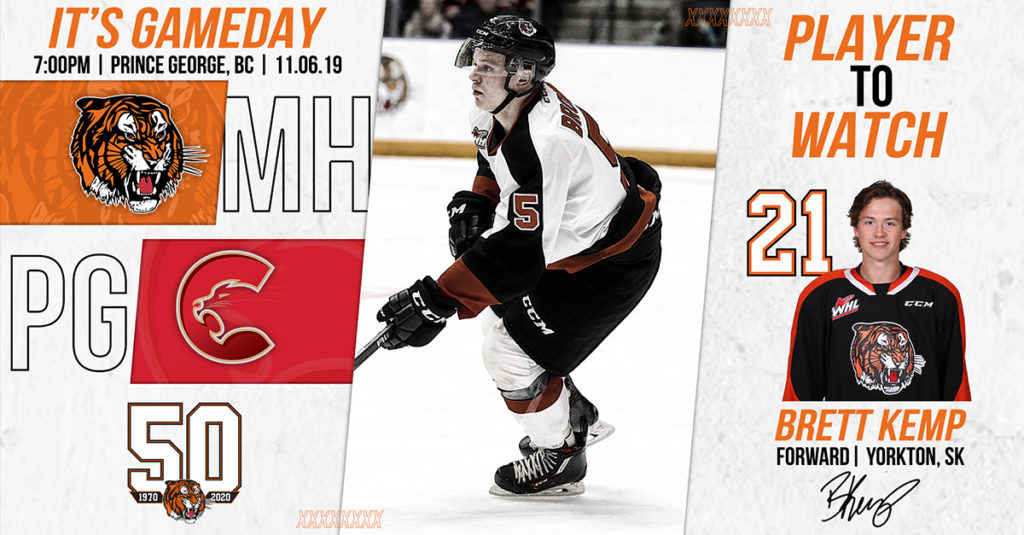 The Medicine Hat Tigers are 1-1-0-0 so far on their five game BC Road Trip and 10-5-1-0 this season. The Tabbies opened the trip by defeating the Victoria Royals 6-3 on Saturday but falling 5-2 to the Vancouver Giants on Sunday. After tonight’s contest in Prince George, the Tigers will travel to Kelowna Friday and Kamloops on Saturday. The Orange and Black are led by veteran forwards James Hamblin (9G, 11A) and Brett Kemp (3G, 17A) with 20 points each.

Tonight’s contest is the only meeting between these two hockey clubs this season. The last time the Tigers and the Cougars faced off was October 12th, 2018, in Medicine Hat, with the Tigers winning 4-1. Veteran forwards Tyler Preziuso (1G, 1A) and Ryan Chyzowski (2A) each had two points in the contest. Medicine Hat is 4-1-0-0 against Prince George over the past five years.

The Prince George Cougars fell 6-0 to the Spokane Chiefs in their last game on Saturday night and they will be looking to rebound tonight. The Cougars are led by veteran forward Josh Maser with 11 points (6G, 5A) in 16 games played. Prince George is 4-11-0-1 to start the season.

Brett Kemp is a smart, fast forward that has good hands and a great shot. The 19-year-old Yorkton, SK native has been the Tigers’ top set up man so far this season with a team leading 17 assists. He is in a three way tie for most assists in the league. Look for Kemp to control the play and create opportunities for the Tigers in tonight’s battle.

Captain James Hamblin is a fast, skilled, two-way forward who leads his team by example through hard work and tenacity. The 20-year-old Edmonton native is tied as one of the Tigers’ top point producers so far this season with 20 points (9G,11A). In his career as a Tiger, Hamblin has suited up for 277 games, scoring 88 goals and picking up 124 assists. Look for Hamblin to make an impact on both ends of the ice in tonight’s tilt.