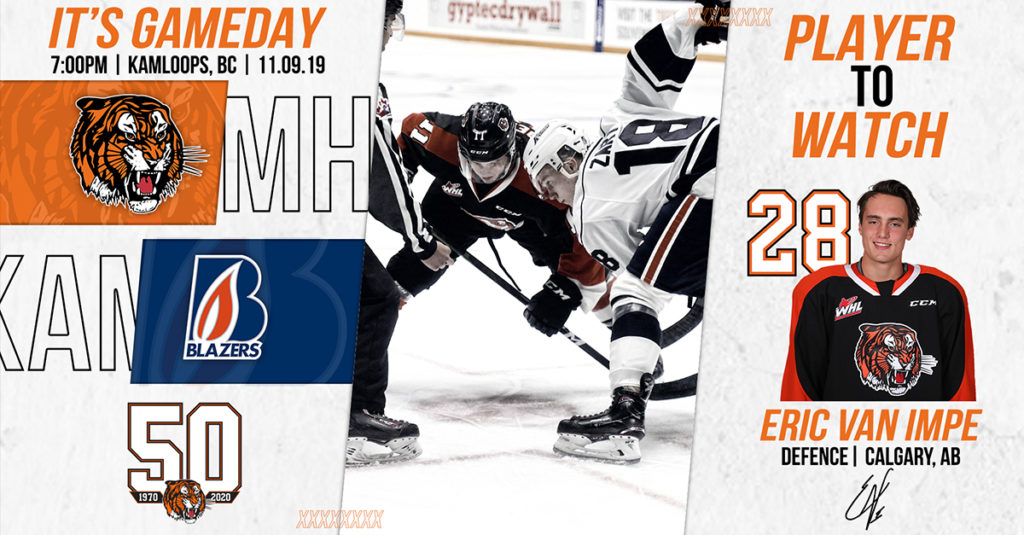 The Medicine Hat Tigers defeated the Kelowna Rockets 8-5 last night at Prospera Place. The Tabbies had eight different goal scorers in the contest and they improved their BC road trip record to 3-1-0-0. Medicine Hat is led by veteran forwards James Hamblin with 23 points (11G, 12A), Ryan Chyzowski with 22 points (10G, 12A) and Brett Kemp with 22 points (5G, 17A) and they are 12-5-1-0 on the season.

Tonight’s game will be the lone meeting between the Tigers and Blazers this season. The last time these two hockey clubs meet was December 12th, 2018, in Medicine Hat with the home team winning 4-2. Goaltender Mads Søgaard stopped 36 of 38 shots faced in the contest. Over the past five years, the Tigers are 2-4-0-0 against the Blazers.

The Kamloops Blazers defeated the Seattle Thunderbirds 7-4 last night in Washington. Veteran forward Brodi Stuart had a four point (1G, 3A) night in the victory. The Blazers are 11-6-0-0 and they are led by veteran forwards Connor Zary with 26 points (10G, 16A) and Zane Franklin with 23 points (9G, 14A).

Eric Van Impe is an offensive defenceman in his second season with the Orange and Black. The 6’3 Calgary product has good hockey sense and he is not afraid to mix it up. Van Impe has a lethal shot from the point and he has already set new career highs in assists (5) and points (7) this season. Look for Van Impe to make an impact at both ends of the ice in tonight’s contest.

Captain James Hamblin is the Tigers top point producer with 23 points (11G, 12A) in 18 games played. The 20-year-old Edmonton native has been finding success on the team’s five game BC road trip with 6 points (5G, 1A) in the four games played in BC so far. Hamblin is a speedy, hardworking, determined two-way forward who leads his team by example. He can be counted on in all situations during the game.