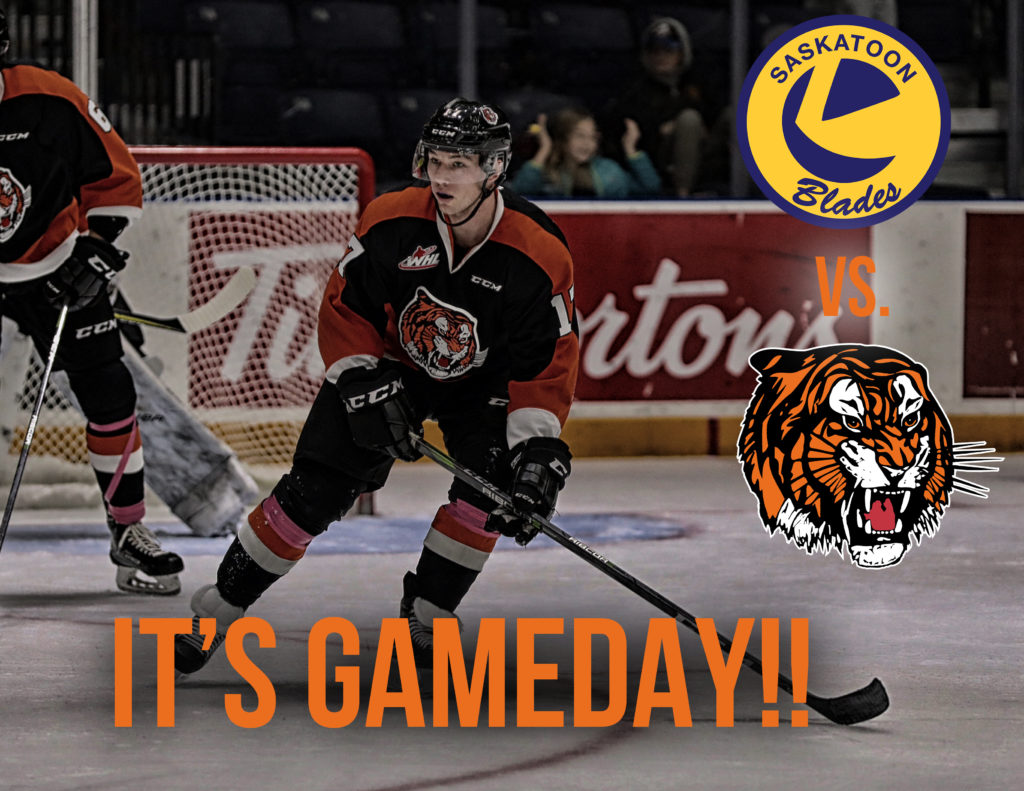 The Medicine Hat Tigers split last weekend with the Calgary Hitmen. Friday night the Tigers fell 7-5 in Calgary before returning home to defeat the Hitmen 5-4 on Sunday. The Tigers are 9-7-0-2 this season and will have a two-game homestand this weekend before leaving for a 4 game in 5 days Eastern Conference road trip that starts Tuesday in Saskatoon. The Orange and Black are led by veteran forwards James Hamblin with 22 points (9G, 13A) and Tyler Preziuso with 18 points (9G, 9A).

Tonight will mark the second time this season the Tigers and the Blades face off. After tonight’s tilt, the two rivals will meet again on Tuesday night in Saskatoon. The Blades took the first contest between these two clubs 4-3 in a shootout back in September. It was Tigers’ rookie netminder Mads Sogaard’s first Career WHL game and he stopped 39 of the Blades’ 42 shots. Over the past 5 years, the Tigers are 9-3-0-1 against the Blades.

The Saskatoon Blades are 10-7-2-0 so far this season. Last weekend the Blades were busy playing three games in three nights for the second straight weekend. They hosted the Kootenay ICE Thursday night (L 4-2), travelled to Moose Jaw Friday (W 5-2) and visited the Brandt Centre in Regina Saturday (L 6-5). The Blades are led by 2019 NHL Draft Eligible Kirby Dach who has 32 points (11G, 21A) in 19 games so far this season.

Logan Christensen is a hard-working, gritty forward centering the third line for the Tigers. The 19-year-old Lundar, MB product is an intelligent forward whose solid defensive play and ability to make an impact offensively have helped him become a consistent, two-way player. Christensen has great hands and sees the ice well. Look for Christensen to make a difference in both ends of the ice in tonight’s contest.

Tigers Captain James Hamblin is a hard working, two way forward who has been leading the team by example on and off the ice this season. On the ice, the Captain has 22 points (9G, 13A), off the ice, he has participated in every team event in the community including our most recent Skate with the Tigers in Ralston and our first Subway Stay in School visit at the Little Explorers Preschool.

Medicine Hat CrimeStoppers is a community based non-profit organization which has just celebrated its 35 year anniversary here in Medicine Hat. Working with local businesses in the community has helped CrimeStoppers to prevent crime before it happened. To report a crime, call CrimeStoppers are 1-800-222-TIPS.