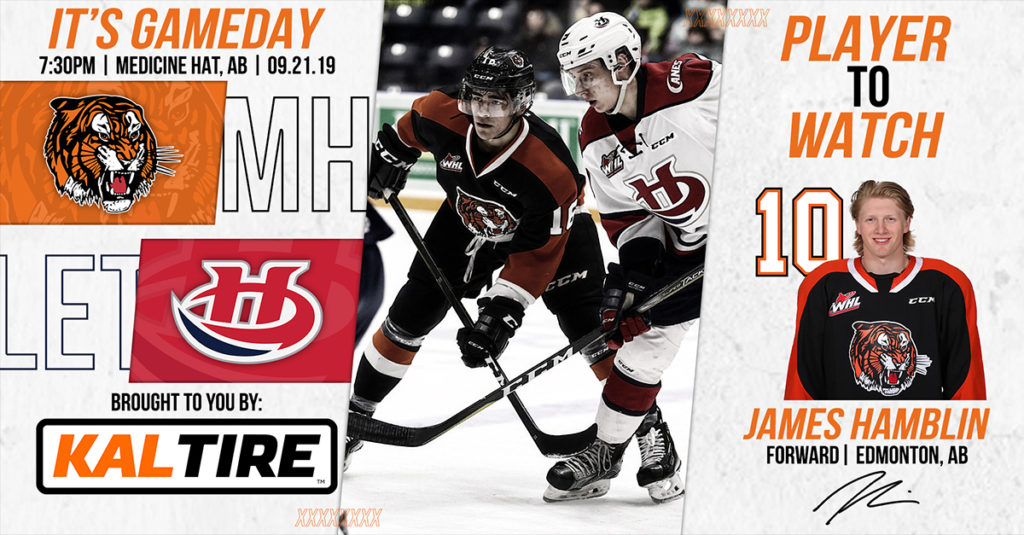 The Medicine Hat Tigers kicked off their 50th anniversary season by coming from behind to defeat the Lethbridge Hurricanes 4-3 in a shootout last night at the Enmax Centre. Trailing 3-1, the Tigers tied the game up midway through the final frame with goals from alternate captains Bryan Lockner and Ryan Chyzowski. After a five minute three on three overtime, Chyzowski scored the game winning goal in a shootout.

The Tigers and the Hurricanes are no strangers to opening their WHL campaigns by playing against each other. They have consistently faced off in a home and home series since the 2012-13 season with Medicine Hat boasting a 10-5-0-0 record against Lethbridge in the opening weekend series. Over the past five years, the Tabbies’ regular season record against the ‘Canes is 11-14-0-0.

The Lethbridge Hurricanes dropped their home opener 4-3 in a shootout to the Medicine Hat Tigers. Dino Kambeitz finished the night with 2 points (1G, 1A) while goaltender Carl Tetachuk stopped 48 of 51 shots faced. Tonight the Hurricanes are expected to add a couple familiar faces to their roster with Koletrane Wilson returning from a one game suspension and Calen Addison being reassigned from the Pittsburgh Penguins.

Ryan Chyzowski not only scored the game tying goal to send last night’s tilt to overtime but he scored the game winning goal in the shootout. They 19-year-old Kamloops product is a reliable 200-foot player that competes and can shoot the puck hard. Chyzowski set new career highs in goals (27) and points (55) last season and he will be looking to build off that this year.

Returning for his overage season, James Hamblin was selected by his teammates to captain the 50th edition of the Medicine Hat Tigers. The former first round bantam pick has played his whole WHL career in Orange and Black, suiting up for 262 games, scoring 79 goals and picking up 113 assists. Hamblin is a fast, skilled, two way forward with a relentless work ethic.

Kal Tire is Canada’s largest independent tire dealer and one of North America’s largest commercial tire dealers. Founded by Tom Foord in 1953, and based in Vernon, BC, Kal Tire has expanded steadily and now employs more than 6,500 team members internationally.