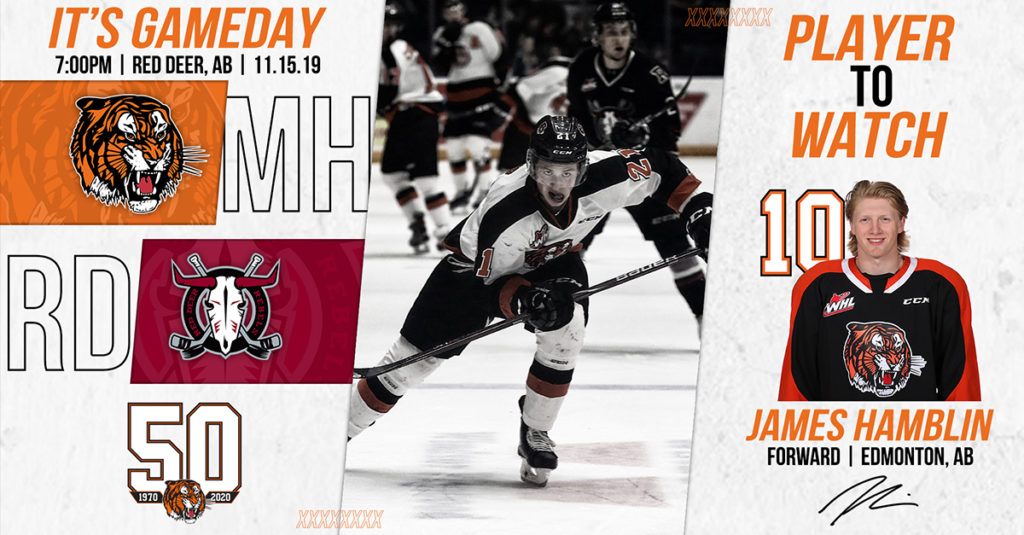 The Medicine Hat Tigers return to Alberta after a five game BC swing where they went 3-2-0-0 and improved their overall season record to 12-6-1-0. Tonight’s game will be their ninth straight road game since they have not played at home since they hosted the Saskatoon Blades October 15th and won 3-1. Overall the Tabbies are 7-5-0-0 on the road this season. After tonight’s battle they will return home to host the Edmonton Oil Kings. The Orange and Black are led by Captain James Hamblin with 28 points (12G, 16A) and veteran forward Brett Kemp with 23 points (5G, 18A).

Tonight’s game will be the third meeting between these two Central Division Rivals this season. Red Deer won the first battle 4-3 in overtime with Chris Douglas scoring the game winner 38 seconds into extra time. The following weekend, Medicine Hat won the second contest 9-1 and they had six different goal scorers. Both games were played in Medicine Hat. Over the past five years the Tigers are 14-5-1-0 against the Rebels and 7-2-0-0 when playing in Red Deer.

The Red Deer Rebels defeated the Prince Albert Raiders 3-2 last Saturday night and they return home to host the Tigers for the first game of a four game homestand. Goaltender Ethan Anders stopped 31 of 33 shots faced and earned first star of the game. The Rebels are 5-11-0-2 so far this season and they are led by veteran forward Brett Davis with 14 points (5G, 9A) and their Captain Dawson Barteaux with 12 points (4G, 8A).

Captain James Hamblin was named the WHL On the Run Player of the Week for the week ending November 10th, 2019, and he was also named to the CHL Team of the Week.  During that week, the 20-year-old Edmonton product led all WHL scorers with 8 points (3G, 5A) in three games played improving his season total to 28 points (12G, 16A) in 19 games. After being drafted 17th overall by the Tigers in 2014, Hamblin has suited up for 280 games, scored 91 goals and picked up 129 assists. He is a speedy, hardworking, determined two-way forward who leads his team by example.