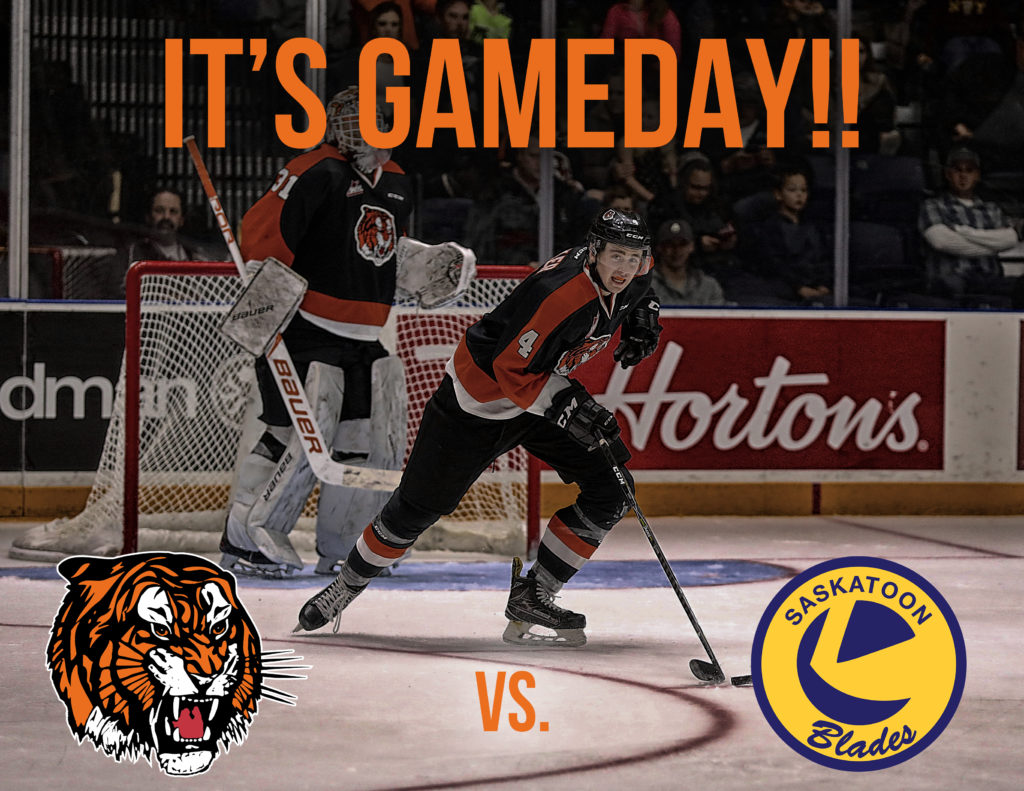 After a three-game homestand where the Medicine Hat Tigers posted a 1-1-1-0 record, the Tigers will head East for a 4 games in 5 days road trip. The first stop is tonight against the Saskatoon Blades before travelling to Prince Albert to battle the Raiders tomorrow. The Tabbies will finish the trip by paying visits to Brandon on Friday and Swift Current on Saturday. The Orange and Black are 9-8-1-2 so far this season and they are led by Captain James Hamblin with 24 points (9G, 15A) and veteran forwards Tyler Preziuso (9G, 9A) and Ryan Jevne (6G,12A) with 18 points each.

For the third and final time this season, the Tigers and Blades will face off. The first two contests between these two clubs were close affairs with the Blades coming out on top. The first meeting was a 3-2 shootout win for the Blades in September and the second meeting was Friday night’s 3-1 contest in Medicine Hat. The last time the Tabbies beat the Blades was 3-2 on Jan 10, 2018. Over the past five years, the Orange and Black are 5-1-0-1 against the Blades when visiting the SaskTel Centre and the Tabbies will look to return to their winning ways tonight.

The Saskatoon Blades return home after playing their last four games on the road and posting a 3-1-0-0 record. Saskatoon’s most recent victory came Saturday night against the Kootenay ICE in a 2-1 contest. The Blades are 12-7-2-0 so far this season and they are led by 2019 NHL Draft Eligible Kirby Dach with 34 points (11G, 23A) and veteran defenceman Dawson Davidson with 23 points (4G, 19A).

Trevor Longo is a hard-nosed defenceman in his second season with the Orange and Black. The 18-year-old North Vancouver native is a physical player who isn’t afraid to mix it up and to block shots. Longo has good offensive instincts and he scored his first Career WHL Goal in Saturday’s contest against the Oil Kings. Look for Longo to make an impact on both ends of the ice in tonight’s tilt.

Tigers Captain James Hamblin is the top point producer on the team with 9 goals and 15 assists in 20 games played this season. Hamblin leads the team by example with his hard work ethic, hustle and heart. The 19-year-old Edmonton product is a fierce forechecker and an offensive generator. Look for Hamblin to lead the Tigers in both ends of the ice tonight.